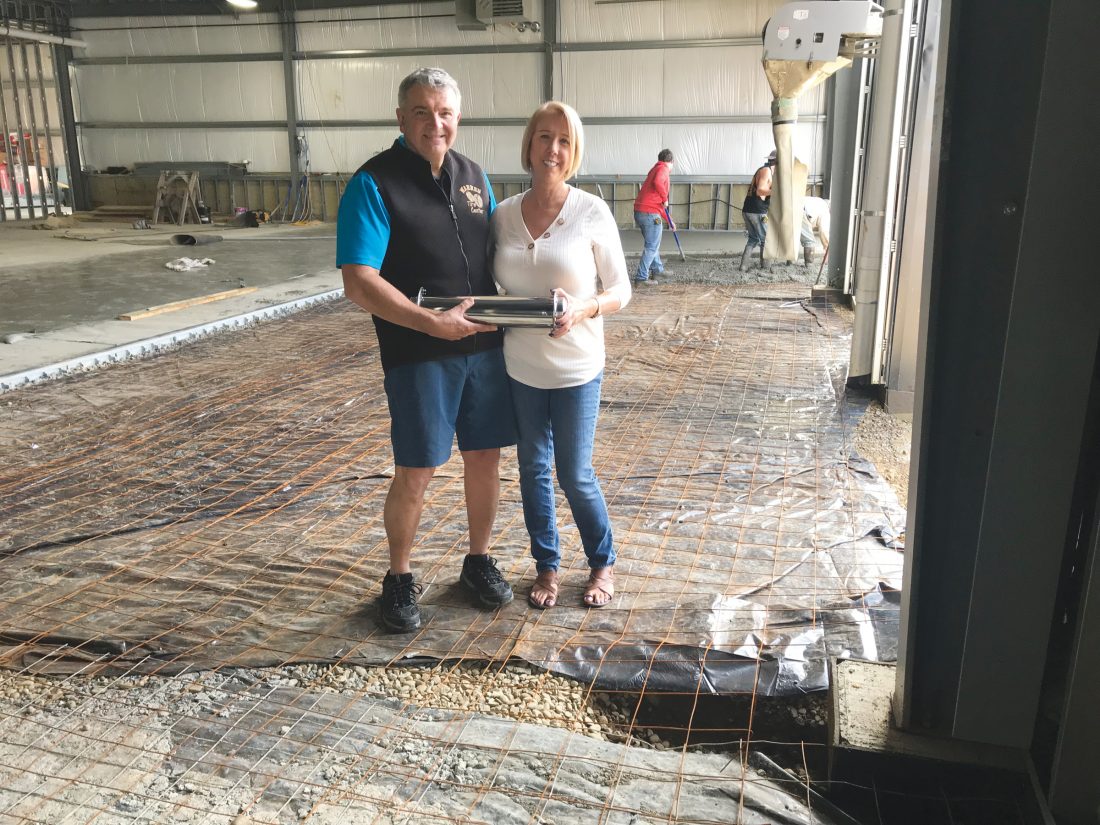 After fire destroyed Warren Tire Center a year ago, owners Corky and Carolyn Fry made the best of the rebuilding process.

The Frys decided to bury a time capsule to capture the essence of 2019 Warren County beneath the new concrete floor.

Corky Fry had some experience with another time capsule that inspired him.

“Back here years ago, when they tore down Lacy School, they had a time capsule,” he said.

Time capsules are meant to stand up to dirt and water and pressure. They are not always easy to open.

“They brought it over to us and we had to hacksaw it open,” Fry said.

After playing a major role in getting the thing open, Fry got to see what was inside. “They had a current newspaper,” he said. “They had some paper money and old photos of downtown Warren.”

Having no other experience with time capsule installation, Carolyn Fry went to the Warren County Historical Society for advice.

“My wife went and asked for some input,” Fry said. “They advised us on what kind of canister to buy, how to prepare it, and how to bury it.”

The stainless steel canister is about 30 inches long and eight in diameter. It has eight bolts on each end that pull the caps and body together at urethane seals. The whole contraption was wrapped in thick plastic and buried, then the new concrete floor was poured.

Fry said there is a marker in a corner of the center showing the location of the capsule.

Fry remembered the Lacy School time capsule and used it as a basis for his own.

“We put in a couple cover letters — the world today through our eyes. We didn’t get political,” Fry said. “We longed for the days of our childhood growing up. I wish today’s kids could have that environment.”

“We put in the current Times Observer,” he said. “Paper money and coin money. We did put an American Flag in.”

“John Papalia at the Chamber (Warren County Chamber of Business and Industry) was very generous,” Fry said. “He gave us the 2019 Chamber Book.”

That publication includes photos and descriptions of local businesses and events and “it gives a good deal of information about demographics,” Papalia said.

Beyond that, “We tried to be creative,” Fry said. “There were a few photos that were not in the Chamber Book. United Refining was one of them. We had a real good picture of them. We had a good photo of Kinzua Dam. We put in a photo of Warren State Hospital and a nice photo of Struthers Library Theatre.”

“We have a real cool drone photo of the city, downtown,” he said.

And, there was one more item.

“The one thing that I put in it, she fought me on this, I put a Twinkie in there,” Fry said.

He heard they are essentially good forever, so he is giving someone in the future a shot at a literal taste of 2019. “Whether they dare bite into it, I don’t know,” he said.

He did not set any solid date for digging it up and running the Twinkie test, but it will take some work. “In order to get to it, they’re going to have to jackhammer,” he said.

“I think down the road it will be very entertaining. I think we gave a very good overview of the county,” Fry said. “When they pop that baby open I think it will give a good idea of what the world was like in 2019.”