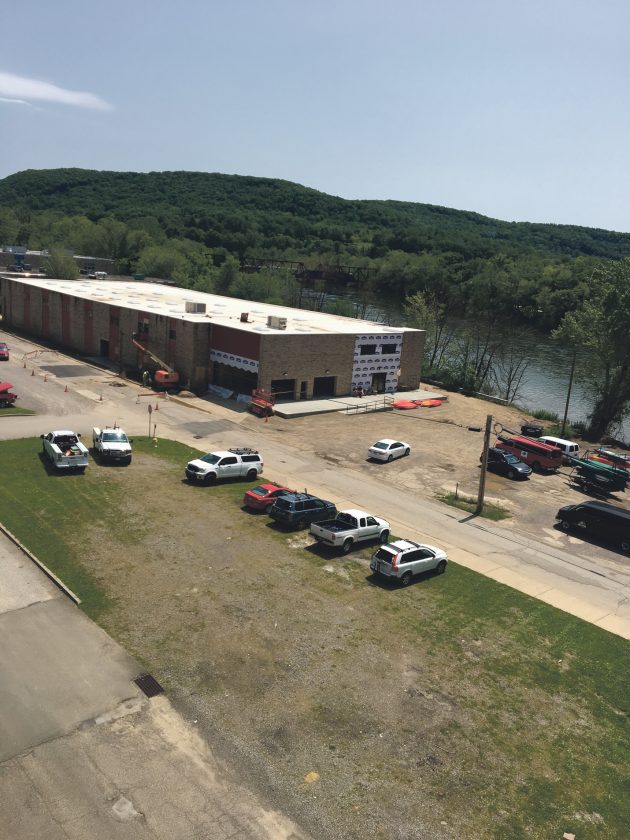 Times Observer photo by Josh Cotton Work continues on renovation at the former Loranger building on the City of Warren’s riverfront. Whether there will be space for a proposed hotel is still up in the air as the merchants slated to utilize the Loranger building explore whether the property would needed for parking.

Successful development in downtown Warren is putting a different development proposal on hold.

The ongoing work at the Loranger building – a multi-million dollar renovation aimed at creating riverfront commercial space – is moving ahead.

That puts a proposal for a downtown hotel “on hold,” according to City Manager Nancy Freenock.

“The redevelopment of the Loranger building brought with it the need for additional parking along Clark Street and the riverfront; this is the area proposed for the hotel,” she explained. “This summer, the merchants located at the Loranger site are studying their need for parking. If both uses – parking and the hotel – can be accommodated, they will be.”

If not, she said that state funding already allocated to the project “will, pending Council approval, be used to improve the infrastructure along Clark Street.”

The Loranger building project was first before Warren City Council in December 2017.

The city proposed to allocate funds for the acquisition of the building and the state Commonwealth Finance Agency was prepared to loan HIY, Inc., whose president is Ruzhdi Bakalli, over $2 million for the rehabilitation of the building.

Bakalli told council that once completed, the building “will be a prime commercial space” as well as offer office, hospitality and retail space.

He said completing the project will “make a big difference to the downtown area of Warren (and) a big benefit for the City of Warren.”

The status of another major downtown initiative – a senior living facility on the corner of Pennsylvania Ave. W. and Liberty St. – is still pending.