Ike grad and Jackals owner has a vision 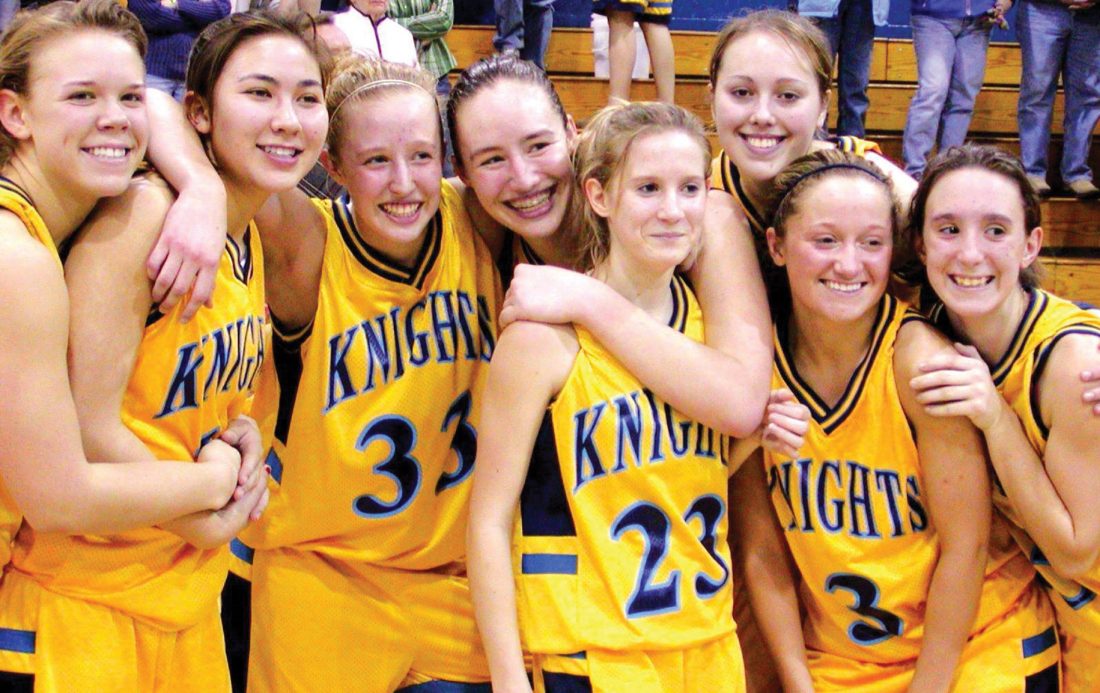 There isn’t anything about Kayla Crosby that surprises Maceo Wofford.

That wasn’t always the case.

Wofford is one of the best basketball players to ever come from Jamestown, N.Y. He scored 2,259 career points at Jamestown High School, and the New York all-state guard went on to score 868 more points and play in two NCAA tournaments with Division I Iona College. But when he walked into the Jamestown Community College gym a few years ago, he didn’t know who Kayla Crosby was. And Crosby, according to Maceo, didn’t know how to handle a bunch of hyped-up, uber-competitive male basketball players.

Wofford recalls her face would get red every time an argument would result in a little pushing and shoving.

“She was just this bubbly, friendly, not-sure-what-to-do type of person,” said Wofford. “But you kind of had to go through her (to get some gym time).” 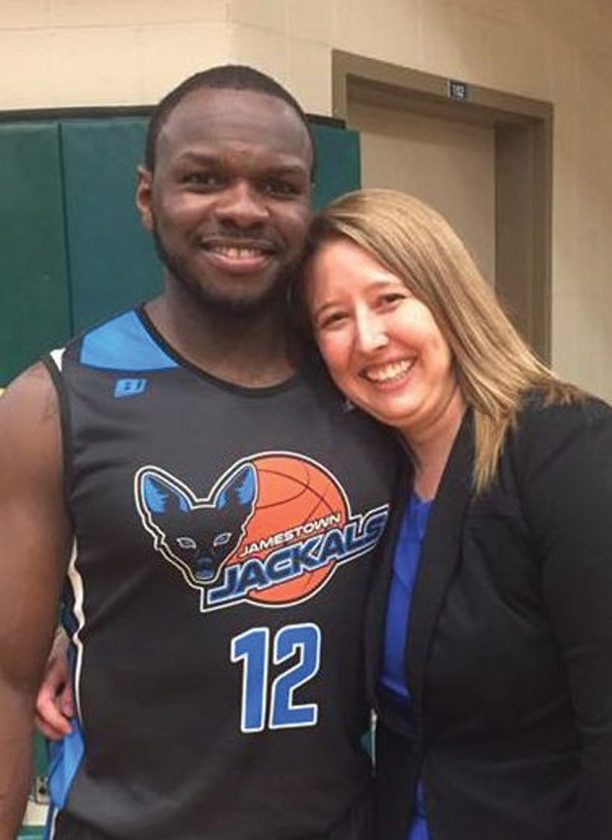 After graduating from St. Bonaventure University, Crosby worked at JCC as a residence director, living on campus.

“I found myself writing a lot of incident reports,” she said.

She said Maceo and the guys that came in that one day “just had a different demeanor.” 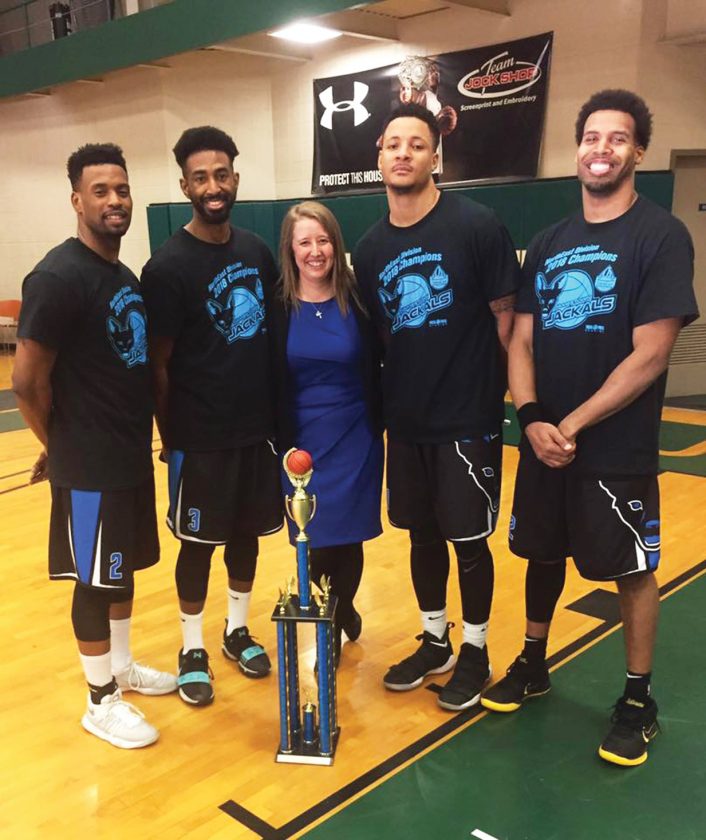 Facebook photos Kayla Crosby with members of the Jamestown Jackals.

She was drawn to that.

“That’s when I was introduced to Maceo Wofford,” she said.

And their lives haven’t been the same since.

For one, Wofford — now in his late 30’s — is still playing basketball, maybe partly due to Crosby. 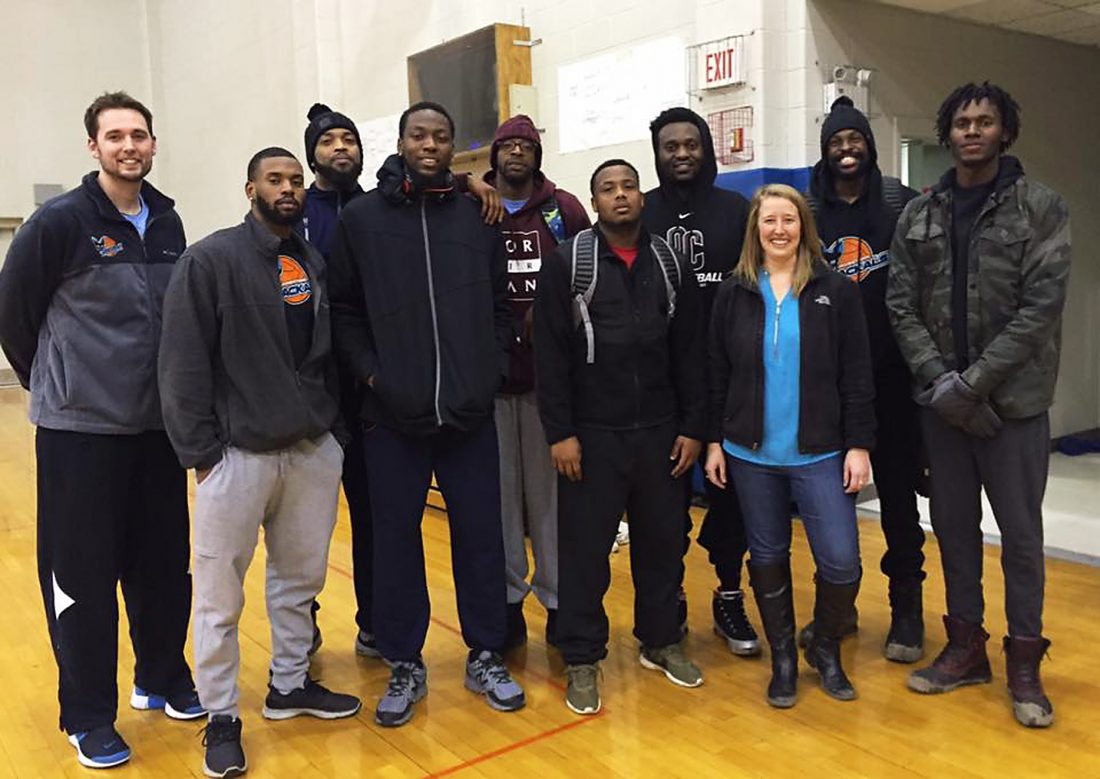 And Crosby, almost 30, owns the team Wofford plays for.

Crosby met Wofford about the same time he was trying out for the Erie Hurricane semi-pro basketball team of The Premier Basketball League.

“I looked online for the Premier Basketball League, and there was a link that said ‘Own a Team,'” said Crosby.

It wasn’t really what Crosby wanted to do — because she now has a full-time profession as Director of Campus Life at JCC — but more about who she is.

“I like helping people, and I saw that the ownership group owned two teams — Erie and Buffalo — so I was just trying to help out,” said Crosby. “I just became as involved as possible.”

She was also becoming great friends with Maceo and quite a few of the players, “and I really saw the potential,” she said. “I kept coming up with ideas.”

She also saw basketball and a basketball team as a way to provide entertainment at JCC.

She started going to away games with Maceo and the team, and “on the way home from a trip to Hershey, Pa., I made a powerpoint presentation to show my parents,” said Crosby.

Crosby was working toward her master’s degree at the time, so her parents were puzzled.

“My dad pointed out that I had never even supervised anyone,” she said, nonetheless run a men’s basketball team.

“I don’t have an answer to any of your questions,” she responded to her father, “but this is what I want to do.”

“I read through the owners’ manual three times that summer, and got the phone number for the commissioner of the (Premier Basketball) league,” she said. “My mom and I ended up going to Rochester (N.Y.) for the (league’s) national championship tournament. I talked to the owner of the Lake Michigan Admirals for five hours, and he shared everything.”

“My vision was that I could bring in this group of guys that could support my student body (and vice-versa),” she said.

“For as long as I can remember, my goal in life has always been to have a positive impact in the lives of others. I wasn’t sure what I would end up doing, but I’ve always known I like helping people. I’ve worked as a residence director for the past four years, and I absolutely love the mentoring and guidance I am able to provide for students. I enjoy my work with students, yet I’ve found myself looking for more. Beginning in 2013, the head men’s basketball coach allowed me to volunteer my time to help out his team. Tutoring the players and helping the basketball team brought a new sense of fulfillment, and in doing so, I hadn’t realized how much I had missed being involved with basketball.”

“… Maybe owning a team in the PBL will be my next step in life,” she thought. “I loved working as a residence director at Jamestown Community College, yet, the past few years I had been feeling like I needed something more. I longed for an opportunity to influence more lives, to reach more people. So I sat there that day, in August 2014, thinking, someday, three or four years down the road, I could be interested in owning my own basketball team.”

“Ambitious? Crazy? Too much? In over my head? Those are many of the comments I’ve been hearing from various people I share my plans with,” Crosby said. “To be completely honest, I agree. A twenty-five-year-old (at the time) residence director at Jamestown Community College, born and raised in Russell, Pennsylvania — what qualifications do I have to take this on? What makes me think I will be able to handle owning a professional minor league basketball team? How will I be able to continue my full-time job while also starting a brand new team? How will I have the time? How will I have the finances to sustain a professional team, not just this season, but for years to come? Donations, sponsorships? Individuals taking a risk on something never been done before in Jamestown, N.Y. What gives me the right to ask individuals to even support my vision?”

Crosby said her parents were correct in every question. “Providing meals (to players), housing…I didn’t realize how difficult it was going to be,” she said. “I felt unqualified.”

With generous sponsors, and a generous family and support system, the Jamestown Jackals are in their fourth season. And the sky is the limit.

Crosby started a non-profit corporation called #IntegrityFirst, essentially the ownership of the Jamestown Jackals, and, in their fourth season, the Jackals joined The Basketball League for the 2019 season. They are coming off their best season on the court where they won the North East Division of the North American Basketball League (NABL) and made it to the championship game in Dallas, Texas, of the semi-pro league.

The Basketball League is professional in that all players on all teams are paid a fair wage, all teams play the same number of games, and minimum standards are maintained; for ownership finances, venue size, live-streaming, stats, social media, and community service. The 32-game season began in early January and runs until early May with 16 home games for all teams.

“I believe we have accomplished much if not all that we set out to do of impacting young lives through sport and providing opportunities for young men to continue their passion of playing basketball. We use as a motto ‘stop surviving, start thriving,’ and part of our commitment to our players is to help them dream a bigger dream and then fulfill it. By joining the TBL we are confident that we will bring a high level of basketball to our community, increase the chances of our players to secure even greater opportunities around the world, provide a bigger footprint for our #IntegrityFirst message to be heard, and ultimately impact more lives,” said Crosby, #IntegrityFirst, Inc. President, and Jamestown Jackals owner.

While you could say this woman is going places, she is now literally going places. With The Basketball League comes a lot more travel, and a lot more headaches with salaries for players.

“We’ve been extremely blessed by different individuals, churches, groups, businesses,” said Crosby, who estimates it takes upwards of $50,000 a season for the Jackals in The Basketball League. “I didn’t ever plan on doing this, but I’m so passionate about this. It’s been transformational. I really feel like the biggest thing I’ve gained is confidence, to know that these different ideas I have are valid.”

Oh, and by the way, her family has bought in. Her father is the team’s assistant coach, her mom is involved with ticket sales and is on the board of directors, her brother-in-law sells 50/50 tickets, her aunt is the team nurse, and her grandparents attend every game.

And Crosby loves both her titles. She said it always makes her feel good when Eileen Goodling, Vice President of Student Development at JCC, introduces her as director of campus life AND owner of the Jamestown Jackals.

While Crosby would love for a donor to write a blank check for $100,000, the fact that isn’t happening hasn’t stopped her from dreaming even bigger.

“One game, I had 86 volunteers,” she said. “I would love to be able to have a fully-functional organization with paychecks for everyone, own my own stadium kind of like Family First in Erie, plus a full worship service attached to it.

“But then, there is this idea that this is the community’s team,” she said. “My biggest thing is I’ve always wanted to impact lives.”

She says there are 27 NBA G League (formerly D League) franchises or minor league affiliates of the 30 NBA professional teams. Why not make that “30 for 30?” The Erie Bayhawks are the closest NBA G League team to the Jamestown/Warren area.

“One thing I’ll never do, I’ll never doubt anything she says she’s going to do,” said Wofford. “Watching her from day one to now, she’s come so far as far as her personality goes, not being afraid to take charge. You don’t find people with that kind of heart. There are things you don’t think are possible, and in her mind, she thinks she can do it.”

When the Jackals were playing in Texas last year for the North American Basketball League championship against the Dallas Mustangs, Wofford noticed an entire family in the stands wearing Jackals shirts.

Facebook photos Kayla Crosby with members of the Jamestown Jackals.

“They came here from Sugar Grove or Warren,” said Wofford. “They made a two-day trip to support us. Of course, I’m not going to doubt Kayla. Whatever she has in her heart, it’s ordained by God, she’s speaking through the Lord. She says this is what’s going to happen and, bam, it happens. She’s a different kind of breed.”