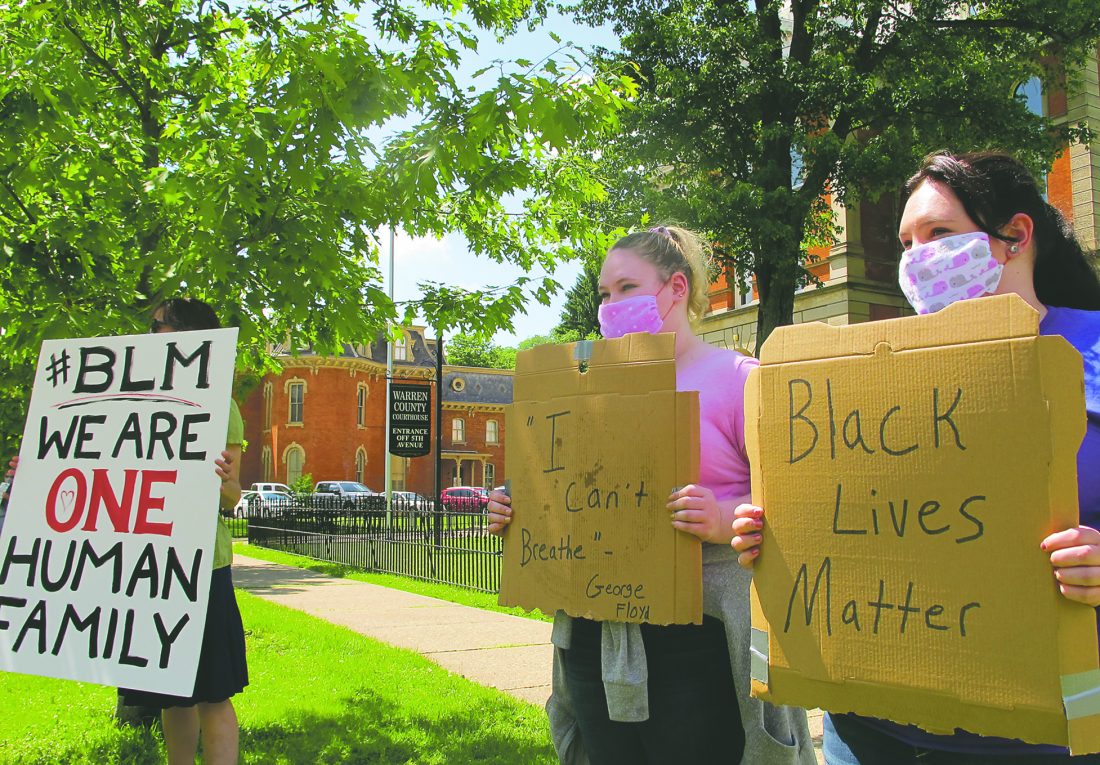 Times Observer photo by Brian Ferry From left Ellen Paquette, Olivia Shaffer, and Chloe Shaffer, protest racism and police brutality Friday outside of Warren County Courthouse on Friday. About 15 protesters were present at 3 p.m. The group numbered more than 20 at its peak, according to organizers.

A group of protesters gathered at the Warren County Courthouse on Friday to protest inequality, injustice, racism and police brutality, in the wake of the death of George Floyd.

Floyd died on May 25, handcuffed, lying face-down in a Minneapolis street as police officer Derek Chauvin knelt with a knee on Floyd’s neck for almost nine minutes.

Protests have erupted nationwide in response.

On Friday, a group of concerned citizen activists, including, but not limited to Warren Indivisible members, gathered at the courthouse to make their feelings known.

They cheered. They carried signs.

“We’re here because the way that man died was absolutely awful,” Brianna Powers of Warren said. “For the first time, I saw someone being murdered on the national news. Worse, I had to explain it to my nine-year-old son.”

She had to act.

When Indivisible heard of it, they asked to be included.

“We’re here because black lives matter,” Sally Eaton of Indivisible said. “People are becoming aware of an issue that’s been around for a long time,” she said. “It’s gotten to the point where it’s outrageous.”

“To put a knee on a man’s neck for 8.5 minutes when he was not resisting arrest…” Eaton said.

“A lot more people are realizing they have to get out and say something.”

Many of the signs referred to “Black Lives Matter.”

“BlackLivesMatter was founded in 2013 in response to the acquittal of Trayvon Martin’s murderer,” according to information on the Black Lives Matter website. “Black Lives Matter Foundation, Inc is a global organization in the US, UK, and Canada, whose mission is to eradicate white supremacy and build local power to intervene in violence inflicted on Black communities by the state and vigilantes.”

One of the signs read, ‘End White Complacency.’

The organizers were hoping to find support and raise awareness, not make trouble.

Eaton said they had contacted both City of Warren Police and the Warren County Sheriff’s Office to make them aware of the protest. “Everybody here is very sincere and very peaceful,” she said.

It was a peaceful assembly, but not necessarily a quiet one.

Passersby honked their horns in support every few moments.

The protest was not against police in general or any local entity.

“Obviously, I support the police,” Powers said. “I have friends on the force.”

“Cops like these” in Minneapolis “are giving my friends a bad name,” she said. “Officers like these need to be punished to the fullest extent of the law.”