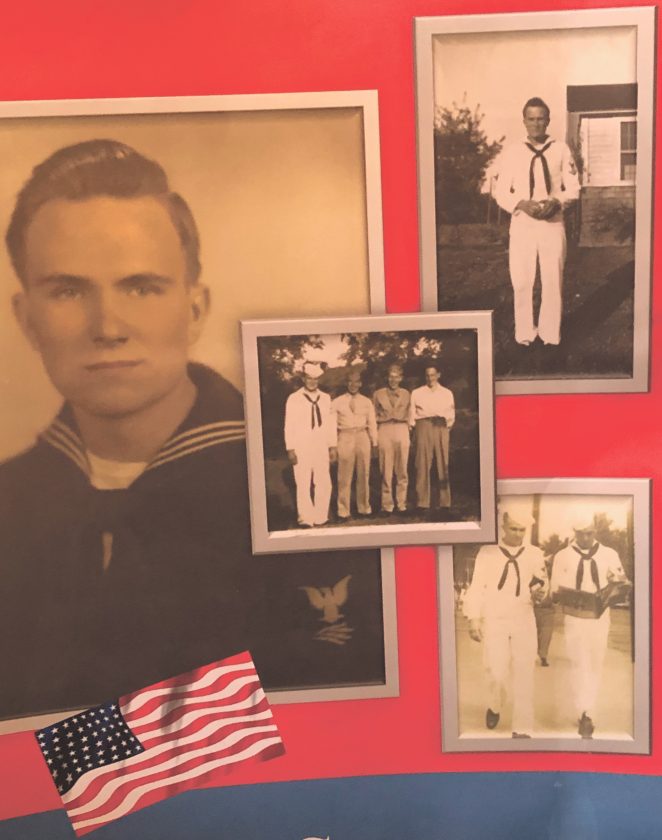 Kenneth Sorensen was born on September 4, 1925, making him 94-years-old today.

He was the oldest of 8 siblings, 5 boys 3 girls, growing up on Cobham Park Road, Scandia. All of his siblings are still alive except one sister.

Ken and his wife of over 60 years had three children together, three boys and one girl, all still alive.

His wife passed a while ago and Ken said they were married “not long enough.”

He served his time as a radioman on the USS Clarence K. Bronson, a destroyer.

“Boy was that ever a wild ride,” said Ken.

Destroyers are small, fast boats that circle the main fleet, keeping torpedos and Kamikaze soldiers away. They were nicknamed “tin cans” for the way they unstably bobbed up and down in the ocean much like a tin can.

“I didn’t feel very good the whole trip, got seasick every day,” said Ken. “Didn’t matter whether or not you were seasick though, you stood your watch with a bucket and the captain would tell you ‘you’ll get over it.'”

“He did when he got off [the ship,]” joked Ken’s son, Doug Sorensen.

Ken served directly under Admiral Frank Lowe who was in charge of the entire task force that Ken was a part of. Lowe’s rank was higher in the Navy, but Ken was to go wherever Lowe went.

“Apparently I was good at something because he took the top guys wherever he went. Must have been code ’cause I wasn’t good at anything else,” laughed Ken.

Ken spent a lot of his time on the Bronson decoding millions of Morse Code messages that came through. Some were important, some meant nothing, but all had to be decoded.

“Why can I remember the Morse,” asked Ken.

“I always say ‘why can you still talk,'” said Doug. “He did it so many times, you think about the millions of times he did it kind of gets ingrained.”

“He couldn’t shoot straight, so they took him in as a radioman,” joked Doug.

Ken both sent and received Morse Code messages during World War II, working on a schedule of on for four hours and off for four hours.

Being a radioman, Ken was pretty much in a “coop.” He wasn’t on the front lines and wasn’t allowed to know very much, but according to Ken, that’s just how they wanted it.

“The less they would know, the better in case they were captured, then they would have nothing to say,” said Doug.

Ken remembers the wake of a torpedo and attacks of Kamikaze soldiers coming at the Bronson.

“I know what a torpedo looks like going through the water,” said Ken.

When torpedos were aimed towards the fleet, destroyers such as the one Ken was on would move in zig-zag patterns in order to throw off the torpedo from its destination of destruction.

Ken also recalled the most dangerous place to be in the event of a Kamikaze attack.

“When he’s coming at you, it’s most dangerous to be up on top,” said Ken. “He’s shooting all over place, his only mission to take you down.”

“They were told from Japanese leaders that if you were killed in battle, you were immediately transported to paradise. They were more brave and more liable to come after you because they had no fear.”

The Bronson traveled all over the Pacific Ocean and even to Alaska to provide security when the threat of an attack from the Japanese came through.

One of Ken’s cousins served on the front lines as a scout in the jungle during World War II. He once told Ken a story of coming face to face with a Japanese scout.

“He said, ‘I came face to face with a Japanese soldier. I looked at him, he looked at me, and then we turned around and went our way,'” said Doug. “I think they both decided it was good to separate that day.”

While serving on the Bronson, Ken got weekend leaves at times that he could spend off of the destroyer, but had to return promptly at a certain time. One time, Ken was not so prompt.

“I would hitchhike [back and forth] and there were very few cars that would go by you and wouldn’t stop and give you a ride,” said Ken.

The time Ken was late, he decided to take the bus instead of hitchhiking and the bus was running behind schedule. When he arrived at the port, the Bronson looked to be pulling out to take off and he thought “we’re in trouble now.”

Fortunately, the destroyer had a slight delay in departure and was only pulling out to realign itself. Ken didn’t get off with no discipline, though.

The man in charge of discipline told him, “I want to impress upon you the importance of being on time,” so Ken got kitchen duty.

“The guys in the kitchen are the ones that paid the price,” joked Doug. “My mom knows why they didn’t want him. She said they didn’t teach him a thing, nothing useful.”

Apparently, they gave Ken a book and told him to “go over there and read it.”

Upon coming home from serving, Ken was “thrown back into life.”

There was not much mental help for returning soldiers back in those days. Unfortunately, Ken lost his cousin to suicide after they returned from war.

Ken began working as a contractor and in the process was introduced to the guys at Penelec.

“They told me if I ever want a job, to let them know. I told them ‘I’m letting you know,'” said Ken.

He worked there until his retirement.

“It was a good outfit, I was on call 24 hours sometimes. It’s not fun being ready to move at all times, but you get used to it and my wife could handle it,” said Ken.

His wife worked at New Process after the children were all graduated, out of the house and in college.

He and his wife bought a home with land on Scandia Road, Scandia.

“We only planned to live here for one year,” said Ken. They stayed a few more years as Ken still lives in the same home.

The pair raised their children in the home and at one time had cows, sheep and even a cucumber patch growing.

“If you want to see a bunch of different snakes, grow cucumbers,” said Ken.

Ken was recently honored on the Honor Flight.

50 men and women were honored during the flight, Ken being one of four from the Warren Area. The group traveled to Warren Area High School where all students lined the halls clapping in honor and thanks for the veterans walking through.

All of the different airports that the group traveled through, groups lined the halls clapping and encouraging them.

There were musicals honoring the group and even a men’s chorus in the airport in Buffalo, NY.

Ken received a special poster with images of him during wartime, he was given a handmade blanket with Navy-related fabric and the Warren Area High School shop made him a metal plaque with his rank and information on it.

“It was a pretty special time, the Honor Flight is really incredible what they do,” said Doug.