Larson went from living dangerously to being drafted 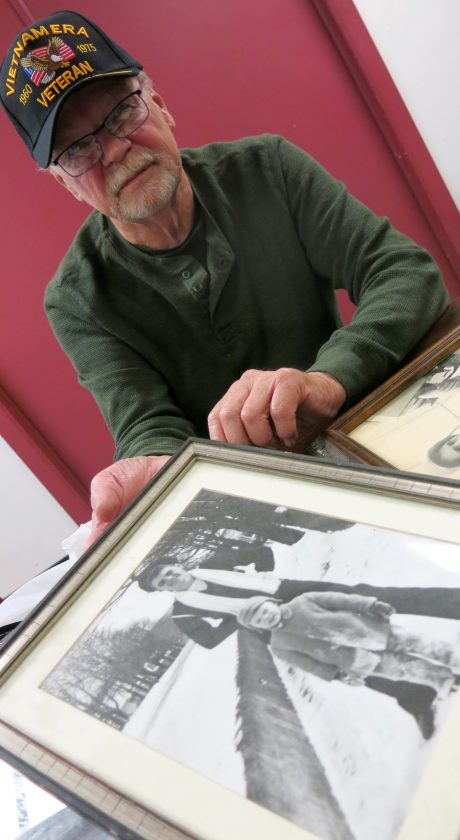 Times Observer photo by Brian Ferry U.S. Army Veteran Bob Larson holds a framed photo of him at age 4 with his older brother, Vern, known as Burn, wearing his U.S. Navy uniform. “I can remember him telling me to stand at attention,” Larson said.

But, since his head had been in the wrong place to begin with, upside-down was just what he needed.

Larson was 22 when he received his draft notice.

He had dropped out of high school after nearly completing 11th grade. And he was living dangerously. 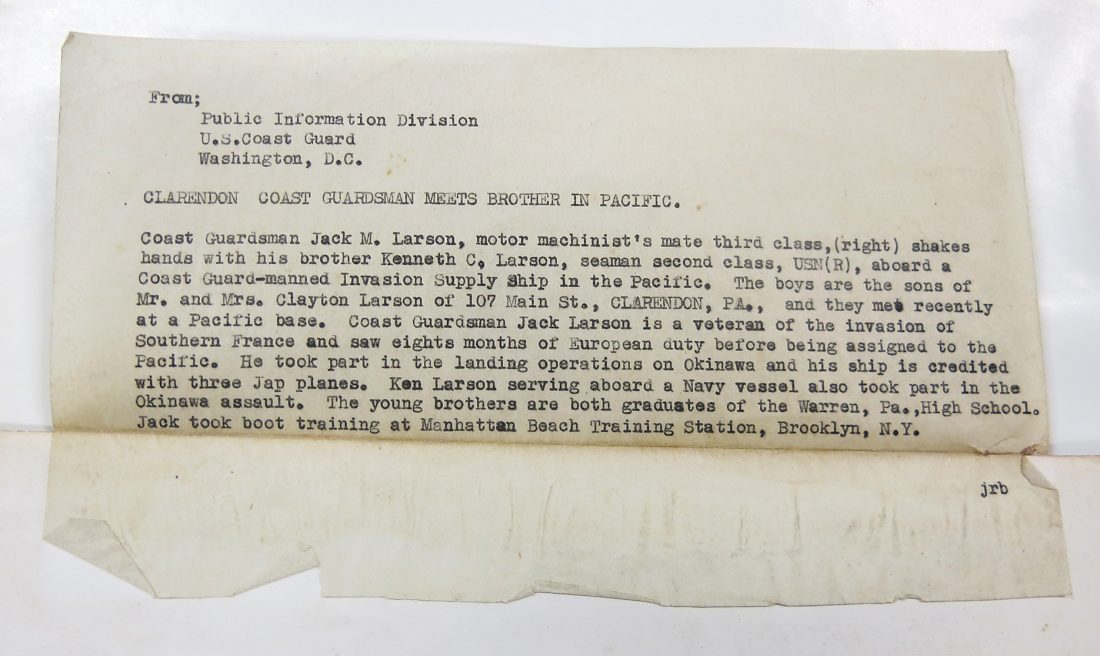 Times Observer photo by Brian Ferry The original press release regarding the meeting of Bob Larson’s two older brothers on the Pacific Ocean during World War II that was sent from the Coast Guard Public Information Division to Warren for publication.

It was a regular event.

“We were driving home drunk every Friday and Saturday night,” he said. “Sooner or later, something drastic was going to happen.”

It did. The drastic thing was the draft.

“Uncle Sam grabbed me by the nape of the neck, put me at attention, and said, ‘You’re not going to do that anymore.'” 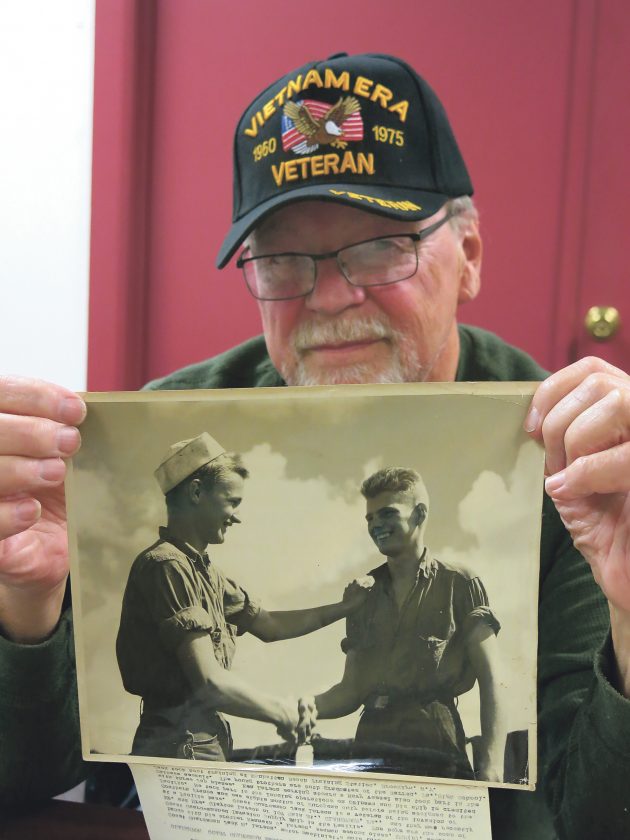 He and a handful of other young men from Warren showed up at the assigned time on Jan. 22, 1964, at the train station near Struthers Wells. Most of them took the train to Fort Cumberland with frequent stops along the way to pick up more men.

“I knew I was going to have to serve two years,” Larson said.

There were recruiters from the National Guard at the station. “If you sign today, you don’t have to go,” they told him.

It sounded good. He turned it down. Their offer was a four-year deal.

At Fort Cumberland, the new soldiers were tested.

He did well on the GT test and took the OCT.

“That was tough,” Larson said. “I remember saying, ‘That was the toughest test I’ve ever taken.'”

“I thought I flunked that sucker,” he said. “In reality, I passed it well.”

Larson could have gotten his GED while serving, and then entered OCS.

That was a much longer term — 20 years between active duty and reserves. In all likelihood, he also would have been sent to Vietnam as a lieutenant.

The army didn’t forget he had passed. “They got us together every so often and twisted our arms a little,” he said.

He went on to basic training at Fort Jackson, S.C., with 800 other men arriving the same day.

In January, it wasn’t so bad. “When you got into March, it was pretty hot down there,” he said.

One March day, it started raining. “We got soaked,” he said. “They told us to put our ponchos on. Then it stopped raining.”

Now wet, under plastic, boiling in the sun, the men were “double-timing it.”

“Guys were dropping like crazy,” Larson said. “But I made it.”

That was a point of pride for Larson and he went through two years without the military equivalent of a sick day.

From Fort Jackson, Larson was shipped to Fort Campbell, Ken., where he became part of the 11th Artillery.

“We were told the 11th Artillery got its name because it was designated to fire the last ceremonial shot at the end of the First World War,” he said. “The war had ended. It was a ceremonial shot to signify that we won.”

He was an E-3 — private first class. “Almost nobody in our outfit got promoted in two years,” he said.

But, he held down a job normally given to an E-6 — staff sergeant.

Without the stripes, Larson was the training NCO (non-commissioned officer) and was in fire direction control (FDC).

“When we went in the field, I was in FDC,” he said. “In the field, there were guys out on the guns — we called them gun bunnies. Behind them, in tents, was fire direction control.”

The forward observer — as far as 11 miles away overlooking the enemy — would call in a location to be bombarded.

FDC determined the necessary angles to put shells in that position.

“The objective was to bombard the target with the full load,” Larson said. One of the six 155mm howitzers in the group would fire “one over, one under, one on.”

The forward observer would let FDC know how the over, under, and on looked.

FDC would make any necessary adjustments. “Then, you would do the full load” with all six howitzers, Larson said.

In the office, Larson assigned soldiers to classes. There were classes every day. Having more than one filled up one’s time very quickly.

He wasn’t a sergeant, but the position came with some perks.

“You didn’t pick on Bob Larson, because then you got a bunch of classes,” he said.

Larson had been making more than half again that working at Dorcon before he was drafted.

Serving in Fort Campbell had another advantage.

“We were 60 miles from Nashville,” he said. “I had it made. Every weekend… into Nashville. The Grand Ole Opry was loaded with beautiful ladies.”

He met one and fell in love. But, their paths led them in different ways.

Larson did not end up on a path to war.

Larson was not shipped overseas. Not because he had any control over it. “If they had told me to go, I would have gone,” he said.

And not because of promises from President Lyndon Johnson.

In 1964, Johnson said, “We are not about to send American boys nine or ten thousand miles away from home to do what Asian boys ought to be doing for themselves.”

“Johnson was saying, ‘No more boys,” Larson said. “We knew he was lying because he kept sending them.”

No, Larson narrowly avoided shipping out based on his draft date. “End time service… if you had more, you went,” he said. “I missed it by a couple weeks.”

“I got my GED in the army,” he said. “When I got out of the service, I used the GI Bill to go to college. Not only did Uncle Sam put me at attention and change my life, he sent me to college.” After a year in college, Larson even took his transcript to his high school principal. Satisfied that Larson had earned t

Times Observer photo by Brian Ferry The original press release regarding the meeting of Bob Larson’s two older brothers on the Pacific Ocean during World War II that was sent from the Coast Guard Public Information Division to Warren for publication.

Times Observer photo by Brian Ferry U.S. Army Veteran Bob Larson holds a framed photo of him at age 4 with his older brother, Vern, known as Burn, wearing his U.S. Navy uniform. “I can remember him telling me to stand at attention,” Larson said.

he English credit that was the only thing holding him back from a diploma, the principal went and got one.

“As far as me, the army was a life-changing experience,” Larson said. “Something else the Army did for me was to make me understand that I could handle heavy mental and physical challenges and I handled those. It gave me some strength in my life. I don’t want to compare to those that did combat. My tenure was in peacetime. (It’s) still a mental and physical challenge you don’t get in civilian life and that was good for me.”

And his time in the service continues to be an asset to him through the services of the VA.

“They have been a very wonderful asset in my life and the one in Warren is really great,” he said. “They really need some credit for the great job they’re doing.”

The youngest of four brothers to serve:

Bob Larson was the youngest of four brothers who served in the U.S. Armed Forces.

His brother Jack entered the Coast Guard and served during World War II.

“He was involved in the invasion of Normandy,” Bob said. After that, he was shipped to the Pacific Theater.

Ken Larson — one year younger than Jack — enlisted in the U.S. Navy.

They were in the Pacific at the same time.

That’s no surprise. There were thousands of ships in the millions of square miles of the Pacific.

The surprise was that the two ships got within sight of one another.

“Their ships crossed paths in the Pacific,” Bob Larson said.

When one brother saw what he believed to be his brother’s ship, he told his commanding officer.

“The officer let Ken come aboard Jack’s ship to shake hands for a photo,” Bob said.

The Coast Guard’s Public Information Division sent that photo with a press release about that encounter to Warren for publication.

Coast Guardsman Jack M. Larson, motor machinist’s mate third class (right) shakes hands with his brother Kenneth C. Larson, seaman second class, USN (R), aboard a Coast Guard-manned Invasion Supply Ship in the Pacific. The boys are the sons of Mr. and Mrs. Clayton Larson of 107 Main St., Clarendon, PA., and they met recently at a Pacific base. Coast Guardsman Jack Larson is a veteran of the invasion of Southern France and saw eight months of European duty before being assigned to the Pacific. He took part in the landing operations on Okinawa and his ship is credited with three Jap planes. Ken Larson serving aboard a Navy vessel also took part in the Okinawa assault. The young brothers are both graduates of Warren, Pa., High School. Jack took boot training at Manhattan Beach Training Station, Brooklyn, N.Y.

That was a happy occasion, but there were fears in the Larson family, especially toward the end of the war.

“The Japanese were fierce opponents in combat,” Larson said. “We didn’t know anything about the atomic bomb. They were talking about invading Japan.”

Casualty estimates for that invasion climbed as high as one million Americans.

The two Larsons who enlisted in the mid-1940s might not have known that number, but they knew not everyone would make it home.

“They had to have that in their minds,” he said.

“The war was over when he joined,” Bob Larson said.

Nuclear weapons were an important part of his service, too.

“He was on the ships that were observing the tests of the atomic bombs.”