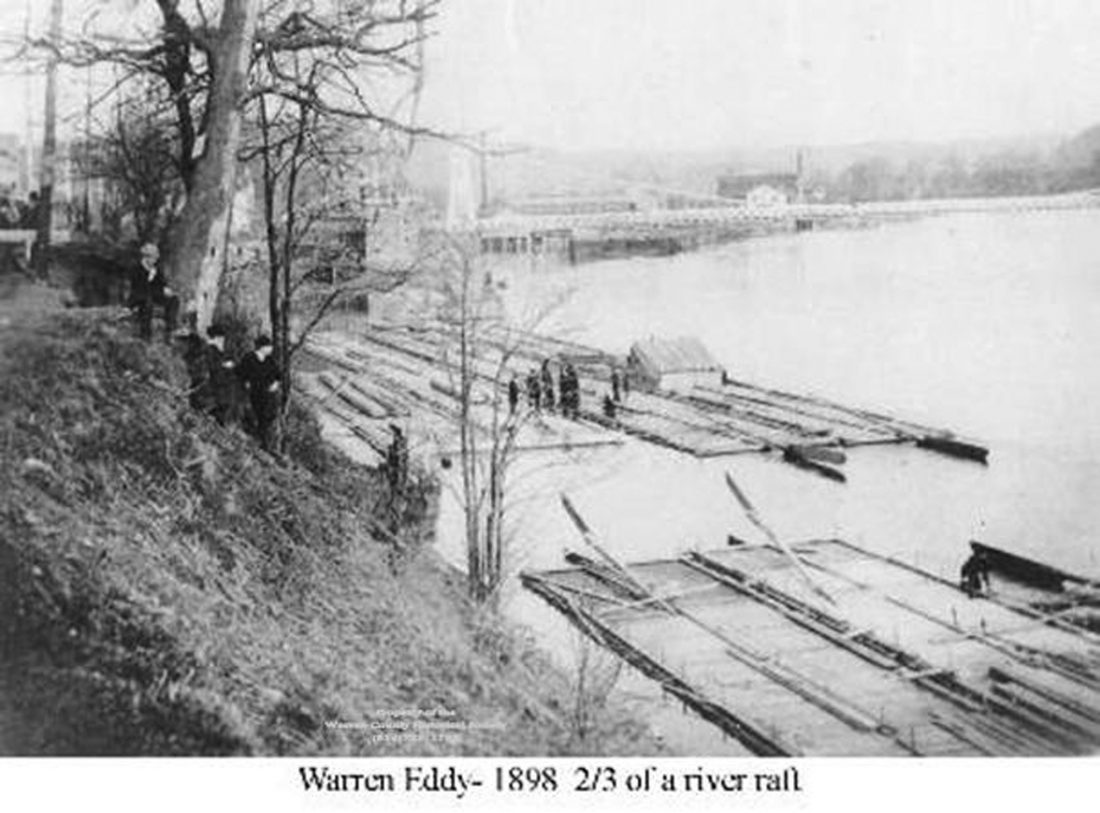 Photo courtesy of Warren County Historical Society Lumber rafts were built to provide a means of transportation to sell excess lumber cleared from the land. The property is now known as Wardwell’s was initially owned by Jacob Hook, who was charged and later acquitted in the slaying of a sheriff’s deputy. The land on which Hook lived was the site of one of the largest sawmills on the Allegheny River in the early 1800s. The property now known as Wardwell’s.

Some of these place names are places we know.

Some of these place names are places we don’t.

I suspect for most of us that Wardwell is one of the latter.

And it links to the county’s first alleged murder case.

Wardwell is described as “a small group of houses four miles north of warren along the east bank of the Allegheny River, Route 59 in Mead Township.

The hamlet was named for Joseph M. Wardwell, “the original settler, who came from Rhode Island,” according to a 1960s Warren County place names article.

And for a bit of a bizarre twist…

“He died in 1900 and left an unusual will:his lands went to the First Congregational Church, Bristol, Rhode Island; he established an endowment fund for the church with the provision that the income should, in part, be used to pay for gas for illuminating the church Sunday nights inasmuch as he had earlier provided the lighting fixtures; income should also be used for pew rent for his pew which he turned over for the use of his nephews and nieces;and, finally,income should be used to construct a high spire on the church in which the chimes, which he had also previously given, could be hung.”

A ferry once operated across the river at that location for many years.

Now for the link back to the first alleged murder in the county.

The property was initially owned by Jacob Hook, who was charged with murder in the slaying of a sheriff’s deputy that had been sent to arrest Hook on questionable charges.

Schenck’s History of Warren County concludes that Hook “owned all the land along the creek, including the entire site of Glade City, before 1816, though he lived at his saw-mill across the river in Mead.

So the alleged murder – of which Hook was acquitted – may have occurred on the land that would come to be known as Wardwell.

“This mill, which had five saws, was one of the largest mills on the Allegheny River at that day. In 1819 he built the large barn now standing on the farm of Guy C. Irvine. He died at Pittsburgh in 1827, while there on business. At that time he was one of the most extensive of the lumbermen in the entire State. He owned also a quarter interest in the old Pittsburgh bridge….The family came from New Hampshire. He was a bachelor, and at the time of his death was in the prime of life.

“The property is now known as Wardwell’s,” Schenck concluded, “and it is the center of quite an oil field” in the 1880s.