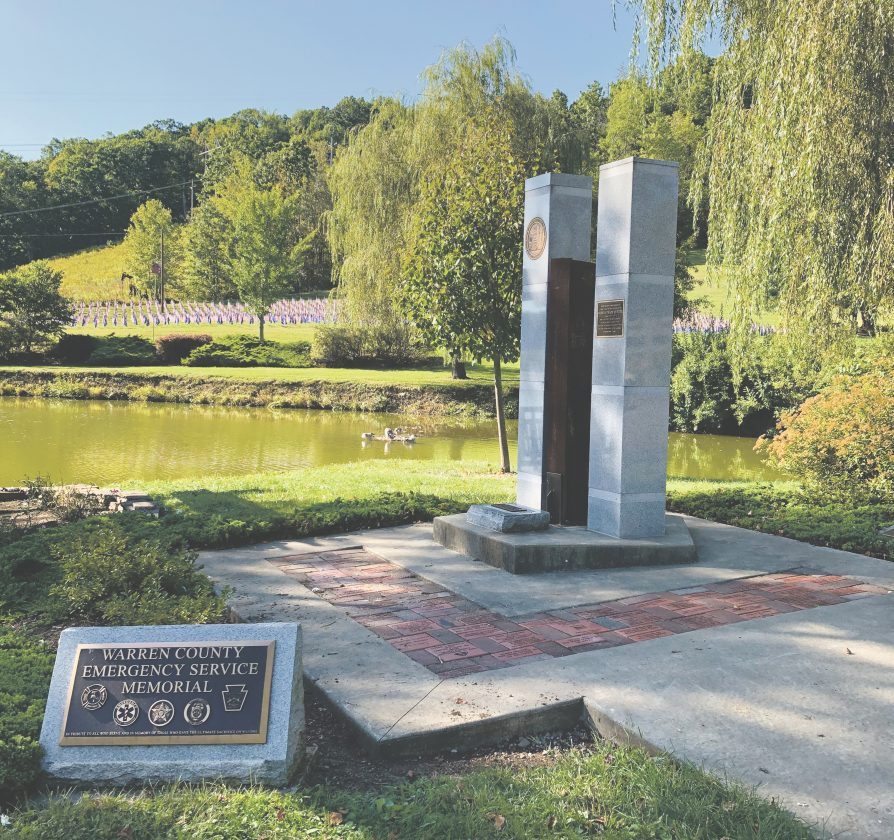 Times Observer Photo by Katie Miktuk The Warren County Emergency Service Memorial, minus the flags, with the field of 3,300 flags honoring the fallen in the background, located in the Warren County Memorial Park.

The Warren County Memorial Park will be holding a 9/11 memorial service Wednesday, September 11, at 5:30 p.m.

The cemetery began the memorial service on September 11, 2006, the fifth anniversary of the tragedy.

Ruth Seebeck, co-manager with her husband Ed Seebeck of the cemetery, had seen a flag field elsewhere and wanted to do something to that tone in Warren County.

On the 10th anniversary, the Warren County Emergency Service Memorial had been erected and dedicated. The memorial contains a piece of metal from the rubble of 9/11 as well as an American flag and the five different emergency services flags.

The piece of metal from the rubble is courtesy of the hard work of the Starbrick Volunteer Fire Department. The memorial itself was paid for through brick purchases and donations.

“September 11, for anyone old enough to remember it, will never forget. Something like that just never leaves your imagination,” said Ruth.

“We wanted to pay tribute to that day in remembrance. Like most things in life, we forget and we don’t really pay attention to history and I wanted to keep that alive.”

Along with those fallen in 9/11, local responders are also acknowledged and thanked during the service.

“It’s important to say thank you to local heroes and those who get out of bed at 3 a.m. for fire or EMS or leave the Christmas dinner table and their families and friends to go take care of someone else’s family and friends,” said Ruth.

According to Ruth, the memorial service is the largest in Western Pa. and possibly the entire state, other than the one held in Shanksville, Pa., where Flight 93 crashed.

“Our first memorial gathered over 1,000 people,” said Ruth. “We even bring in people from outside of Warren County.”

The Iron Horse Cowboys, a bike riding group who formed after 9/11 and whose first ride was a tribute ride to NYC, stumbled upon the memorial park by accident in 2009 and have attended the memorial service ever since.

The group has members from places such as Michigan, California, New Jersey, Ohio and New York.

The ceremony will begin at 5:30 p.m. and will last approximately an hour and a half.

There will be bleachers and chairs for those attending the ceremony to sit on.

“It takes about 20 people just to set everything up,” said Ruth.

Honorary Junior firefighters and Explorer Posts will be honored during the service as well.

“Teens are the future for both EMS, fire services and military. It’s important to encourage and honor them for getting involved at a young age,” said Ruth.

A candle lighting will be held in memory for fallen officers.

Parking will be in the top field and attendees will be shuttled down to the ceremony site.

Cocoa, coffee and cookies will be served following the ceremony.