How Chapman got its name 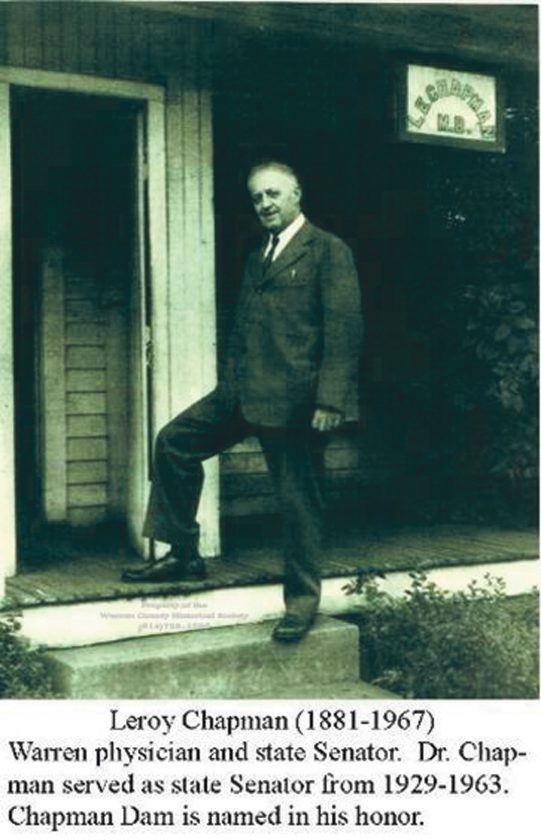 Photo courtesy of warrenhistory.org Pictured is Dr. Leroy E. Chapman (1881-1967), of Warren. Chapman was active in community organization and held the position of state senator from 1931 to 1962. He introduced the bill that led to the creation of the park named in his honor — Chapman Dam State Park.

Photo courtesy of warrenhistory.org Pictured is Dr. Leroy E. Chapman (1881-1967), of Warren. Chapman was active in community organization and held the position of state senator from 1931 to 1962. He introduced the bill that led to the creation of the park named in his honor — Chapman Dam State Park.

In the 1989 film “Field of Dreams,” a farmer repeatedly hears voices that say, “if you build it, they will come.” The farmer’s project is a baseball field that attracts ghosts of baseball legends.

One might imagine a similar voice speaking to the late Dr. Leroy E. Chapman. Chapman’s project led to another form of recreation that has attracted people for nearly 70 years.

Chapman Dam State Park is located on the West Branch of Tionesta Creek, five miles west of Clarendon and Route 6.

Chapman was elected state senator in 1929 and held the position until 1963. He introduced the bill that led to the creation of the park. The park was named in his honor. In 1950, the late Clare Berger (Warren newspaper editor) suggested that the new state park be named after Dr. Chapman.

Chapman was born in Warren on July 3, 1881. He was Warren County coroner from 1912 to 1922 and served as burgess of Warren from 1922 to 1930 (mayor for two terms). He was a trustee of Warren Hospital and a member of the American Medical Association. He died in 1967 and is buried in Oakland Cemetery. 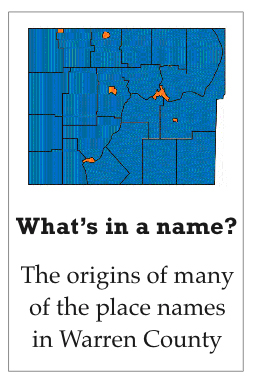 Many community groups were instrumental in creating the park. The first land for the park was acquired during 1949. Chapman Dam State Park opened in 1951. Camping facilities were built and opened in 1956. The beach opened in 1958. The same year, the “Dam” was dropped from the name and it officially became Chapman State Park.

Prior to becoming Chapman State Park, the area was known as Bucher’s Mill. In 1869 Jacob Knoph built a water-powered mill that could saw up to 4,000 board feet on a good day. Knoph sold the mill to Philip Bucher in 1866. This mill sawed mostly pine boards. The property passed through several owners and by the early 1940s was owned by a private hunting and fishing club.

Chapman State Park is open for year-round recreation. The lake attracts swimmers, fishermen, and boaters of either the electric or non-powered variety. Gas-powered boats are prohibited on Chapman Lake.

There is a large picnic area near the beach that overlooks the lake. The beach opens for the summer on Memorial Day and closes Labor Day weekend. There is a concession stand near the beach.

The park provides an ideal setting for picnicking and gatherings. Five pavilions are available by reservation or first-come, first-served. If grilled fish is on the picnic menu, the lake provides a variety.

If you over-indulge in the picnic food, you can walk it off for miles and miles.

Chapman State Park is a trailhead for an extensive network of trails. Twelve miles of trails are open to hiking.

Hikers are encouraged to take a map and compass.

Visitors to the park have several choices should they choose to make their visit an overnight stay.

The wooded campground has 83 campsites, with two shower houses and water hydrants. Many campsites offer electric service. Approximately half the sites are pet-friendly.

Three cottages are available to rent. The cottages sleep up to five people in single and double bunks. The cottages also have a picnic table and a fire ring in the yard area.

In addition to traditional cottages, two Mongolian-style yurts are available to rent. These round structures are mounted on a wooden platform and have a cooking stove, refrigerator, tables, chairs, countertop, electric lights, heat, and outlets. Picnic tables and fire rings are in the yard area.

The park stays open in the winter for cross-country skiing, snowmobiling and ice fishing.

A dam rehabilitation project started in Sept. 2017 is nearly complete, according to Park Manager Tyson Martin. Access to the lake for boating was approved on Saturday. Swimming and fishing are still prohibited.