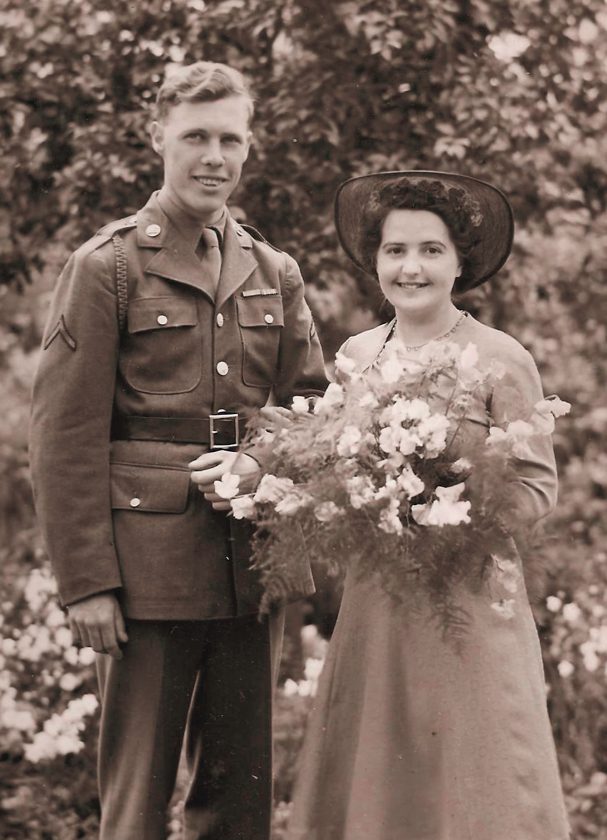 Photo courtesy of John Ferry Lloyd and Joan Ferry were married in England on June 23, 1943. Originally from Lander, Lloyd was a cannoneer in the 29th Division which was stationed overseas prior to the invasion of Normandy. Joan was six months pregnant with John Ferry on June 6, 1944. Joan and Lloyd reunited in the U.S. in March 1946 and settled down in Lander to raise their family.

My most significant D-Day story has nothing to do with battles, or strategy or tactics.

I was born in England on Sept. 14, 1944, three months after D-Day. If you do the math, my mother, Joan, was six months pregnant with me while staying with her parents in Rushden, England while my father, Lloyd, had a front-row seat for the invasion of Normandy. He was a cannoneer in the 29th Division, which assaulted the western half of Omaha Beach.

My parents had been expecting their “Longest Day” for a year, but up until then, the 29th had stayed in England, training for the inevitable.

My mother was no stranger to tragic loss. Her big brother, David Cutmore, had been mortally injured in a motorcycle accident ten years before. He’d lingered in a coma for a while and showed signs of recovering but, in spite of their prayers, he died. A 16-year-old girl had lost her idol.

Five years later, Harold, her fiance and the first love of her life, had perished when the Germans had sunk his aircraft carrier the day before her 22d birthday. 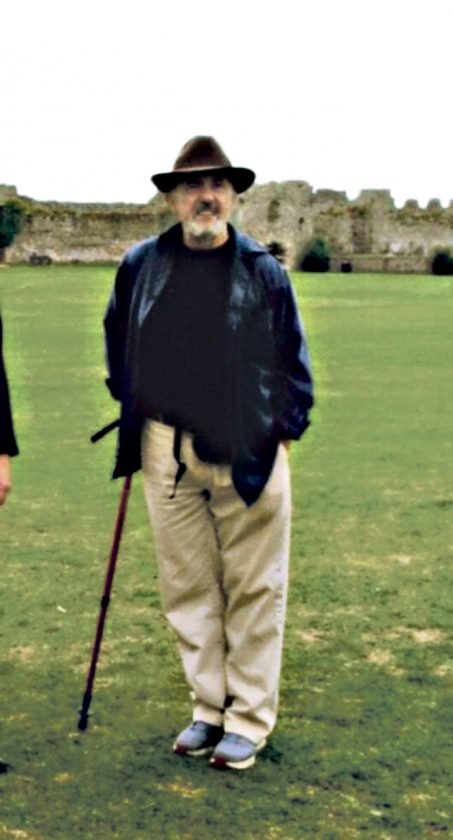 So she knew how easy it could be: One minute he’s there, the next minute – gone; but it was days later that it was obvious he was not on the list of survivors. Mother didn’t find much use for prayer after that.

The Germans had a propaganda guy, a radio personality named William Joyce, who opened his nightly broadcast in a stilted British accent, “Germany calling, Germany calling…” The shortwave version of his broadcast reached all the way to the states.

His nickname was Lord Haw Haw, and he was born in Brooklyn, New York, but was a British citizen.

At first, there was little official news on the invasion – Had they landed? Had they won? How bad were the casualties?

Imagine the desperation in England, and in the little house at 107 Hayway, Rushden, Northamptonshire, as my mother and her parents waited, my grandfather, twisting the dials on the radio set, looking for a word of news.

There was Lord Haw Haw’s voice crackling into the room. My grandfather, bless his heart, was in the spirit on the Normandy beaches along with 50,000 of his fellow Brits and Canadians, and 50,000 Yanks, one of whom happened to be his son-in-law. He leaned in, parsing Haw Haw’s words for bits of truth, forgetting for a moment the very personal stake that his daughter had in the fate of the invasion.

I paraphrase Lord Haw Haw: “Yes they’d landed, but we have killed them all, their bodies rolling in the red surf of the English Channel. The boys of the 29th Division did not have a chance against the elite machine gunners of the Wehrmacht. Dead! They’re all dead! Haw-haw”

Such a cry of anguish and pain from deep within my mother as she swooned on the sofa. “Oh no, oh no,” she cried.

And my grandmother shouted, “Will you turn that damned thing OFF!”

So there’s your fake news, 1944-style. Eventually, that day more balanced accounts came to them. It was bad enough, but by the bitter end of June 6th, the allies had a firm foothold and would go on to victory

Dad survived, going on to fight until war’s end, and we joined him in the U.S. in March 1946, two months after the hanging of William Joyce, for treason, not to mention for making my mom cry.

Photo courtesy of John Ferry Lloyd and Joan Ferry were married in England on June 23, 1943. Originally from Lander, Lloyd was a cannoneer in the 29th Division which was stationed overseas prior to the invasion of Normandy. Joan was six months pregnant with John Ferry on June 6, 1944. Joan and Lloyd reunited in the U.S. in March 1946 and settled down in Lander to raise their family.