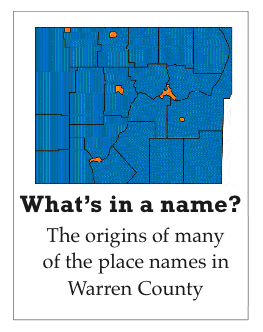 More than 100 years ago, in Southwest Township, there was a place called Wheedale.

Since about 1891, the place has been known as Selkirk.

In the 1800s, there was a sawmill there. It was owned by H.W. Martindale, originally of Bradford, and J.J. Wheelock, originally from Titusville.

The village that grew up around that mill was given a name reflecting a combination of the owner’ names — Whee and dale.

The two families were connected by more than business. According to the History of the Counties of McKean, Elk, and Forest, Pennsylvania, by Leeson, Beers, and Co., Martindale’s sister, Elsie, married J.J. Wheelock.

In the Jan. 30, 1891 edition of the Warren Ledger, J.J. Wheelock is listed as a grocer in Southwest Township.

According to Ernest C. Miller’s Place Names in Warren County, Pennsylvania, there was a Wheedale Post Office from August 1886 to December 1891.

The post office remained and continued to serve the community after the name changed to Selkirk in 1891. In 1902, that facility closed and mail was routed to Grand Valley, about three miles away.

Both Wheedale and Selkirk are place names in the British Isles.

Wheedale Gill is a river in North Yorkshire and Selkirk is a town in Scotland.

There is not an entry in Miller’s Place Names about Selkirk.

There is a modern reference, however, on www.findaspring.com to the “softly flowing seepage” known as Selkirk Spring which reportedly can be found about 1.5 miles west of Route 27 on Selkirk Road.

It is “little known and very remote, but well worth the journey,” according to findaspring.