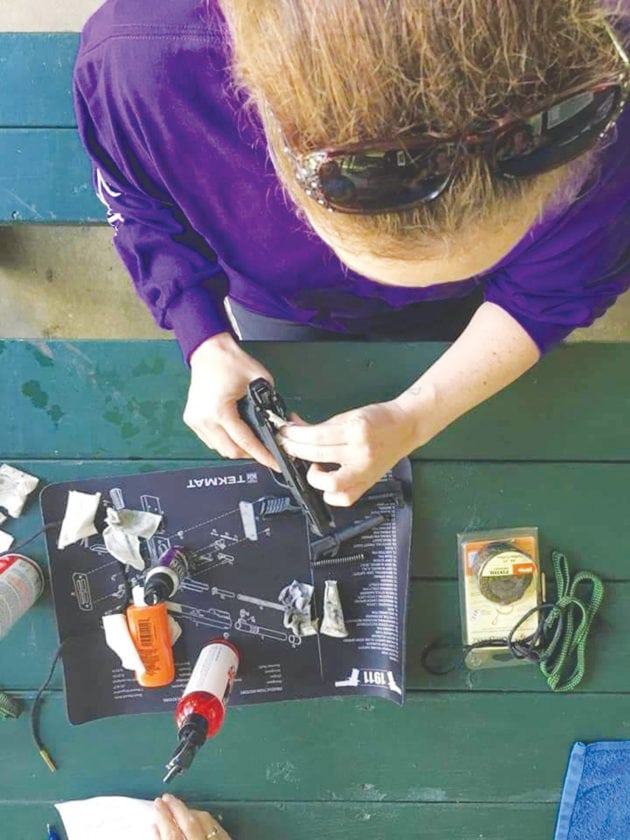 Well Armed Woman got its start in Warren thanks to the effort of Dee Barrett-Klakamp, who founded the Warren County Chapter in May of this year. Initially, the chapter was meeting the first Saturday of every month at the Sheffield Rod and Gun Club on Austin Hill Road in Sheffield.

“We were on their calendar for three months,” said Barrett-Klakamp.

Something went awry after the third month.

“I don’t know whether it was a miscommunication,” she said.

When she approached a Sheffield Rod and Gun Club representative, she explained that the Warren County WAW was looking for a place to hold its monthly meetings indefinitely.

Things went okay for the first three months, said Barrett-Klakamp, but in August, the group — whose WAW members paid dues to be members of the Sheffield Rod and Gun Club, in addition to their dues to the Well Armed Woman Shooting Chapters — arrived to find the building and even the porta-potties locked and unavailable for their use.

In September, she said they were again barred from using the building, this time because there was another program going on that day.

Barrett-Klakamp asked to be put on the agenda for the club’s next board meeting so that she could address board president Pete Johnson regarding their continued use of the club. She, and other WAW members in attendance that night, were told in no uncertain terms that their memberships were terminated effective immediately, and Johnson told her then that he “wasn’t going to discuss it,” said Barrett-Klakamp.

As to how the rest of the club’s board of directors felt about that, Barrett-Klakamp was given the impression that some didn’t agree with the decision. She said she was told that on Tuesday, Sept. 25, that following a meeting by the club’s board of directors, Johnson had been voted out as president. Dan Parsons, acting as interim president, had reached out to her letting her know that the group’s memberships were intact and that they could continue meeting there.

Parsons also indicated, said Barrett-Klakamp, that he would be attending the group’s next meeting to discuss the situation going forward.

Then, said Barrett-Klakamp, on Thursday, Sept. 27, another emergency executive meeting was held at the club, during which, she was told that Johnson was reinstated as president of the club. She said the only further communication she received was from Parsons telling her that he would not be attending the WAW meeting on Monday on the issue, which was held without representatives from the Sheffield Rod and Gun Club attending, though invited.

A direct call to Johnson on Tuesday resulted in no new information, with the person who answered the call stating that Johnson was unavailable and did not wish to have a number to call back with comment.

A direct call to Parsons was unanswered, although a message was left should he wish to comment.

An inquiry, made to the club’s direct phone line itself, was answered and a number was left for both Johnson and Parsons to contact the Times Observer if they wished to comment.

At this point, Barrett-Klakamp said on Monday, “we’re done with this.”

“We were welcomed there with open arms,” said Barrett-Klakamp, who added that Kalbfus president Mike Fadale was excited to have the group join the Kalbfus fold.

For anyone who might be interested in joining WAW of Warren County, said Barrett-Klakamp, the group is as welcoming to new members as Kalbfus has been to them.

“Our priority is safety,” said Barrett-Klakamp. “We’re all here to have fun and to learn. This is fun stuff,” she said, excited about both the conversation and the topic on which she spoke.

If someone is looking to learn not just how to shoot, but how to be a confident, competent firearm owner and user, WAW is for them, said Barrett-Klakamp. Learn more about the Warren County Chapter by searching Warren County PA The Well Armed Women on Facebook or email the chapter directly at twawwarrencounty@gmail.com.