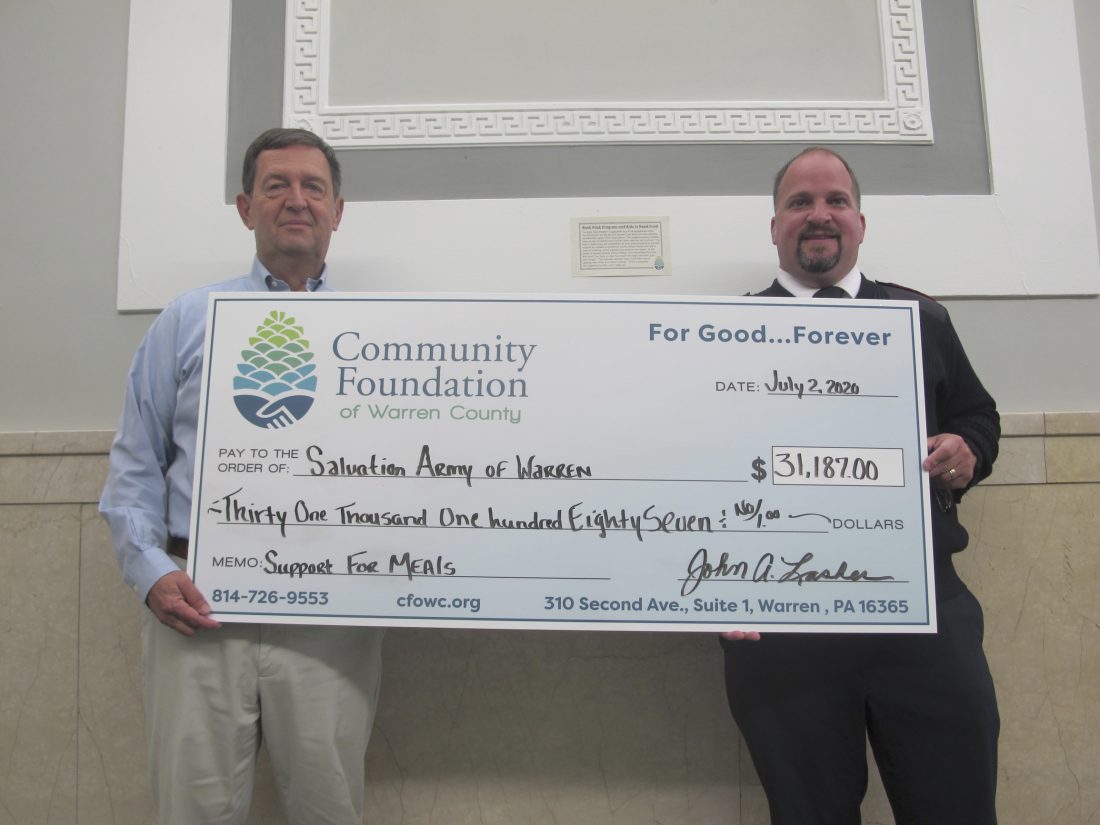 Times Observer photo by Brian Ferry Community Foundation of Warren County Executive Director John Lasher (left) and Salvation Army Capt. Keith Jache hold a check from the foundation to the Salvation Army in the amount of $31,187 to cover food costs during the past three months of the COVID-19 pandemic.

For the Salvation Army, the COVID-19 pandemic has raised some unusual challenges.

The pandemic has also shown that the Warren County community is ready and willing to come through in a crisis.

Prior to COVID-19, the Salvation Army was serving 30 to 40 meals a day, according to Capt. Keith Jache.

Economic hardships caused by the virus dramatically increased that number. “We were serving 300 meals a day at the peak,” Jache said.

In June, instead of having meals ready every day, the workload was so high at the soup kitchen that the Salvation Army served meals on Mondays, Wednesdays and Fridays, and sent home additional meals for Tuesdays and Thursdays.

During that time, having the money to buy food was not a problem.

Making sure county residents didn’t go hungry was a goal identified by the Community Foundation of Warren County, according to Executive Director John Lasher. “The Foundation became aware of the most urgent need being feeding people.”

“We contacted the Salvation Army because we knew that they were stressed,” Lasher said. “They were serving hundreds of additional meals every week. The Foundation authorized a grant to cover their food costs.”

“I’m not sure we could have done this without their help,” Jache said. “They covered almost 100 percent of our food cost. I did not have to worry how I was going to afford all this food.”

The army only had to provide the “hands and feet” to get the food to the people that needed it while the Foundation provided the dollars. “They went above and beyond,” Jache said.

This week, Lasher presented a check to Jache in the full amount of $31,187.

The community remained active in support of the Salvation Army as well.

“The care of the community was overwhelming,” Jache said. “The Sheriff’s Office did a food drive for weeks.”

Another problem Jache faced during the peak of the pandemic was the availability of food.

Some stores limited the number of items he could buy at one time. Sometimes volunteers asked what he needed and he could supplement his limited supply that way, and Warren Shurfine did not enforce the item limit rule on the Salvation Army.

“I have the money, can I get the product?” was a new question for Jache. “Every week we had to plan a menu out based on what we could get.”

The demand has dropped enough that the Salvation Army is back to a daily schedule.

The peak is over, but the need is still more than twice as high as it was before the pandemic. “We are serving 86 meals a day, now,” Jache said.