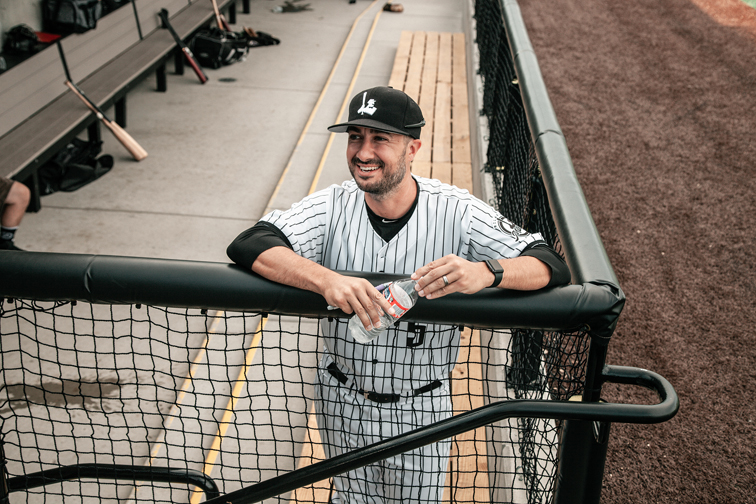 Anthony Barone could not think of a more appropriate way to describe his first four games as a professional baseball manager Wednesday afternoon.

It’s hard to argue with the Jamestown native.

His Milwaukee Milkmen lost Friday, he was ejected from his first win Saturday, COVID-19 canceled Sunday’s game and the Milkmen won in extra innings Tuesday after a late bus-ride start to the day, a rain delay, a first-pitch tying home in the bottom of the ninth inning and a game-winning single in the top of the 10th.

“So far it’s been a really easy progression to get through the first four games,” Barone said.

Milwaukee lost opening night, 2-1, to the Chicago Dogs despite getting the potential tying run to second base in the bottom of the ninth inning.

The following afternoon, the Milkmen beat Chicago, 4-3, but Barone wasn’t around to see the entire game from the field.

“It was definitely a great experience. It’s a point in my career that is sort of a peak in my career,” Barone said. “I’m trying to learn on the fly, but I have a coaching staff with Matt Passerelle and Hayden Carter, and a veteran team that have made it really easy on me. They go to work every day and they know how to work.”

At the end of the third inning, Barone crossed the third-base coaching box line to question a call and was thrown out of the game for violating social-distancing protocols put in place by the American Association.

“After the inning was over, I didn’t like a call and I straddled the third-base (coaching) line,” Barone said. “I was hoping to get warned, but the umpires did a good job of enforcing the rule. It’s difficult right now in this part of the season to remember all the rules. When you are in game mode it makes it difficult to think about COVID-19.”

On Sunday, as the teams were preparing for another afternoon game they were called off the field and the Milkmen posted an announcement on their website and social media accounts.

“Due to circumstances outside of our control, today’s game has been postponed to a later date! We’re so sorry for the inconvenience, and we will keep our fans up to date as we know information. Tickets will be good for a future game.

“I think as a manager I have to be prepared for everything. Knowing the climate of everything with the virus, you have to be prepared,” Barone said. “It’s obviously not a great situation. It’s been taken care of and we’re back to business as usual going through all the safety protocols from the city, county, state and league.

“It was a little hiccup in the road,” Barone added. “We’ve done everything to be safe and we’ll continue to do that.”

After a scheduled off day Monday, the teams were cleared to play Tuesday night and Barone picked up his second win — the first that he was in the dugout through its entirety.

“It was nice to finish the win,” Barone said, “and get the win in extra innings (Tuesday) night.”

Milwaukee led 3-2 late in the game before Chicago’s Tyler Lafendort hit a first-pitch home run off Milkmen closer Myles Smith to open the bottom of the ninth inning.

In the 10th, Milwaukee’s Aaron Hill led off with a walk, went to second on a wild pitch and scored on Mason Davis’ single to center field.

In the bottom half of the frame, the Dogs’ Victor Roache walked and went to second on a sacrifice bunt. After a strikeout, Tony Rosselli walked, but Peyton Gray secured the win with his second strikeout of the inning.

“It wasn’t exactly an easy inning. It was raining pretty heavy in the ninth and 10th innings,” Barone said. “We got out of there and we got lucky. … It was a really nice win, actually.”