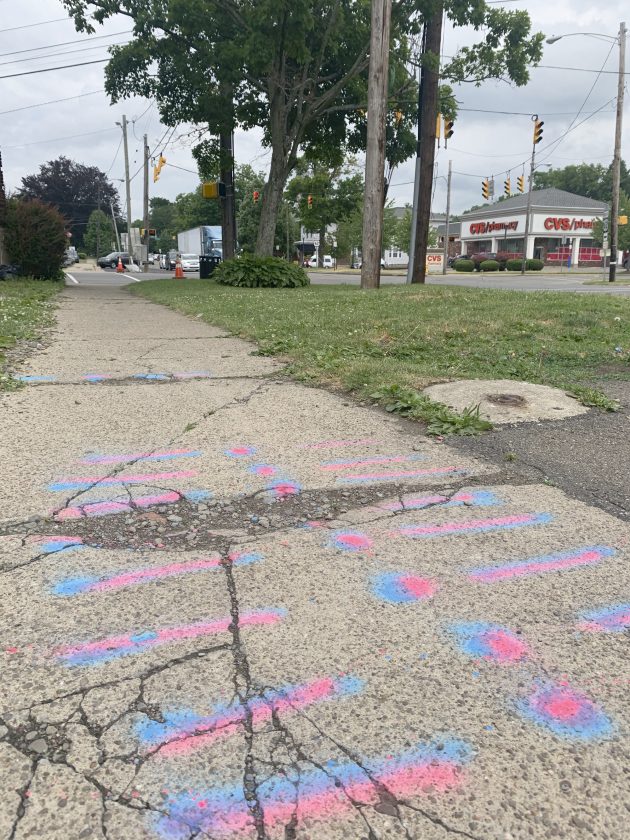 Times Observer photo by Josh Cotton Utility paint markings in the area of the intersection of Pennsylvania Ave. and Market St. are the first physical signs of the transformation that will bring a roundabout to the intersection.

The first physical signs of changes coming to the intersection at Market Sreet and Pennsylvania Avenue have appeared.

While the end result will be a roundabout, those first signs are a slew of paint markings that denote the location of the various utilities that run around, under and through the intersection.

Calling it “preliminary utility work,” she explained that the utility markings are part of the final design phase “so we know exactly where all the utilities are there so we can make sure the design plans match the locations of the utilities.”

When ground will be broken isn’t yet clear.

Harry acknowledged that the shutdown brought about by the pandemic did result in “all of our processes experienc(ing) some delays.”

But she pointed out that while the pandemic “had a slight play in that,” the “delay with moving through the preliminary design process” made more to do with Warren City Council attempting to change it’s mind.

“When all that happened, we halted our design process at that point,” she said, noting delays now are “still just the trickle down from that. Everything else in the timeline got delayed.”

The prior goal had been to construct the roundabout in 2021 but 2022 isn’t out of the realm of possibility.

“We don’t know exactly when we are going to start physical work there,” Harry said, explaining that it remains PennDOT’s goal to award the contract for the project in 2021.

“We still have next year as the goal for that,” she said, noting that the timeline for physical work at the intersection is tied to when that contract is awarded.