Times Observer photo by Lorri Drumm Mason Zercher, 7 of York. His family comes to their nearby camp every year, Smokey and his friend 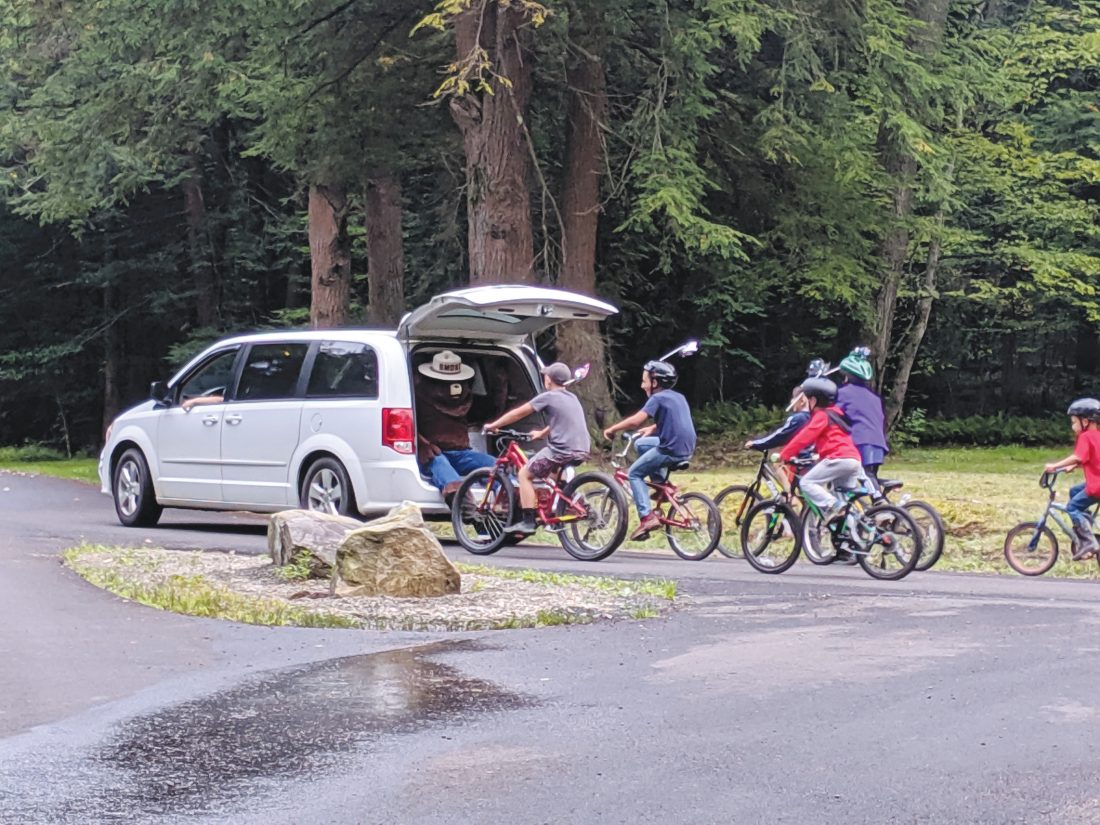 A bear with a reputation for dumping buckets of water on smoldering fires resisted the urge on Sunday as he arrived to find a smokey grill cooking hot dogs in his honor.

Smokey Bear celebrated his 75th birthday with a pavilion full of friends and fans on Sunday at Chapman State Park.

The bear, also known for one phrase — “Only you can prevent forest fires” — spoke not a word but waved, nodded and posed for lots of selfies with the crowd.

Many in the crowd were camping for the holiday weekend. Smokey picked up quite a group of cycling followers as he paraded through the campground, with his giant bear feet hanging from the back of a van.

As everyone gathered at Pavilion 4, Smokey was officially introduced by his friend, Jay Lindemuth. Lindemuth is a forest fire forester with the Pa. Department of Conservation and Natural Resources Bureau of Forestry. He told the crowd that Smokey is the “most recognized figure in fire prevention.” 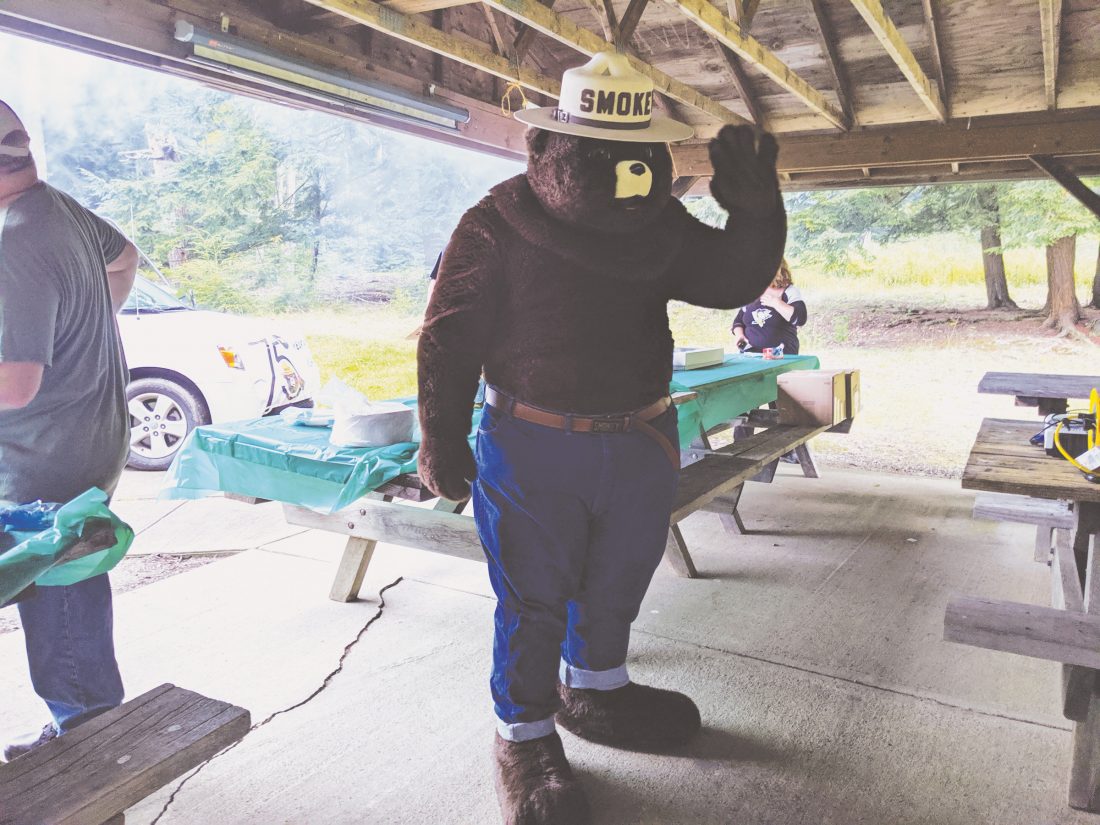 As Smokey stood facing the crowd, Lindemuth offered some background and posed a few fire-prevention related questions to those gathered.

Lindemuth said there have been 23 wildfires affecting 28 acres of land in Warren County so far this year. He described that as a slow year, in a good way. “I credit Smokey with teaching people how to prevent forest fires,” Lindemuth said as he patted Smokey’s back.

He then asked the crowd what season is the busiest for wildfires in the state. The first two guesses were summer and fall, but the correct answer was spring.

The leading cause of wildfires is burning garbage, according to Lindemuth. Garbage includes all sorts of debris, he said.

Those gathered sang Happy Birthday to Smokey, watched a video and enjoyed hot dogs and birthday cake before they headed back, many to their camp sites. 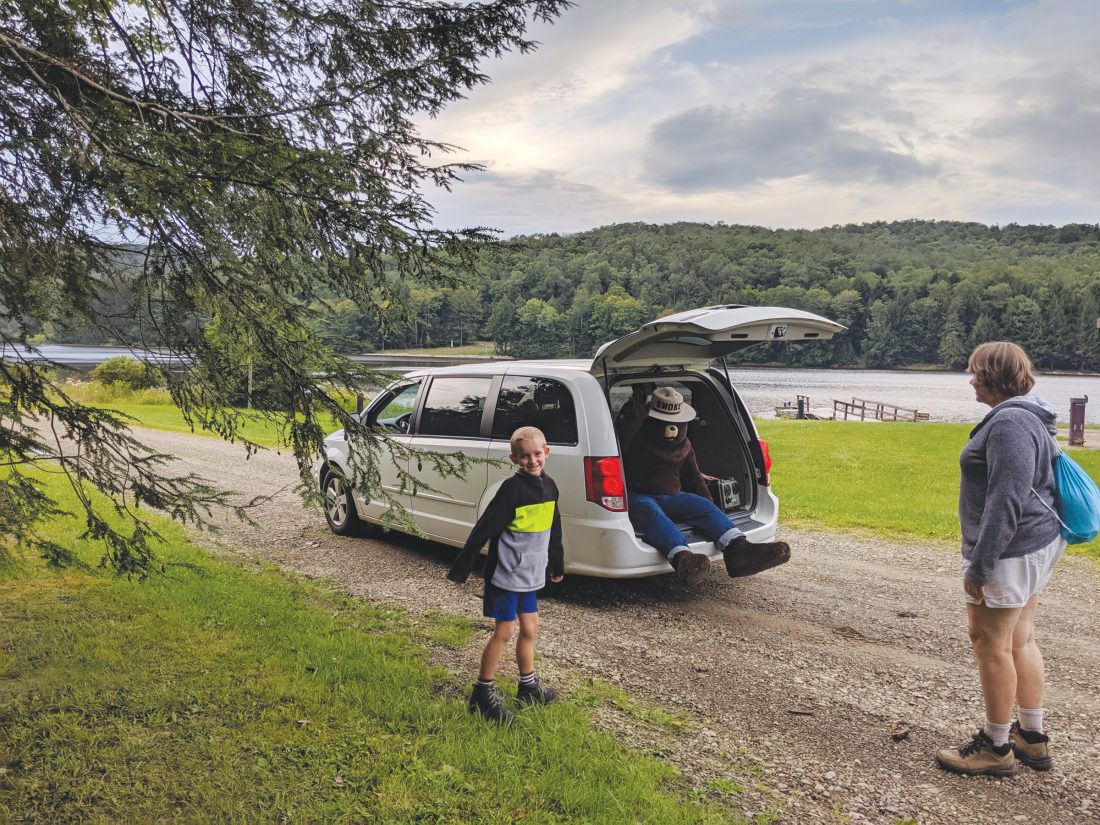 Times Observer photo by Lorri Drumm Mason Zercher, 7 of York. His family comes to their nearby camp every year, Smokey and his friend

Lindemuth addressed the campers in the crowd. “Always watch your camp fire, right Smokey,” he said as he again patted Smokey on the back. Smokey looked at Lindemuth, nodded and offered a bear thumbs up.