File Photo Emma Ruhlman puts up a shot during a game last season. 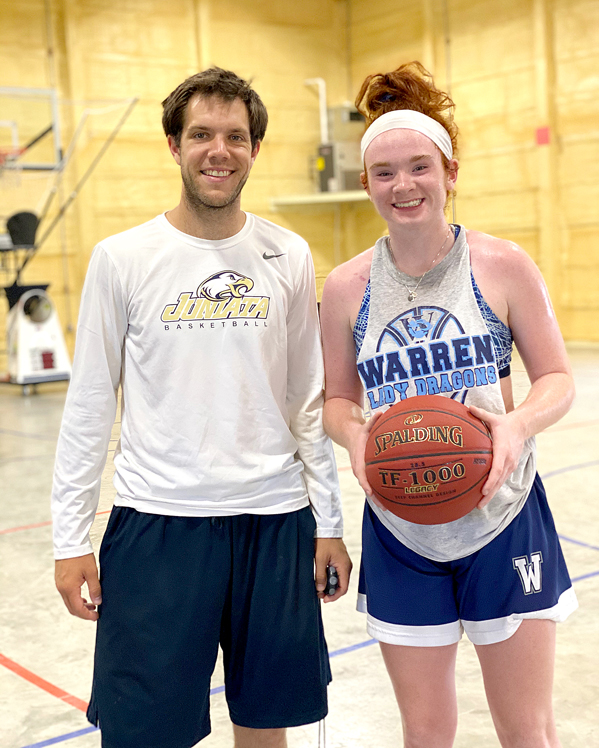 The coronavirus pandemic has left teenagers with a lot of free time.

First, students were sent home from school in March to learn remotely.

Then, during the first part of this summer, they were kept from gathering in large groups or going to malls, movie theaters, restaurants and parks.

For some, it’s been hard.

Not Warren junior Emma Ruhlman. She’s put her free time to good use. 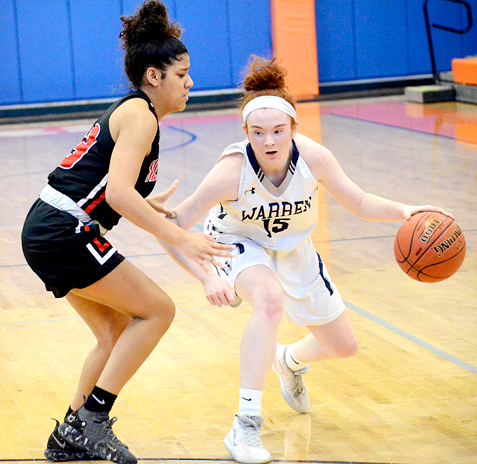 While exploring Twitter with the help one of her Western PA Bruins AAU basketball coaches Brian Murray, Ruhlman came across the #BeatTheTrainer challenge.

Created by Fadeaway Fitness founder and CEO Jeremy Hays, the challenge is a series of 100 basketball drills that are timed. The goal is to beat Hays’ time in each drill.

“I started (training) in Pittsburgh as a part-time thing. Then I moved back to my hometown of Wheeling, West Virginia where I knew it’d really take off,” Hays said by phone Friday afternoon. “This whole thing was pretty wild. I never meant for this to be a challenge and take off like it did.”

“Once the quarantine hit, I still had access to my gym so I’d do one video to put out to my followers and clients,” said Hays, who played collegiately at Juniata College where he broke the Eagles’ career records for steals and assists. “I put out a different video two or three days later and it went OK. After another couple of days, I put out a third video. Once I did the third video, I started putting time into it and it went very well. After the fourth video, I gave it a name.” 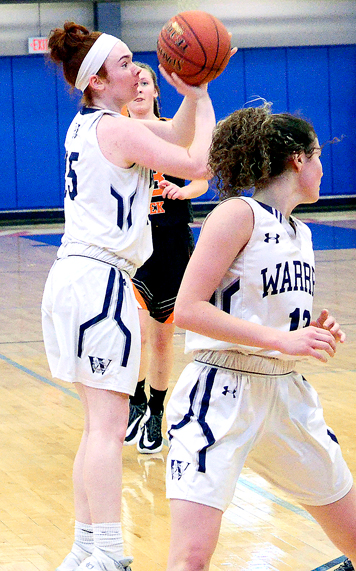 File Photo Emma Ruhlman puts up a shot during a game last season.

All of the drills are able to be accomplished by just one person, perfect for a COVID-19 quarantined teenager.

“They’re pretty quick challenges. They’d be something I’d do at the end of my workout,” Ruhlman said Friday morning. “It gave me new ideas for drills. Some of them took me a while. It’d take 30 minutes, but I’d be working on my handling and sometimes ball handling can be mundane and boring.”

On Wednesday, Ruhlman completed the 100th, and final, #BeatTheTrainer exercise.

“It’s a tribute to her work ethic for sure,” Warren head coach Lisa LaVan, who is also Emma’s mother, said Friday afternoon. “She’s a hard worker and a blue-collar kid. That’s what we have in our program. To see her working on her game when we couldn’t get in the gym, that’s huge.”

Ruhlman did not know of Fadeaway Fitness prior to the pandemic, but Hays had worked with other teammates of Ruhlman’s with the Western PA Bruins.

“Once I hit about Day 10, I picked up a crazy amount of traction,” Hays said. “Day 15 hit and I was in 47 states. Then I got into Canada and then Mexico. … It literally started super slowly and I never meant for it to be a challenge.”

Since beginning the challenge, Ruhlman has been introduced to Hays in person and even started training with him periodically at his West Virginia location.

“I just started doing them and as I kept doing them, Jeremy reached out to me,” Ruhlman said. “Jeremy does 1-on-1 training and stuff so my mom asked if I wanted to go work out with him.”

“Emma was doing it from Day 1 and she chipped away at it,” Hays said. “As things open up, kids are getting more and more active, and I am getting busier so I ended the challenge. She completed all 100. She might have been the first person to complete all 100 and post videos of all 100.”

The goal, of course, through all of the workouts and time dedicated to basketball is to make Ruhlman a better player.

It seems to be working so far.

Drawn to the game as a 3-year-old when her mom took over the Warren girls program, Ruhlman has excelled during her two years at the varsity level.

“Overall the challenge helped her with her ball handling and hand-eye coordination. As a 5-10 guard, it was good for her to work on it. Above all else, you can’t take time off,” LaVar said. “Don’t get me wrong, she has some rusty parts, but for the most part it has definitely helped.”

As a freshman, Ruhlman was a second-team all-star in Region 6 with classmate Riley Childress as the Dragons won the Pennsylvania Interscholastic Athletic Association District 10 Class 5A title for the second time in school history behind region and district Player of the Year Margo Loutzenhiser.

This past year, with Loutzenhiser graduated, Ruhlman took on a greater role. She averaged 15 points, 9.5 rebounds, 3.2 assists and 2.7 steals per game as Warren went 17-7 before losing in the District 10 semifinals. That third-place finish qualified the Dragons for the PIAA playoffs where they lost to undefeated defending state champion Chartiers Valley in the first round.

“I think the craziest part is somebody who I’ve never met or interacted with saw my videos, liked them and the next thing you know I’m training them in person,” Hays said of Ruhlman. “We grew a friendship and grew a relationship. It’s come full circle from a video to them driving between three and four hours to work out once or twice every couple of weeks.”

Ruhlman was named a first-team all-star in Region 6 and then recognized statewide with a spot on the Class 5A third team.

“I’ve been raised not to expect anything. I do it because I love it,” Ruhlman said. “Being recognized meant a lot. I’ve spending time in the gym and risking my social life to do this stuff. It showed that it was paying off and that’s encouraging.”

Now she has greater aspirations for her final two years at Warren.

If she continues to put in the work she has over the past several months, Ruhlman and the Dragons should be well on their way.

“We have some strong classes coming up, including a strong freshman class. My freshman and sophomore year, we were very young. Now we get to that point where we have a chance to go for another District 10 title,” Ruhlman said. “Individually, I’ll just keep working. Obviously the end goal will be to get a free education and play basketball for as long as I can.”