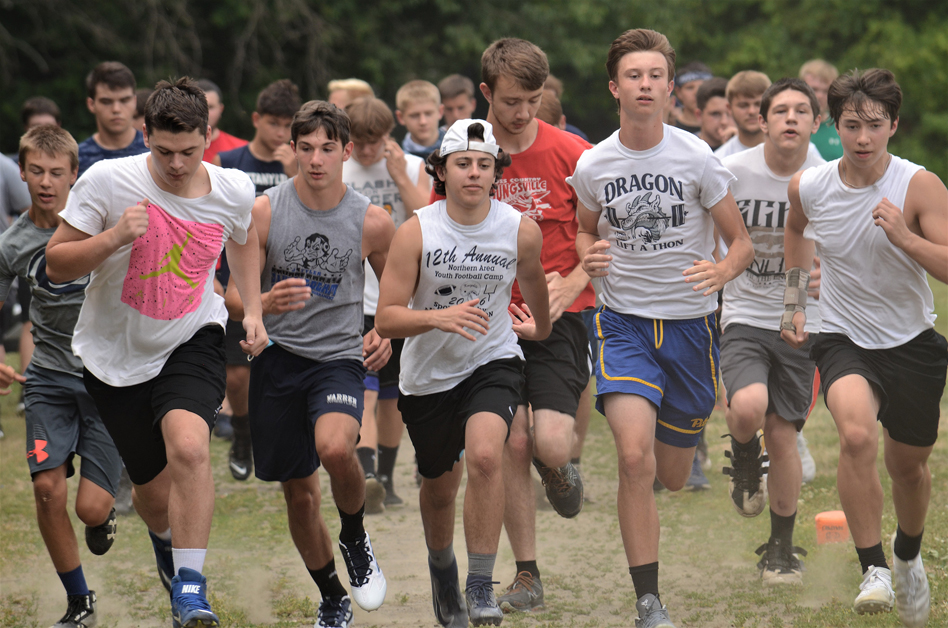 Times Observer photos by Brian Ferry In this file photo from last week, members of the Warren Area High School football team get in some conditioning.

Gov. Tom Wolf scaled back just how open the state of Pennsylvania is Wednesday afternoon.

For now, the restrictions will not put a stop to fall high school sports.

The Pennsylvania Interscholastic Athletic Association held a previously scheduled Board of Directors meeting Wednesday afternoon and shortly before 5 p.m. sent out a message on Twitter saying “PIAA is moving forward with the start of the Fall Sports Season as scheduled.”

During the meeting, which originally was not scheduled to address COVID-19, the Board of Directors said it would continue to monitor guidelines from the state, but unless the governor himself dictated, football heat acclimatization would begin as scheduled Aug. 10 with fall sports practices to follow Aug. 17.

“It was the consensus of the committee for us to get as many activities of sports starting with the fall and heat acclimatization starting on Aug. 10,” PIAA Executive Director Dr. Robert Lombardi said during the meeting. “We are trying to hold serve and stay the course based on any other information we received.”

In another tweet, @PIAA said, “Our focus is on the health and safety of student-athletes which is paramount in moving forward with athletics. Each member school has developed health and safety guidelines to allow athletics to continue as an important part of the school day. Participation in athletics has known health benefits, including promoting physical fitness and mental wellness which is necessary in a time of uncertainty for our student athletes.”

The committee did move up a previously scheduled early August Board of Directors meeting to July 29 where PIAA President Frank Majikes said another competition steering committee would provide the board with other fall sports considerations and possible new guidelines.

Acknowledging that things could change any day, Lombardi said “if things change, we would cooperatively work together to come up with alternate plans including possibly shortening of seasons and qualifiers if necessary.”

“We would like to compliment schools in how well they’ve done their health and safety plans because even though we’ve had a few hiccups in some areas of the state, most people are doing a pretty darned good job prescreening, interviewing, observing and practicing good hygiene, good health habits and making sure people are hydrated and taking care of their health and safety or well-being as they participate in out-of-season workouts,” Lombardi said.

One area of Wolf’s orders Wednesday that could affect high school sports is the requirement to limit indoor gatherings to no more than 25 people. Wolf did say that girls volleyball teams or any other fall team that wished to work out or practice indoors would have to adhere to the rule.

“We know it may be an inconvenience, but I believe this is a mitigation strategy that may be temporary,” Lombardi said. “Fall sports don’t start until Aug. 17 so we still have some time.”

Following the Board of Directors meeting, Lombardi answered questions from the media and said the board is committed to the fall season, in whatever format that takes. He said one school may be able to get 75% to 100% of its schedule in while another region in Pennsylvania may only get 25% of its schedule in.

“PIAA is committed to providing a season for all sports in the upcoming school year,” @PIAA tweeted, “and will be flexible if conditions would change.”

On Friday, the New Jersey Interscholastic Athletic Association expanded on its Return to Play plan and said games would not begin until one month later than originally planned.

In New Jersey, summer workouts were allowed beginning Monday and can continue until Aug. 28. There will then be a two-week break from Aug. 29 through Sept. 13, during which only virtual meetings will be allowed. Official fall sports practices will begin Sept. 14.

Girls tennis matches will begin Sept. 28 followed by all other sports except football on Oct. 1. The first night of high school football in New Jersey will be Oct. 2.

New York has yet to change any dates for fall sports with practices set to begin Aug. 24. Schools are required to submit reopening plans to the state by Aug. 1.