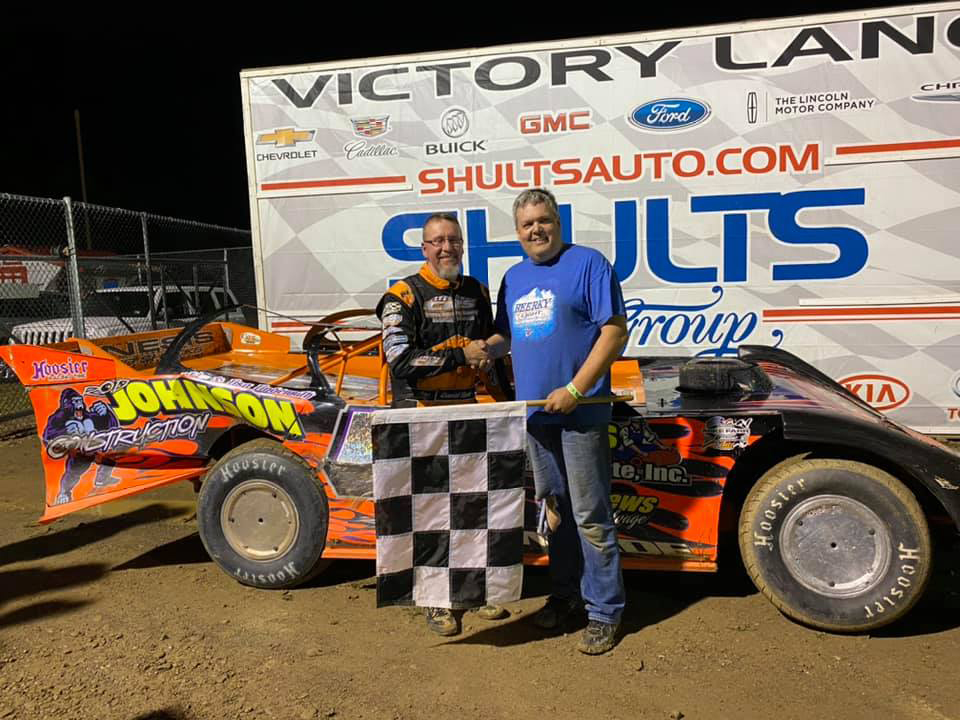 BUSTI — Stateline Speedway finally got the 2020 season underway with a mix of new faces and seasoned veterans in Victory Lane.

Mike Eschrich and Holden Heineman each scored their first-ever Stateline wins although both have had wins at other venues. Both first-time winners noted Stateline was the track they really wanted to win at so the victories were very satisfying.

Darrell Bossard and Steve Dixon brought the 23-car field to green for the start of the Bill Law Memorial. Law was the person responsible for bringing the RUSH Late Models to the area. The field included Kyle Murray, Law’s grandson. Bossard led at turn two. Yellow flew at lap two with Brian Larson, former champion Jason Genco, Hunter Proctor and David Parker got together in turn two. On the second attempt to get the race underway Alex Haight, Andy Michael, Genco, Proctor, and Parker piled up in turn one. Michael headed pitside. When the race finally started it was Dixon leading Blair, Bossard, Wonderling and Chad Schauers. At lap four Dixon and Blair were side by side with Blair leading at turn two on lap five. Lapped traffic came into play at seven laps but it did not slow Blair. At halfway, Blair was still leading Dixon, Bossard, Wonderling and Waters. At 12 laps Bossard was second. The rest of the race ran without incident with Blair winning the $1,500 race presented by Tony Diboo of Pleasant Valley Contractors.

The Outlaw E-Mods started their 20-lap main with Troy Johnson and Timothy Rockwell at the front. Johnson took the lead at the start with Rockwell, Steve Rex, Eschrich and Randy Hall filling out the top five at the end of one. At lap six, Zach Johnson slammed the turn one wall hard. The red flag was displayed while the track safety crew tended to Johnson. When green was flying again it was still Troy Johnson leading the way over Rockwell, Eschrich, Michael McGee and Dennis Lunger as the top five. The next yellow was for debris on the front straight, then when green was shown Dave Lamphere, Cale Crocker, Jimmy Diabo, Bryon Johnson and Deven Dudenhoeffer got tangled in turn two with Dudenhoeffer, Lamphere and Crocker needing to pit. Dudenhoeffer was towed off and Lamphere returned to the action after attention in the pit. At halfway, it was Johnson leading with Eschrich up to second over McGee, Hall and Lunger. Hall was third by lap 15 and at lap 18 Eschrich was leading, getting by Johnson in turn three. Johnson and Hall were even for second at lap 19 with Hall securing the spot on the backstretch. At the finish it was Eschrich standing in Victory Lane, his first-ever win at Stateline. Hall was second, Johnson third, McGee fourth and Lunger fifth.

The $2,500-to-win Super Late Model finale presented by Joel Smith of Close Racing Supply was paced to the green by Scott and Chad Valone with Scott immediately powering out to the lead. At the end of the opening lap it was Scott leading Valone, Dave Lyon, John Volpe and Doug Eck. At the end of one lap Blair, Dutch Davies and Chris Hackett got together in turn four. Blair didn’t stop but Davis and Hackett did, and thus were charged with the caution. Scott again led the field another lap when Davies, Khole Wanzer and Matt Urban got together in four. The order was now Scott, Lyon, Blair, Valone and Bob Dorman. Blair was second at four laps. Yellow again flew at six laps when Wendell Pinckney slowed to a stop coming out of turn four, just off the racing surface. At eight complete Blair and Scott were side by side at the line with Blair solidly holding the lead a lap later. At halfway it was Blair, Scott, Lyon, Dave Hess Jr. and Dorman showing the way. Disaster struck for the leader a lap past halfway with Easton Hedman bounced off the back straight wall, collecting the leader as he was putting a lap on him. Blair headed pitside and did not return to the action. For the green it was now Scott leading Lyon, Hess, Dorman and Valone. Hess took second at lap 14 with Damian Bidwell coming into the top five at lap 15. Dorman and Lyon were even at lap 16 with Dorman holding the spot at 18. Valone replaced Bidwell for fifth at 19. With five to go Scott had built a quarter-lap lead over Hess, Dorman, Lyon and Valone. That remained the order through to the checkers.

Cody Stronghart and Bob Vogt brought the RUSH Pro-Mod main event to green but it was former class champion Chad Carlson darting to the lead in turn one. All would be for naught, however, as yellow would negate the start. When lap one was finally in the books it was Carlson leading Adam Ashcroft, Vogt, Lunger — the reigning champion — and Greg Johnson. Yellow was flying at the end of two laps when Chris Paar got sideways in turn three and recovered, but Matt Putt and Stronghart spun together trying to avoid contact.

At six laps Donald May Jr. spun in turn one with the order now Ashcroft, Lunger, Johnson, Carlson and Vogt. At 13 laps Lunger was closing on the leader and with five laps to go the two were side by side at the stripe. With four to go Ashcroft got stuck in lapped traffic, allowing Lunger to gain the lead and go onto the win. Ashcroft settled for second over Carlson, Johnson and Vogt.

The Penn-Ohio Pro Stocks had Jason Covey and Bill Reeves leading the way to green with Covey heading out front at the drop of the green. Covey led Black and defending champion John Boardman with Reeves and Joe Stajnrajh side by side for fourth. A lap later Stajnrajh held fourth with Gary Fisher now fifth. That order remained the same over the rest of the 15-lapper in the all-green event.

The final event of the season-opener was the 12-lap feature for the Challenger cars. Pole-sitter William Van Guilder grabbed the immediate lead but it was Heineman leading from third starting position by the end of lap two with Van Guilder, John Mease, Chris Horton and Kevin Covell filling out the top five. At halfway Heineman was still leading Van Guilder with Horton up to third and Mease back to fourth. Covell was still holding fifth. Yellow flew at halfway when Brandon Hall and Covell got together and made an unscheduled trip to the infield. When racing resumed Mease took over second. At nine laps Van Guilder and Horton were side by side for third with Horton securing the spot on the back straight. At the finish it was Heineman gaining his first-ever Stateline win over a closing Horton, Covell, Mark Winans and Nick Eck