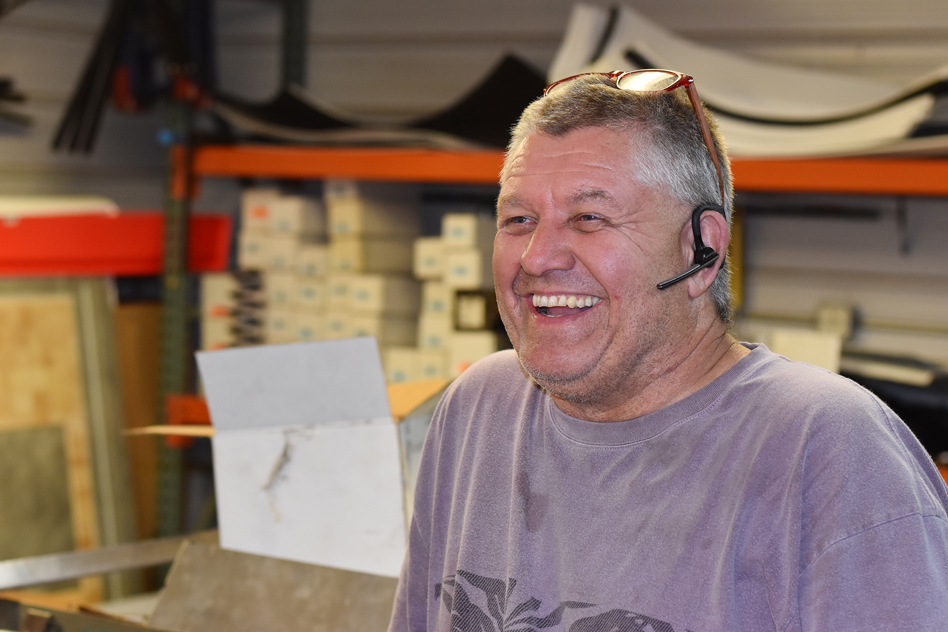 Times Observer Photo by Scott Kindberg Chub Frank shares a laugh during an interview at his garage Thursday afternoon.

When the photo arrived in my email inbox the next day, it was clear that it was a special moment for Chub Frank, one of the area’s all-time great drivers. Not only was the memorial race his second victory of the evening at the Hammett oval, but it was also one that he cherished a little more because of who it was honoring.

So as he looked in Schnarzy’s direction, Frank’s smile could have lit up the night sky, matched only by the ear-to-ear grin of Farr’s widow, Bobbie, who Frank held in a warm embrace. Because even though the 58-year-old Bear Lake resident is still at the top of his racing game, the relationships he’s built in the sport for more than 40 years remain just as important.

It’s mid-afternoon on Thursday and Frank’s massive garage, a 20-minute drive from Jamestown, New York, is bustling with activity as crew members work on cars in preparation for another weekend of action. While fans know Frank for his successes on the track — he is a member of the National Dirt Late Model Hall of Fame, a four-time STARS point champion and the owner of 16 World of Outlaw wins — he also has a successful race car fabrication and parts supply business that occupies his time when he’s not pursuing victories behind the wheel.

It’s that success in his vocation that has made him adjust his avocation just a bit, scratching much of his competitive “itch” by competing in the Crate Late-Model Division after spending most of his career exclusively guiding open-motor Super Late Models around tracks throughout North America.

“It’s customer-based, basically,” Frank said about why he’s taken to running in the Crate Late Model Division. “I’ve got so many people I was doing stuff for, building cars or selling Crate cars, and they would call me all the time and ask me what to do with the car. The only thing I (used to) go off is my Open car or from what someone else who drives them tells me. Now that I run them, I can give them better information.”

Accumulating information has been what has helped Frank reach the pinnacle of the sport. He literally grew up at Stateline Speedway in Busti, New York, a track that was once owned by his father, Jerry, which gave the former a chance to learn every aspect of the business — from driving to track maintenance. To say that experience has paid dividends would be a huge understatement.

In almost any other sport, a 58-year-old would be competing on the “senior tour,” if at all, but Frank continues to be one of the top names in dirt track racing. Last Sunday was just one more example of that prowess. But trophies and paydays aren’t the only thing that motivate Frank. That’s why Schnars’ photograph of Frank and Bobbie Farr last Sunday night affirmed the old saying, “A picture is worth a thousand words.”

Mike Farr died four years ago at 65 after a brief battle with cancer. A Pennsylvania native who lived in Roswell, Georgia, Farr worked more than 45 years in motorsports, first as a dirt track and drag racer and then for more than 30 years in the shock business, including stints with Carrera Shocks, Pro Shocks and Genesis.

“I knew (Farr) growing up around the track before I was racing,” Frank said. “He did help a lot of different guys through the years.”

Specifically, Farr assisted Frank in securing sponsorships and product endorsements, and was instrumental in putting the deal together with Lester Buildings that led to the construction of the latter’s new shop after a devastating fire in 2004.

In a life-comes-full-circle world, it’s Frank who is now taking a page from his late mentor/friend with a few smiles thrown in for good measure.

As he stood in his shop earlier this week, Frank had a pair of glasses — “cheaters,” if you will — perched on the top of his head, but they are only when he’s reading things up close. Otherwise, Frank described his vision as “actually really good,” which is important in his line of work. He also feels good physically and was scheduled to race at Thunder Mountain in Brookville on Friday and at Stateline tonight.

“I’m not going to run any marathons,” he said, “but … it’s still a workout. You’re working your brain a lot, and it’s your shoulders and your upper arms more than anything now. Your reflexes still have to be good. … The older you get, your reflexes may not be as quick, but sometimes you can see way ahead, so it gives you more time.”

He added: “I’ve still got the desire, I guess you could say, but I’m not saying I want to pound it down the road when I was like 25 or anything like that.”

The smiles and hugs in Victory Lane at tracks closer to home suit him just fine right now.