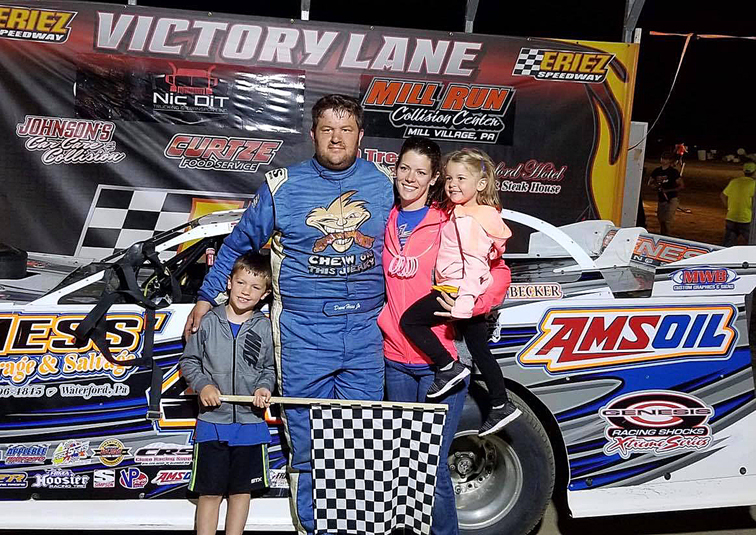 HAMMETT, Pa. — A beautiful, bright afternoon greeted fans arriving at Eriez Speedway for the fifth week of racing at the Green Township oval.

The L & D Tree Service Street Stocks were the first feature on the track with defending champion John Boardman sitting on the pole and Curt Bish Jr. to his right. Boardman led lap one with Bish and former champion Jimmy Kennerknecht following while Mike Reed and Chris McGuire, another former champion, were battling for fourth. McGuire had the spot at lap two, then was third at lap four. At the halfway point, it was Boardman leading Bish, McGuire, Kennerknecht, and Reed. Only one yellow slowed the event, that being for Douglas Eck, who had stopped coming out of turn two with two laps to go. The final order of the top five was Boardman, McGuire, Bish, Kennerknecht, and Reed.

Gary Miller and Matt Alexander brought the Johnson’s Car Care and Collision Economod feature to green with Miller leading lap one over Alexander, Kyle Layton, Jason Brightman, and Zack Lenart. At lap two, Layton came to a stop in turn four. In turn one at lap four, Miller got sideways directly in front of Alexander, but collected it and both continued. Then, a lap later, Miller spun up to the turn-one wall, ending his night. For the green it was Alexander, Nate Young, Zack Lenart, Jason Brightman, and Eric Reinwald at the front.

At this point Layton rejoined the event, two laps down. Also at lap five, Nate Young got sideways in turn two and dropped all the way back to eighth. Alexander and Lenart were side by side for the lead at the halfway point with Reinwald, Simon, and Brightman following. At lap eight, one beyond halfway, Alexander slipped high in turn two, allowing Lenart to lead the lap just as yellow flew for Dale Reiser, who spun in turn four. With five to go, Lenart was leading Alexander, Reinwald, Mitchell Wright and Simon. Young took over fifth at lap 11, but Simon held it again at lap 13. Lenart went on to his first-ever Eriez Speedway win over Alexander, Reinwald, Wright and Simon.

Two former champions, Darrell Bossard and Jason Genco, brought the Nic Dit Trucking RUSH Late Model feature to green with Bossard leading Genco, another former champion Kyle Zimmerman, Chub Frank (a past national series champion), and Paul Norman. Frank was in a car that had been sold to a Canadian customer who asked that he “shake it down.” Genco was challenging for the lead at lap four when Khole Wanzer came to a halt in turn four. At green, it was Bossard leading Genco, Matt Sipes, Frank, and Kyle Zimmerman. In turn three, Genco took over the lead, but wound up slapping the turn-four wall, his night done.

At green, Frank was the leader over Sipes, Bossard, Zimmerman, and Kyle Murray. On this green, Wanzer spun to the turn-one wall and headed to the pit. Sipes suffered a flat left rear at six laps. Murray took over third after the green, lost it to Zimmerman, then retook it. At nine laps David Parker got into the turn-one wall.

The order at halfway was Frank, Bossard, Murray, Zimmerman, and Billy Henry. Yellow flew at lap 11 for a flat tire on Chad Clement’s mount. Breyton Santee got into fifth at lap 12. With five to go, Murray went wide in turn two, allowing Zimmerman to get by for the spot. At 16, Murray slapped the front-stretch wall and then the final caution appeared with two to go when Alex Haight stopped in the back straight. The order for the top five at the checkers was Frank, Bossard, Santee, Murray and Zimmerman. Not a bad night for a “shake down”.

The L & D Tree Service Challengers were next up with Chris Horton and Gary Youngs on the front row. Horton took the lead at the green with Emily Story, Todd Hanlon, John Mease and Youngs showing the way at the end of lap one. Dalton Eggleston threw a wheel on the front straight on lap two, bringing out caution. On the back stretch on lap five, cars started spinning but all maintained speed and recovered without the necessity of a caution. However, debris in turn four slowed the race. At halfway, Horton was leading Stoyer, Mark Lawrence, Dillon Kineston and Jessica Harvey. Caution again was shown at lap seven when Zack Eller slowed in turn three. At the green, it was now Horton, Stoyer, Kineston, Pat Hanlon and Harvey. Stoyer was challenging for the lead at lap eight when Rod Brit stopped on the track for the next caution. On the next restart, Kineston got into the front straight wall and the final caution came at 10 laps when James Weigle stopped. For the run to the checkers, Stoyer was challenging Horton for the lead, finally taking it on the final set of corners, emerging from turn four with the lead and her first-ever feature win in a hard-fought duel.

The Mill Run Collision Super Late Models, the premier class at Eriez Speedway for all its 59-year history, were brought to Mark Matthews’ green flag by Andy Boozel and former champion Dave Hess Jr. Caution flew early when Joe Petyak spun in turn two, necessitating a complete restart. Under the yellow, Mike Knight gave up his third position and pitted. Boozel led most of lap one followed by Hess, Bob Dorman, Greg Oakes and Chris Hackett, another former champion. However, Hess was the leader when the lap finished. Yellow flew for Doug Eck, Mike Pegher and Brandon Groters, slow in turn four. Hess, Oakes, Hackett, Chub Frank and David Scott were the leaders at halfway. By lap 16, Hess had a quarter-lap lead. At the finish Frank was second and Scott was up to third behind Hess. Dorman wound up fourth and Oakes fifth. Hess became the first repeat winner on the season after five events.

The final event of the evening was for the Waterford Hotel E-Mods and started with Mike McGee and Randy Hall showing the way. Hall led at the end of one with McGee, Ken Zimmer, former champion Troy Johnson, and many-time champion Joel Watson rounding out the top five. At three laps, Watson was fourth, third at five laps, and second at nine when McGee pitted. The top five remained in that order through to the checkers in the night’s only caution-free feature.