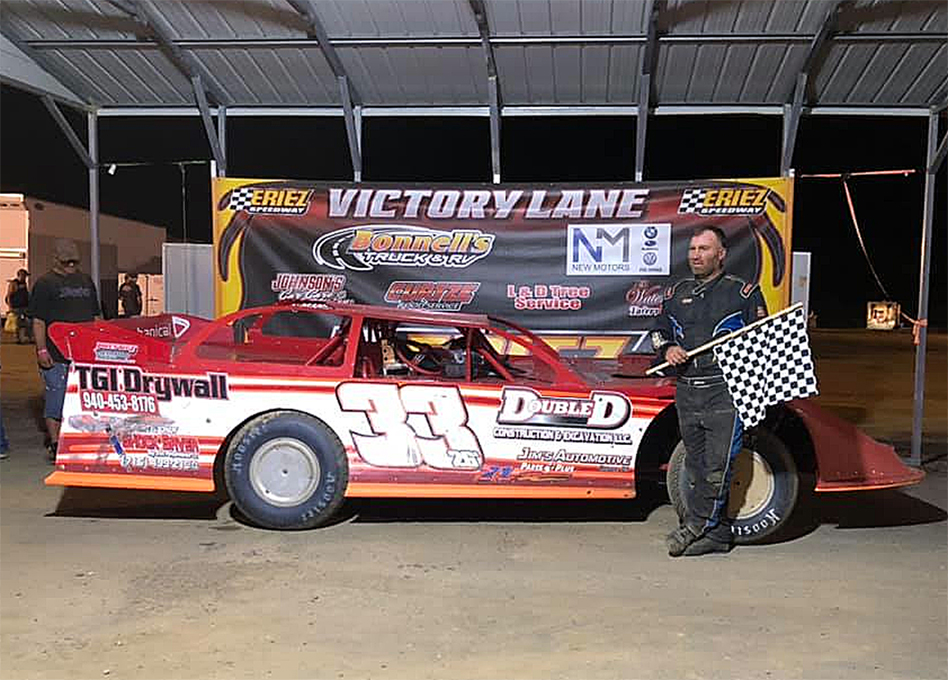 Photo By Holly Hackett Chris Hackett poses for a photo in Victory Lane at Eriez Speedway after claiming the Mill Run Collision Center Super Late Model win of the year.

The card of 18 heats and six features provided a solid evening of entertainment for area race fans with Chris Hackett, a former class champion, picking up his first Mill Run Collision Center Super Late Model win of the year; Darrell Bossard getting his first win of the season after an exciting RUSH Late Model duel with Kyle Murray; Joel Watson, a many-time class champion, prevailed in the 20-lap E-Mod finale; and Jimmy Kennerknecht, also a former class champion, winning his first of the year. Nate Young won his first of the season at Eriez, taking the lead a lap past the halfway mark. Dylan Greene won the L & D Tree Service Challenger feature.

Feature racing was opened with the RUSH Late Models running a 20-lap main event. Kyle Murray, grandson of Bill Law, who introduced this area to the concept of “crate” racing, and Matt Sipes led the way. Murray took off to the early lead, but caution slowed the pace when Khole Wanzer spun in turn two of lap two. When the race resumed Breyton Santee was challenging Murray for the top spot with 10th-starting Bossard, Sipes, and Paul Norman right behind.

Santee was challenging for the lead at lap seven when Josh Beckstrom and Brad Stoeger spun in turn one. On the restart Joe Long and Wanzer made contact in turn two, both needing to be towed from the track. At lap nine Billy Henry spun on the back straight while Bossard was challenging for the lead. At the end of the lap Murray was still holding the spot. At the halfway mark it was Murray leading Bossard, Santee, Norman, and Brian Larson. Jacob Peterson came to fifth at lap 11. Yellow again flew for Stoeger when he spun in turn two. He exited the event to the pit. At lap 14 yellow was shown when a fire was reported in the pit area. When racing resumed Murray started increasing his lead, but at lap 17 Bossard was closing again and took the lead by the end of the lap. On the final lap Murray mounted a challenge for the win but came up short. Santee was third, Norman fourth, and Sipes fifth.

Next were the L and D Tree Service Challengers with Chris Horton and Dylan Greene leading the charge to the green. Greene led lap one followed by Horton, Nick Robie, Mitchell Rex, and Lane Reinwald. At three laps, Zack Eller came to third with John Mease coming into fifth at lap five then to fourth at lap seven. Robie was challenging Horton for second at lap 10, but Horton held on. The final order for the top five was Greene, Horton, Mease, Eller, and Wes Stull.

The former track champion led Curt Bish Jr., Applebee, Joshua Seippel, and Jason Covey after one lap. On lap two, in turn two, Andrew Van Every spun, then in turn four Cameron Nastasi spun. The green flag was withdrawn for debris on the back straight.

Caution again was shown when Kyle Couchenour came to a halt on the back straight. Tom Teed stopped at the pit entrance at lap six, then Bill Applebee exited to the pit, trailing smoke. Reigning champion John Boardman was fourth at the green with Jason Black fifth. Boardman came to second at the green, but yellow was immediately thrown when Luke Rutsky and Gary Fisher spun in turn two. Fisher retired from the event while Rutsky was able to continue. It was now Kennerknecht leading Seippel, Boardman, Black, and Steve Yokum. Black got by Yokum for fourth by halfway. Former champion Chris McGuire came to fifth at lap 11, but at 14 laps had a flat right rear tire. He fell back to ninth at the checkers. Kennerknecht scored the win over Seippel, Boardman, Black, and Yokum.

E-Mods were led to green for their feature by Randy Hall and John Boyd. Third starting Brent Rhebergen took the lead at lap two, over Boyd, Hall, Zach Johnson, and Nate Hartzell. Johnson headed to the infield with apparent mechanical woes at lap three with Mike McGee moving to fourth and Joel Watson to fifth. Brandon Grossman banged the turn one wall on lap eight hard enough that two tow trucks were required to take him to the pit. At nine laps Hall was the leader over Rhebergen, Boyd, Watson, and Brian Ruhlman, visiting from Michigan.

At nine laps Steve Simon slowed and pitted. The halfway order was Hall, Watson, Rhebergen, Ruhlman, and Boyd. At 11, Watson was challenging for the lead, taking it at turn two, but Hall roared back to the front at the end of the lap. His lead was short lived with Watson leading lap 13, then Hall at 14, and Watson again at 15. With five to go it was Watson by a length over Hall, Ruhlman (an Eldora Speedway champion), Rhebergen, and Boyd. At 17 laps McGee spun 360 degrees and tried to keep going, but the car stalled and yellow was shown. He then exited pitside. At the checkers it was Watson over Hall, Ruhlman, Rhebergen, and Kyle Moore.

The headliner Mill Run Collision Center Super Late Models started their 25-lap main event with Brandon Groters and Bump Hedman showing the way to green. Groters led Hedman, Ryan Scott, Wyatt Scott, and Chris Hackett through lap one. Ryan Scott replaced Wyatt Scott for third at lap five when Bob Dorman spun in turn two, then on the green Doug Eck spun in turns one and two. Dave Hess Jr. came to a stop against the turn one wall at lap seven, then two laps later Steve Kania and Eck spun in what was becoming ‘calamity corner,” turn two. Hedman abandoned second and headed to the pit under caution. At halfway it was Groters, Hackett, Wyatt Scott, Mike Knight, and Greg Oakes.

At lap 16, Dorman spun in turn four, then, under yellow, Oakes stopped at turn two. With eight to go Hackett was challenging for the lead, having the spot by a small margin then solidly leading a lap later when Groters, Steve Scaife, and Dorman spun together. Being Dorman’s third caution, he was sent pitside. Under caution, reigning champion Max Blair pitted with body damage to the right rear and a flat right rear tire. At this point it was Hackett leading Wyatt Scott, Knight, Andy Boozel, and Matt Lux. Kyle Scott took over fifth at lap 20. Lux took it back, but Kyle Scott was firmly in the spot at lap 22. At the checkers it was Hackett, Wyatt Scott, Knight, Boozel, and Kyle Scott.

The nightcap was for the Economods with Kyle Adkins and Garrett Calvert bringing the field to green. Calvert led lap one over Adkins, Gary Olson, Matt Alexander, and Tim Stronghart. Yellow flew at the end of the opening lap when Donald May spun in turn one. At the end of two laps Calvert lead a side by side race for second with Olson holding a slight edge over Alexander, Nate Young, and Kyle Layton. At three laps, Olson held second, then Alexander spun in turn two. At the green the field only made it to turn one when Brad Boyd spun. At four laps it was Calvert over fifth-starting Young, Kyle Layton, and Bob Vogt. At five laps the Gary Sullivan and Zack Lenart spun on the front straight. At six laps it was Calvert, Young, Layton, Vogt, and Jason Brightman. Yellow again at lap seven when Brad Boyd spun in three and four. At halfway it was Calvert, Young, Layton, Vogt, and Adkins. With six to go Young got by for the lead, going on to lead by half a straight with three to go. Vogt got to second at 13 laps. At the finish it was Young, Vogt, Calvert, Steve Simon, and Layton as the top five.