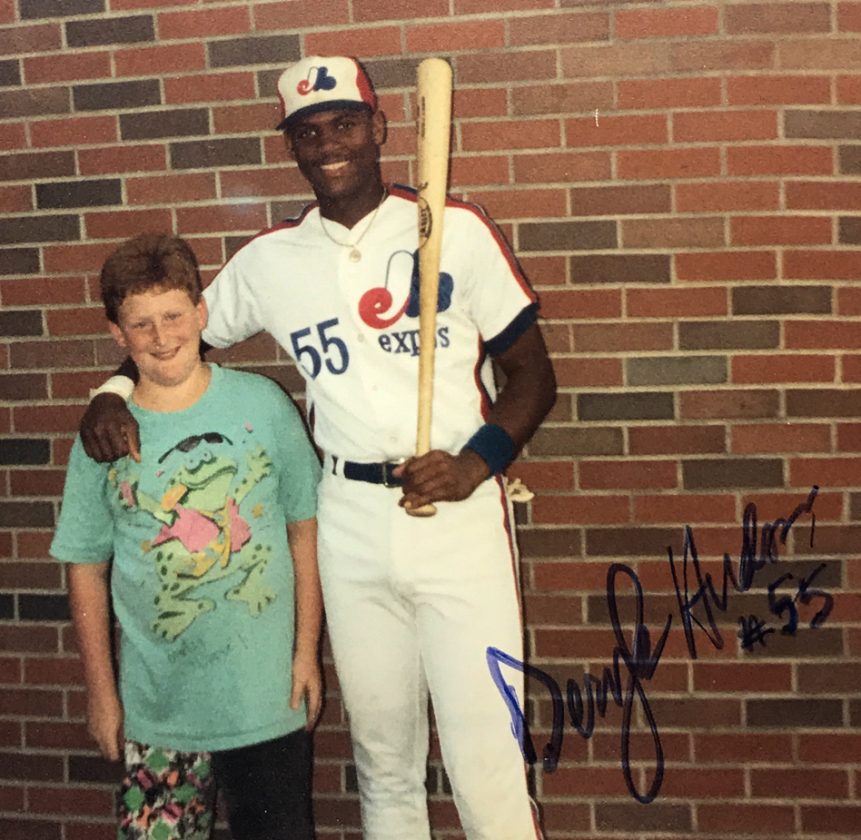 Submitted Photo Deryk Hudson is pictured with 12-year-old Jerry Lee during the summer of 1989 when Hudson played for the Jamestown Expos of the New York-Pennsylvania League.

EDITOR’S NOTE: The following article first appeared in The Post-Journal on June 18, 2017, detailing a special relationship between a 12-year-old boy and a member of the Jamestown Expos of the New York-Pennsylvania League. More than 30 years later, that summer of 1989 still resonates with Jerry Lee of Jamestown, who is now the marketing manager at Falconer Printing.

Deryk Hudson is not bound for the Baseball Hall of Fame. Fact is, he played just two minor league seasons in the Montreal Expos’ farm system, the first in Jamestown in 1989 and the second in Rockford, Illinois the following year.

His career offensive numbers, according to Baseball Reference.com, read like this: 172 games, 147 hits, including 26 doubles, two triples, 10 home runs, 84 RBIs and a .246 batting average.

Hudson’s professional baseball career was over at 22. 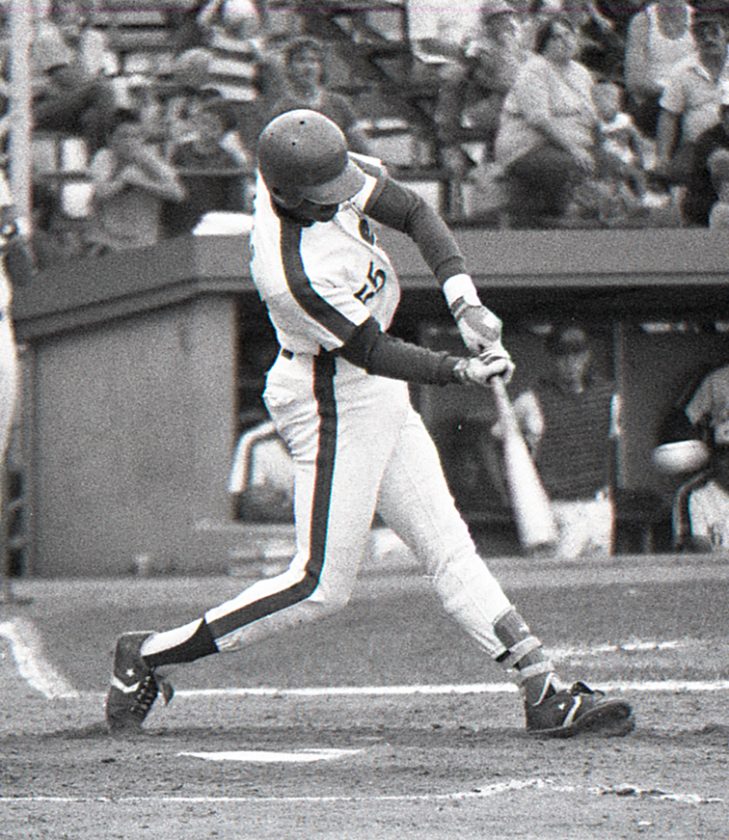 Post-Journal File Photo Deryk Hudson is pictured during the summer of 1989 when he played for the Jamestown Expos of the New York-Penn League.

But for Jamestown native Jerry Lee, who spent most of his summer of 1989 at the Falconer Street ballpark formerly known as College Stadium, Hudson stands among the best to ever play.

Or, more accurately, the best to ever pay attention.

Because for three months that summer nearly 30 years ago, the Oakland, California native’s simple acts of kindness helped Lee, then 12 years old, deal with life circumstances that could have led him to spiral out of control.

Instead, Hudson was the definition of character — doing the right thing when nobody is looking — a trait that Lee, now 40 and a graphic designer and an adjunct marketing instructor at St. Bonaventure University, took time to recognize in a Facebook post earlier this week. 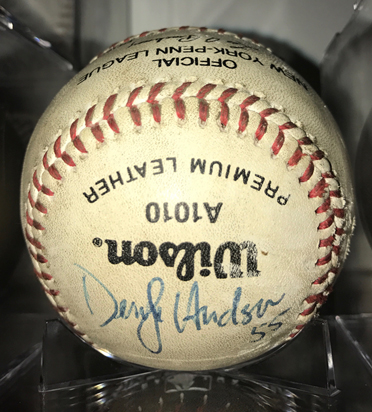 Submitted Photo A baseball Deryk Hudson signed for Jerry Lee in the summer of 1989 that Lee still has kept to this day.

“The Berlin Wall came down, people rose up in Tiananmen Square, Exxon-Valdez painted the ocean black and Michael Keaton was Batman,” Lee wrote in his post dated last Wednesday. “A lot happened in the world that year, but at 12 years old, the bigger event for me was witnessing my parents’ divorce. Seeing my family split up. Losing a sense of stability.

“It made for a rough year. At that age, though, things don’t really hit you in an obvious way. They’re silent. And they sneak up on you in the years that follow. I don’t remember that year being very troubling as much as it was confusing.”

“My little sister stayed with my Mom, and I moved out with my Dad,” Lee’s post continued. “It’s amazing how quiet the world gets when you go from living in a house as a family of four to a upstairs apartment with a suddenly-single, 40-year old father — especially when you’re both often at a loss for words.”

Lee admitted that because of his circumstances, “things could have been really bad.” 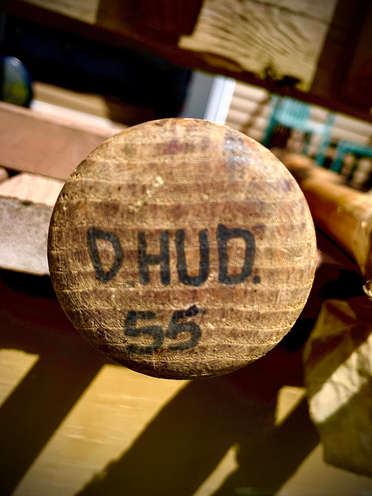 Submitted Photo The knob of a bat that Hudson gave Lee 31 years ago.

Instead, he and his dad spent their summer nights in the third-base bleachers at College Stadium, eating $1.50 hot dogs and rooting on the Jamestown Expos.

“Something a little magical also happened that season,” Lee wrote. “Something that took the right combination of stadium design, childhood fandom and genuine, sincere courtesy. The way the stadium was designed forced the players to walk through the main concourse en route to the locker room.”

That permitted Lee to not only obtain autographs, but also to forge an improbable bond with Hudson, the young man from Oakland, California.

“As I waited one night, just as I had many others, I heard, ‘Rusty!’ thrown at me by a tall outfielder named Deryk Hudson. No doubt perplexed, I looked up at him, and as he stared down to me, I responded, ‘My name is Jerry.'”

It didn’t matter. Apparently, Lee reminded Hudson of a kid from his neighborhood in Oakland named Rusty, so a nickname was born.

“I was on a first-name basis — sort of — with a professional baseball player,” Lee wrote. “Following that introduction, Deryk met me at the gate every game and gave me a high-five, always calling me ‘by name,’ and always signing whatever I had for him that day. One game, he even traded me one of his bats for a couple Post-Journal newspaper clippings for his own scrapbook.”

A bond was being created.

One night, in fact, Lee wandered through the grass outside the left-field wall in search of a home run ball that Hudson hit earlier that evening.

“It paid off as I found the ball, put it in a protective case and brought it back to the stadium the next day to return it to its rightful owner,” Lee wrote. “As happy as he was to see it, Mr. Hudson told me that my house would make a better home for it, signed it and handed it back.”

Lee also made a practice of getting to games early in order to have a chat with Hudson near the dugout. Later in the season, when an injury forced Hudson out of the game, he joined Lee in the bleachers. In street clothes.

“Maybe it was only a couple innings. Hell, maybe it was a couple pitches, but it wasn’t something he had to do, “Lee wrote. “Seriously. Who does that? Who makes those kinds of efforts, consistently, to befriend a 12-year-old fan on a daily basis. Someone special does.”

The Expos went on to win the New York-Penn League championship that season and Hudson ended up in Rockford in 1990. While Hudson wasn’t immediately available for comment for this story, his time in Jamestown had a lasting impression on Lee.

“1989 was a rough year for me,” he wrote. “And as much as I loved baseball, the sport itself didn’t do much. That little bit of magic (thanks to Hudson) was the glue that kept my spirits up throughout that summer, kept me running to the stadium, and kept me out of the low points and pitfalls that divorce can put a kid through.

“I grew to love baseball. And I still adore it, because baseball has a way of inviting a sense of Americana, humility and wonder like no other sport. And it welcomes people like Deryk Hudson and provides them an opportunity to do amazing things. Deryk took full advantage of that. Maybe he knew. Maybe he didn’t. Maybe he just missed his neighborhood friends in Oakland. Whatever it was, he helped me.

“Until today, I’ve always looked at my autographed home run ball, newspaper clippings and photos as evidence of my baseball fandom, but when I received a message from Deryk Hudson today, in response to a recent effort of mine to get in touch with him, the magic came back. And all of a sudden, I remembered what it was like as that kid, to have someone make your day. And I just wanted to say, ‘Thanks.'”

UPDATE: Last Wednesday, Lee made another post to his Facebook. This time it featured a photo of a baseball bat with the following explanation: “Most everything about this Louisville Slugger has faded off or weathered away, but the ink at the end from its original Jamestown Expos owner, “D HUD 55” is still pretty legible. A cracked bat that once belonged to Deryk Hudson served well for “Rusty” for a good decade after he gifted it to me. It’s in pretty poor shape these days, but I’d bet Mr. Hudson would be happier knowing it led an active retired life.”