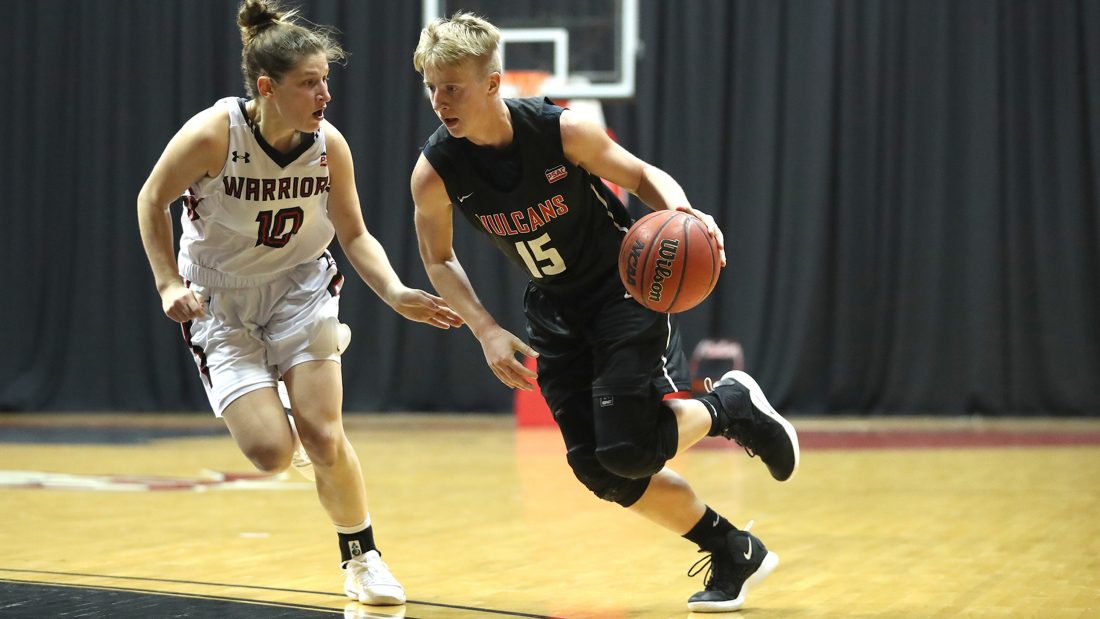 Photo courtesy California University of Pennsylvania D.J. Hahn had her college basketball career come to an abrupt end with the outbreak of the COVID-19 pandemic, but looked back fondly on her four years as a Cal Vulcan.

D.J. Hahn was playing perhaps the best basketball of her career.

The California University of Pennsylvania senior and Warren Area High School graduate had scored in double figures in eight of her final nine games leading into the Vulcans’ first-round game in the NCAA Tournament against fellow PSAC foe Gannon, along with her usual stellar defense and rebounding.

The story that played out was one that is all too familiar.

“It was Thursday morning and we just had a practice at Cal U and we finished up on a good note everyone went back to their respective dorms and packed their things,” she said. “We boarded the bus and four hours later we arrived at the hotel we would be staying at that evening. We unpacked and got our basketball things ready for a shootaround at Gannon’s facilities. Every team gets a 50-minute shootaround the day before the games begin and were about 20 minutes into ours and it is going GREAT!”

Then, they all got the news that none of them wanted to hear. 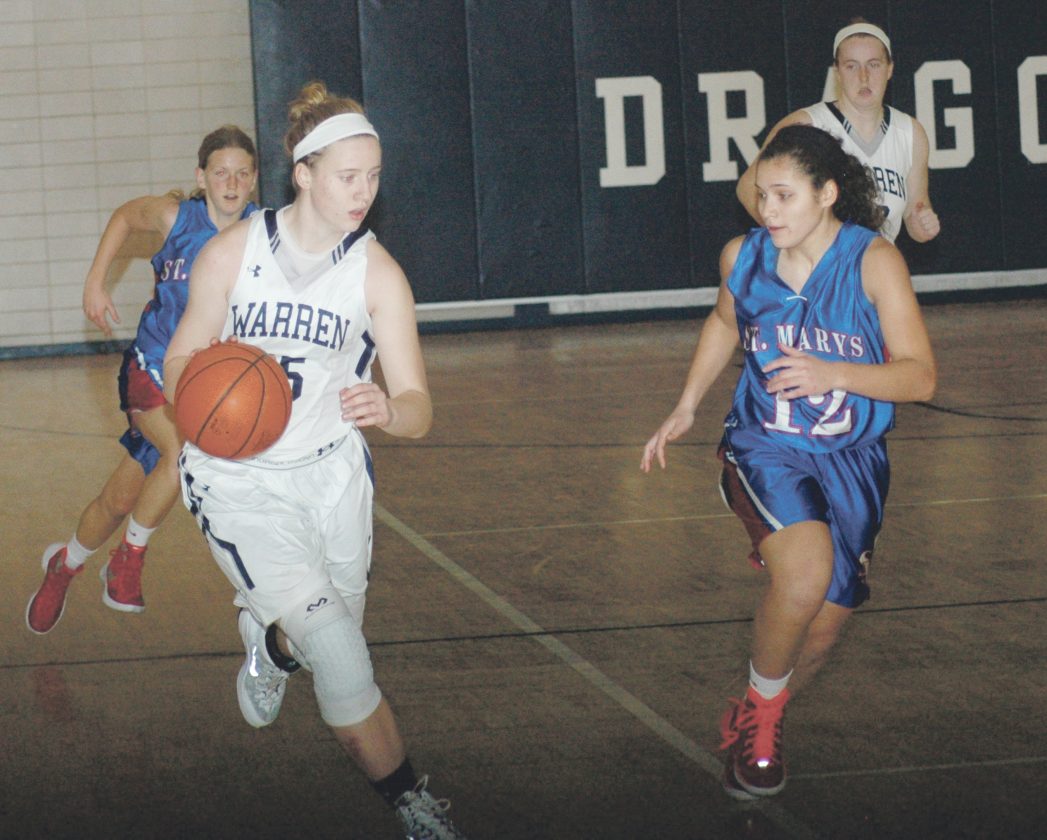 Warren’s D.J. Hahn is shown here in a December 2015 game against St. Marys. Hahn eclipsed 1,000-career point in helping lead the Lady Dragons to their first-ever District 10 championship that season.

“Next thing we know the coaches bring us into a huddle and say: ‘Guys we’re really sorry, but the NCAA has just canceled all championship games,'” Hahn recalled. “I couldn’t think in that moment. I was at a loss of words. Just like that my basketball career had ended. It was a sick to my stomach feeling, because I was going into the NCAA tournament thinking I’ll still have one more game and after a win, it would be the same thought process, one more game, almost as if something was taken from me and I had no chance to defend myself.”

The Vulcans still had about 30 minutes left on the floor at the Hammermill Center and decided to make the most of it.

“They weren’t about to kick us out,” Hahn said. “We played a 3-point shooting game and ran around that gym having a blast knowing it was our last time playing ball with each other. After our shootaround, we went back to the hotel packed up our things and drove all the way back to Cal U. It was the longest drive for a shoot around in my entire life.”

For Hahn, she takes pride in knowing she was playing her best when it mattered the most.

“The coaches and I both thought that I had finally started to play like I knew how,” she said. “I remembered in the PSAC tournament when we were playing IUP and I fouled out in overtime, I remembered walking off the floor and coach T saying ‘Keep your chin up, that was one hell of a game.’ I thought to myself if we do not make the big dance I’ll be OK going out on this game. I am at peace when I go back and reflect on my career and how I finished.”

Like most, her life has been a little different since the outbreak of COVID-19. Classes are now being done entirely online with campuses across the country being shut down.

“Personally for me the online adjustment for my classes is a nightmare!” she said. “My easier classes this semester have turned into hard classes and my difficult classes are impossible. I make do just like every other student in college is right now though and I am chugging along. I am hopping on the bandwagon and getting myself a graduation gift in May, one of those Zoom University sweatshirts.

She is working toward graduating with her degree in Mechatronics Engineering, which is her top priority right now.

And the finish line is in sight.

“Graduating will ultimately be my biggest accomplishment,” she said. “Coach John White (her assistant coach at Warren), would always check in on me and say your degree is most important.”

The extra time has also given her a chance to reflect on the last four years at Cal. They have been filled with a lot of memories, hard work and great friends, among many other things.

“I have grown the most academically, learning to juggle schoolwork better with a more demanding sports load,” she said. “Ultimately, I have grown mentally with time and experience so I would have to say that college and basketball did me well.”

So what’s next after graduation?

“I would just like to see where life takes me,” she said, while adding: “I would like to go on a vacation to a beach somewhere though.”

That vacation will most certainly have been earned, given the daily grind of being a college athlete.

And while she might take a short break from basketball, it’s something that will always be a big part of her life.

“Basketball has always been a huge part of my life; it is how I relate to life,” she said. “It will always be a part of me. I will go back to Cal U and watch my teammates play. I still do that with Warren!

“Playing, I will take a step back and reflect on everything. I think basketball and I have a love/hate relationship and it’s time to hang up the shoes for a bit. Lisa LaVan (one hell of a coach) and I talked about this and she said that it is OK to want to have that break and take that time away, but in the end I won’t be able to stay away forever. She said she went through the same thing, and look at her now she’s been coaching forever! So, I’d say I’ll be alright.”

She sites LaVan, White, and friends Paige and Rachel Wilson (fellow Cal U student-athletes) for always being there for her as well.

“Just a big thank you to all of them for everything they’ve done,” she said.

Hahn was a senior for LaVan when they won the first District 10 program in program history in 2016, and the coach marveled at just how far she has come.

“She was kind of gawky when she was young, in junior high, but you could always see the drive, the athleticism,” LaVan said. “To see where she is today from a basketball standpoint is phenomenal. How well she’s taken care of her body to get to the level where she’s at, just how much bigger and strong she is than a lot of other girls on the court. That’s saying a lot when you play in the PSAC.”

As proud as her former coach is of her basketball transformation, her academic pursuits is where she has impressed the most.

“Academically, was a big thing. That was my biggest concern with her,” LaVan said. “I’m proud of who she’s become academically. She’s worked really hard for it. It’s funny, sometimes I think the athletic stuff comes easy for her. I remember telling her when she got a full ride, I told her this is your job, don’t screw it up. You figure out a way to keep that job for four years. It’s hard to tell a kid how much college costs and I remember putting a price tag on it

Warren’s D.J. Hahn is shown here in a December 2015 game against St. Marys. Hahn eclipsed 1,000-career point in helping lead the Lady Dragons to their first-ever District 10 championship that season.

Photo courtesy California University of Pennsylvania D.J. Hahn had her college basketball career come to an abrupt end with the outbreak of the COVID-19 pandemic, but looked back fondly on her four years as a Cal Vulcan.

for her. I said they’re paying you to put on a Cal uniform. In the classroom, on the court, you have to put everything into it. And she has.”

And while her whole life is in front of her, she also knows how college and basketball have shaped her and helped to make her who she is today.

“My friends,” she said about what she’d remember the most from college. “I have met the best people coming to college, not only the basketball team but the other students in my major. My teammates have told me so many times that they wish they were as close to people in there major like I am with people in mine. I will also remember what it feels like to step on the court and to just have that adrenaline rush that I wish everyone would get to experience because it’s a feeling like no other.

“Most importantly I will remember entering college with my best friend from not only high school, let’s take it way back to second grade when we met, when we would play together in little league and in the YMCA league, Paige Wilson. She has always brought the best out in me and I can’t thank her enough. She came to every one of my games in college and checked in on me 25/8. And let’s not forget her little sister Rachel when she came to Cal U, too! We had the whole gang back together. That is what I will remember most.”