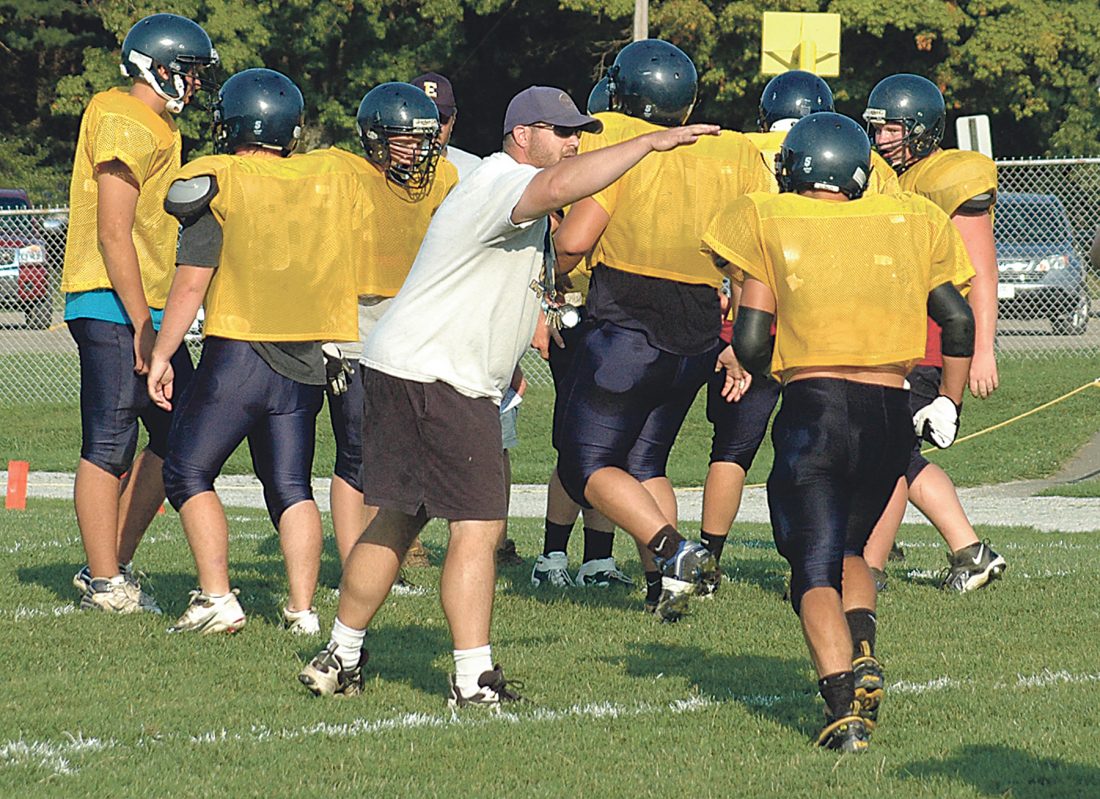 In this file photo, Eisenhower head football coach Jim Penley directs his team during a preseason practice. Penley, who is also a history teacher and the school’s athletic director, reflected on the value of leadership and how he’s handling the uncertainty that the COVID-19 pandemic has brought.

Adversity reveals character. That is true now more than ever, as both the United States and the world as a whole are dealing with the COVID-19 pandemic.

As a history teacher, head football coach and athletic director at Eisenhower, Jim Penley is a leader – a leader of young people who need it now more than ever.

Seniors being robbed of their spring sports season, graduation and other milestones is something that may seem small given what is going on in the world, but nevertheless has tremendous significance.

“I feel like everyone knows how it’s probably going to turn out,” Penley said. “It’s frustrating and upsetting for these kids, these seniors.”

While admittedly there’s not much that can take away that sting they are feeling, there are still incredible lessons to be learned.

“Nothing you’re going to say is going to make them feel better,” Penley said. “I think their parents are already telling them a lot of what I would say. You can work hard and prepare for that opportunity, but sometimes it doesn’t happen or it gets taken away from you. To work so hard for something and have it taken away, it isn’t fair. For the kids, this is devastating.”

This is the first time for everybody, young and old alike, experiencing a crisis like this. But even in what could be described as the worst of times, can come good.

Leaders emerge, character is revealed and people step up.

“You really see the demeanor of young men and women in difficult situations,” Penley said, while drawing comparisons to the young men he leads onto the football field on Friday nights in the fall. “When you’re winning, it’s easy to lead and come across as a leader. It’s like I always tell my guys in close games, the really good teams are calm and level-headed.

That shows you who the leaders are, the people who can do positive things in crisis.”

For his part, Penley is embracing his role as a leader. He made sure his students were aware of the virus weeks before it directly affected us here in the United States.

“I’m so used to daily interaction,” he said. “I’d like to believe, I’m always trying to teach them life lessons. We talked about it in class for two weeks before it went down. I said ‘hey, this is something to be concerned about. Be informed, know the things you can do.’

“I consider myself lucky to be in a position to be a leader of young people. There’s a lot of life lessons that we’re learning. For a lot of kids today, we’ve been very blessed in America to not experience this kind of stuff. Right now, it’s a time they’re getting the opportunity to experience that.”

The coach in him is trying to make sure his players stay active and prepared. While the season doesn’t kick off until August, football is a year-round commitment. There’s no access to the weight room and with no spring practices, Penley, along with his athletes, have gotten creative.

“Myself personally, I’m concerned about next year,” he said. “When you watch the news and see these first, second and third wave type situations 18 months out, that’s something that concerns me as a coach. But I told the guys and the parents that have contacted me that you still have to prepare. If you have goals and desires, you have to find a way to do it. Sometimes it will come at a price. For us, I’m throwing some workouts out there. I know they’re putting in the time. For those guys in football, and the other sports, I’m trying to give them as much information as they can use. Here are a couple of workouts, no weights, it’s real old-school, but that’s what I try to set up from them.”

Sports aside, he also reflected on the true leaders in society. They aren’t the people you see on TV every day, but rather the ones that are on the front lines, tackling this virus head-on.

“People who are going out there and encouraging others, nurses being an amazing example,” he said. “They’re faceless, by comparison. They sacrifice and know the chances of getting sick are high. Those are the people that stay calm. In communities all over this country, we have people that are doing that.”

Like most of us, Penley’s had a lot more free time, and it’s something he’s taken advantage of.

“I’ve been getting a lot of stuff done around the house,” he said. “Our family greenhouse, we haven’t really been up there since my mom passed, so my boys and I have been cleaning that out and getting stuff planted. Just stuff I never get the chance to do.”

And when we do get back to normal, whenever that may be, he feels we will have learned a lot.

“I think this will be a good learning lesson for all of us,” he said. “We’ve had it pretty easy.”