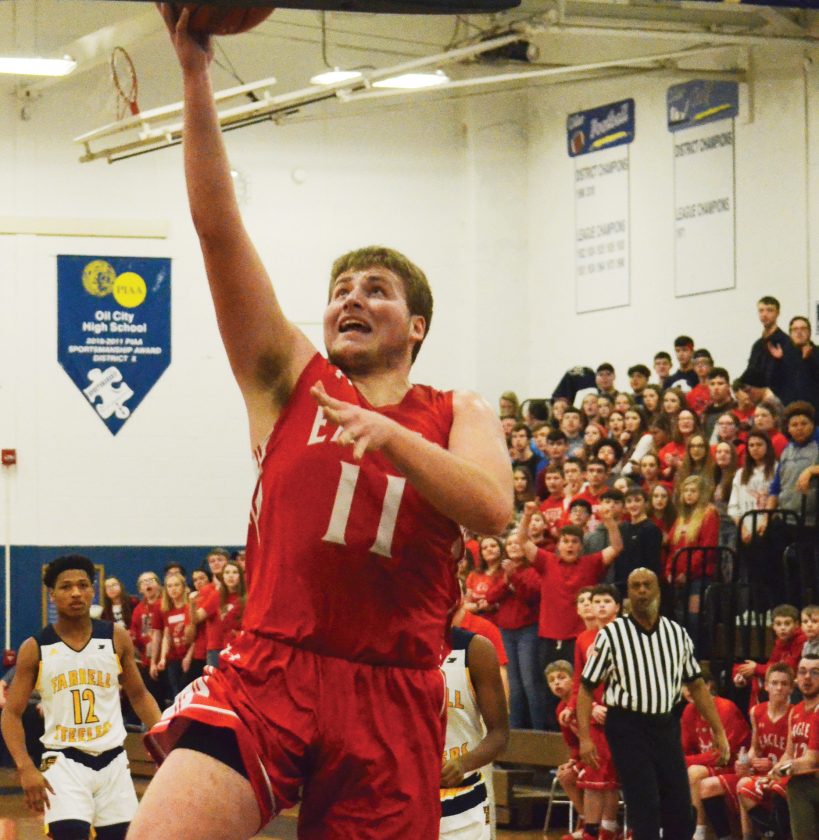 Times Observer photo Following a senior season in which he surpassed 1,000 career points, was named Region 3 Player of the Year, and led the Youngsville Eagles to the state playoffs for the first time in 28 years, Gage Hendrickson will take his talents to Division III Westminster next season.

“We were playing a summer league game at Venango Catholic in his first summer as head coach and the year before my sophomore year,” said Hendrickson. “I was standing beside the bench during a free throw and he asked me what my goals were. I really didn’t have any as a 14-year-old playing summer league basketball. He told me I needed to have some and being a thousand-point scorer and leading Youngsville to a playoff run weren’t bad ones to have. That really gave me motivation and dedication to the grind of basketball.”

Well, his senior season, Gage surpassed 1,000 career points and was named the District 10 Region 3 Player of the Year and Youngsville’s boys basketball team had its most successful season in 28 years, finishing 19-8 in advancing to the Class 2A state playoffs.

Coach DeLoof also remembers that conversation from three seasons ago.

“I knew the first couple of times being around him, seeing him play — big frame, moves well, good cuts — that he could be a college basketball player,” said DeLoof, who was previously an assistant coach at Division III Pittsburgh at Bradford. “I saw that he had those things that college coaches look for,” said DeLoof. “That’s probably why I brought that up to him.” 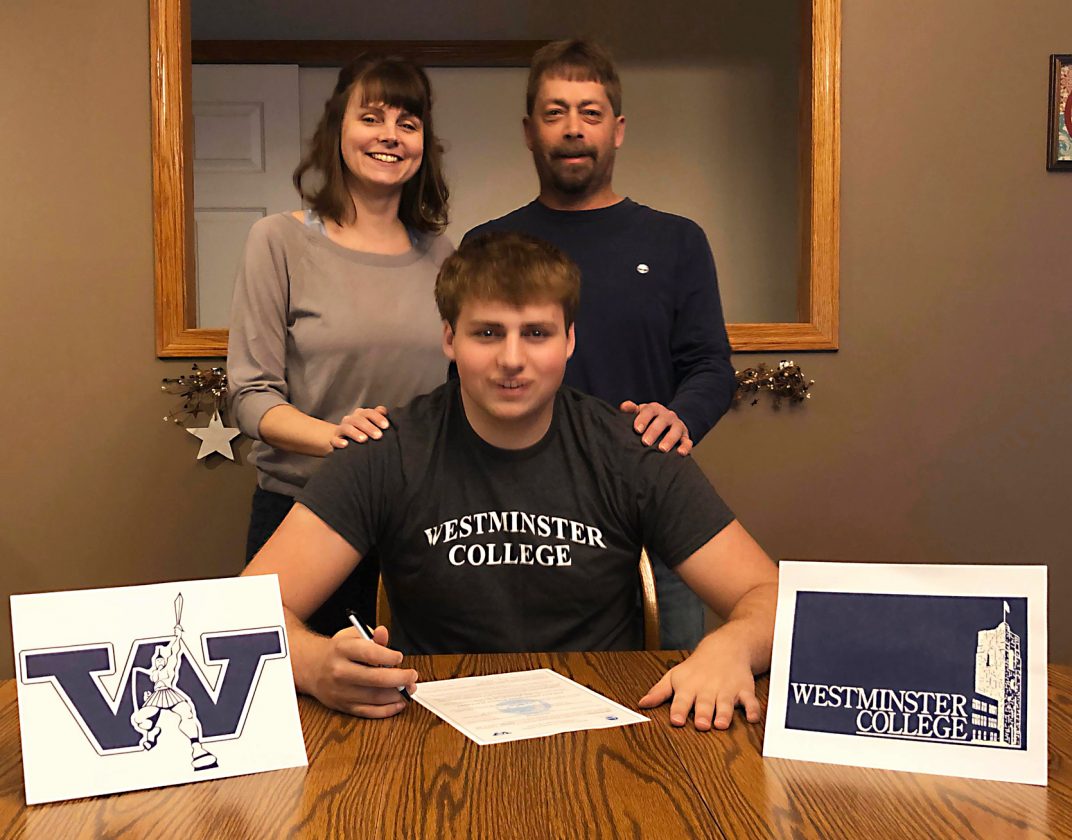 Photo submitted to Times Observer Gage Hendrickson, in front of his mother, Carrie, and father, Brian, will be playing basketball at Westminster in the 2020-21 season.

Hendrickson will take what he’s learned to Division III Westminster for his freshman season.

“I decided to go to Westminster because I wanted to go somewhere close to home, but also be able to be in a new environment while doing the things I love to do like play basketball,” said Hendrickson. “I believe Westminster saw in me an athlete that would be an asset both physically on the court and academically in the classroom. Coach DeLoof is correct because of the hundreds of hours year-round that I have put into myself and the sport of basketball. I wanted to be the best that I could possibly be and he sees that desire in me.”

DeLoof could see the maturity in Gage — even as a sophomore.

“And that’s just progressed,” said DeLoof. “He’s gotten a little more confidence in himself on and off the court. Gage is a soft-soken kid. He’s not the extreme vocal leader, but there was more of that by his senior year.

“I always knew he was one of the best players on the floor, in the region, and in the northwest (part of the state),” said DeLoof. “I might have thought that before he did.”

But then Gage began to see that all the hard work he was putting in was paying off.

“It was the work he and that core group of guys put in,” said DeLoof. “They were willing to put in the work in the summers, open gyms after school… From there, you improve and you start winning games. You can’t change that culture of losing to winning until you improve, until you get good enough to win. Until you get better at basketball, you’re not going to win basketball games.”

DeLoof won’t forget the playoff victory over Rocky Grove. He also won’t forget practice the day before, during a drill toward the end of practice and Gage dripping of sweat due to the effort he was putting in.

“Like it’s the first practice of the year,” said DeLoof. “That’s the reason right there.”

Gage going on to play college basketball, “younger kids see that and that’s something they want to do…

Hendrickson also thanked assistant coach Dave Sherman “for always wanting to help me further my basketball skills and do different workouts throughout the offseason. Without Coach Sherm, I would not have been able to accomplish nearly as much throughout the last three years.”

“I would meet Gage on Mason Road at night sometimes,” said Sherman. “We’d run that hill… It’s steep. He’d be pouring sweat. I had to leave once before he did. He said he’s ok, and was going to run it one more time. Typical. Probably 85 degrees that night. Neighbors on their porch would just look at us and chuckle.

“We lost a close game at home to Cambridge Springs, and Jesse is a little concerned about the players bouncing back on Saturday morning and getting something out of practice,” said Sherman. “He had to stress the importance in between drills of gaining momentum down the stretch. As he’s talking through a drill, there is one player already hitting the drill at 100%… It’s Gage. Not sure he heard a word Jesse said. He was too focused on the challenge in front of him. It was uplifting to see.”

Some of Gage’s favorite memories of basketball camps, AAU tournaments “with our tiny Youngsville team,” scoring 1,000 and making a playoff run don’t happen without those goals.

“My goals moving forward in basketball are I want to win and do whatever I can to be the best possible asset to the Westminster basketball program (which will include Warren senior Thomas Bablak as a freshman teammate),” said Hendrickson. “For my career, I want to be successful doing something that I really enjoy. Currently, I see that being some sort of sports medicine career. My fears about the next chapter of my life are being able to balance playing basketball and learning at the next level. I need to be able to manage my time and perform at a high level. I think I will be able to overcome that with my hard work and determination and my love for the sport of basketball.”

He has mom and dad convinced.

“As far as the emotions that it stirs up for his dad and I, we couldn’t be more proud of him,” said Carrie Hendrickson. “At the same time, we are so sad to see this phase of his life end. He started basketball in third grade. He went through his first two years thinking you could only get five fouls per season. He was generally the biggest kid on the court, but he was never fighting for the ball. When he told us about the ‘five fouls per season’ rule, it all made sense! He is still probably one of the most laid back, level-headed kids you’ll ever meet. We never would have imagined then how much his hard work and dedication would pay off.”