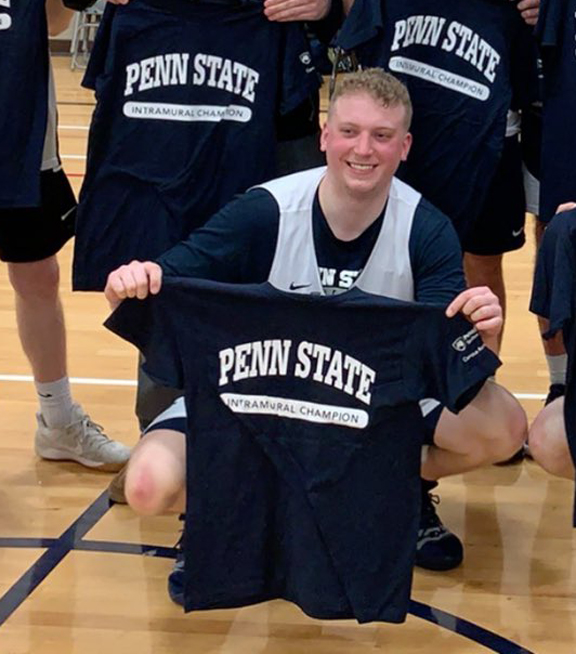 Penn State’s Devin Nowacki, a 2016 WAHS graduate, shown here after winning an intramural championship with his fellow student managers, has been a part of the Penn State men’s basketball program as a team manager for the last four seasons. The Lions were poised to make their first NCAA Tournament appearance since 2011 before the COVID-19 outbreak.

It’s totally within the realm of possibility that, if not for the COVID-19 pandemic that has taken over day-to-day life as we know, it, the Penn State men’s basketball program would be playing in a Sweet 16 game tonight.

Despite a tough stretch to close the regular season, the Nittany Lions were primed for their first NCAA tournament appearance since 2011.

They peaked with a No. 9 ranking in the AP poll in mid-February, the highest in program history. That meant increased exposure for everyone in the program, from star senior Lamar Stevens all the way to the team managers, which included Devin Nowacki, a 2016 graduate of Warren Area High School.

“Personally, just for some context, I’ve gone three and a half years without anyone recognizing I’m a part of the program, and the last few weeks of the season I signed two autographs for kids who recognized me on the bench,” he said.

On March 12, the Nittany Lions were scheduled to take on Indiana in the Big Ten tournament. Obviously, that didn’t happen.

“When the news broke of the B1G tournament being canceled, all of the managers were texting each other like, ‘this can’t be real,’ and things of that nature,” Nowacki said. “Everyone was stunned. Once all of the conference tournaments were canceled, we all silently and unfortunately knew that the inevitable of no NCAA tournament was surely going to happen.”

Sure enough, it did later that day, as the United States has had to adjust to life without sports, a national staple that has taken a back seat to try to contain COVID-19.

The Nittany Lions ascended to 20-5, before a 1-5 stretch to close the regular season. That being said, they were a lock for the tournament, projected by most national media outlets as a five or six seed. Nowacki feels that getting on the road was exactly what the team needed.

“Obviously the last two weeks before this national pandemic was arguably the toughest stretch of the season, but you couldn’t tell inside the walls of the facility,” he said. “That started at the top and trickled all the way down to the managers. Everyone was just excited to finally be playing for something meaningful in deep February and into March.

“There was such a buzz all around campus and the town that we were going to make history and go on this deep run into the tournament. The final practices were extremely upbeat, full of competition and flat out hunger. I truly think a road trip was the best thing that was going to happen. You get to get away from all the local spotlight and recognition just for a little bit.”

Perhaps the toughest thing has been the team being away from each other. To have the type of season they were having, to not only have it taken away but to be away from many of your closest friends, is difficult.

“I have been quarantined in Warren since then, so I haven’t had much chance to talk to the players or coaches, but I know for a fact they are all heartbroken,” he said.

On a well-balanced team, Stevens was the unquestioned leader. He turned down a chance to go into the NBA draft after his junior season to be a part of something like this.

He appeared a short time after the tournament was canceled on SportsCenter with Scott Van Pelt, and spoke what the entire program was thinking and feeling.

“I think Lamar Stevens said it best with his tweet and interview with SVP,” Nowacki said.

“It was truly the best season in program history, and it got ripped from all of us. It is so hard to swallow, but there has to be a sense of pride from everyone in the program. Penn State basketball is on the map and hopefully staying for good!”

For Nowacki personally, being a part of the program has been time well spent, even if it did mean making some sacrifices.

He was a key player for the Dragons in high school for coach Jeff Berdine, and very much wanted to continue to have basketball be a part of his life beyond that.

“I can truly say it was the best thing I did in college and I’ve made lifelong friends through basketball,” he said. “I have sacrificed so much of being a ‘regular’ college student with an abundance of more responsibilities, but I do not regret it for one second. I know I’m still hurting from not being able to see my guys play in the postseason after all of the hard work that they have put in, I don’t know if I’ll ever get over it! But I’m still proud as hell to be apart of that program and I can’t wait to see what they do in the coming years.”