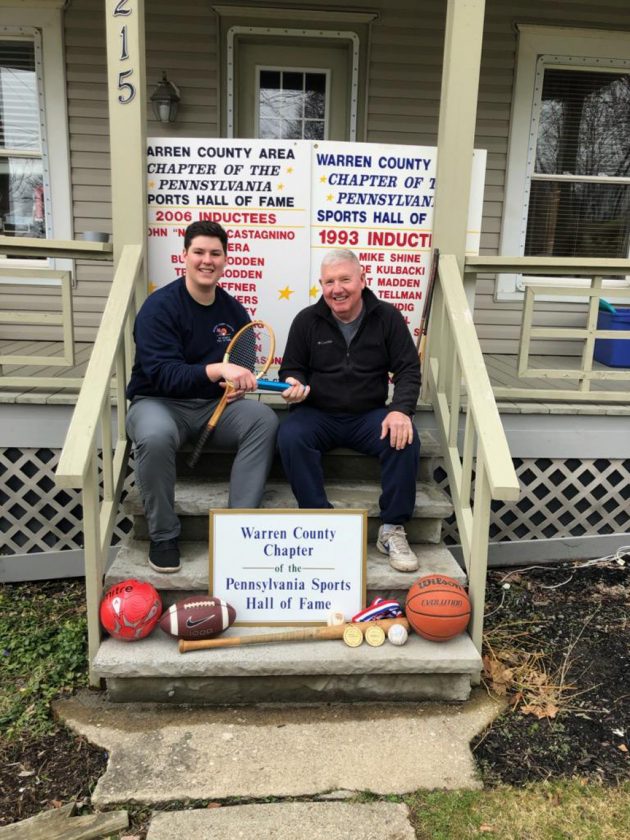 Jeff Bartsch (right), previous director of the Warren County Sports Hall of Fame, passes the baton to new director Nate Sandberg. Bartsch was Sandberg’s tennis coach at Warren Area High School. After a 10-year hiatus, the HOF is re-booting under the direction of Sandberg.

Nate Sandberg has a passion for sports.

The 23-year old and 2015 Warren Area High School graduate saw a void in Warren County and decided to take charge.

That’s why, after a 10-year absence, the Warren County Sports Hall of Fame is back, with Sandberg serving in the role of director.

“I have a lot of time and I wanted to get involved in the community,” he said. “I have a lot of pride in being from Warren County and I love sports, so I thought it made perfect sense to do it.”

Jeff Bartsch, who coached Sandberg to District 10 doubles (with brother Matt in 2013) and singles (2015) titles in tennis, served as the director from 2004-2010. He will continue to assist as a member of the Board of Directors. 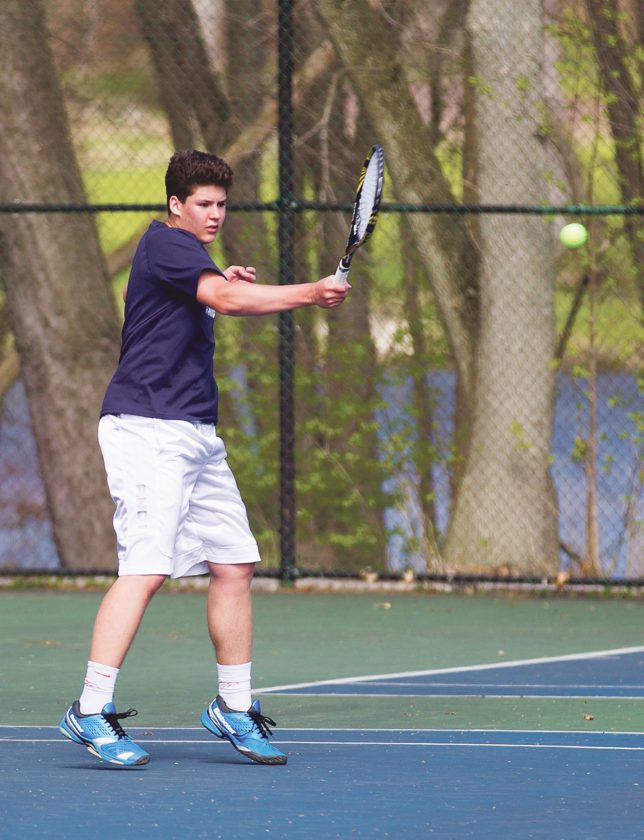 “We’re anticipating a lot of nominees because it’s been 10 years,” Sandberg said. “The quality will be very strong.”

It’s a big undertaking, but also one filled with plenty of anticipation and excitement.

“I’m really looking forward to working with the other board members,” he said. “We all have a passion for sports and are a close-knit group. I’m also looking forward to researching nominees and getting to call inductees and congratulate them. I think that will be a really cool moment.”

Here’s more in a Q&A with Sandberg about the Hall of Fame.

What is the Warren

The Warren County Chapter of the Pennsylvania Sports Hall of Fame is a not-for-profit organization that honors the accomplishments of athletes, coaches, sports organizers and promoters. We induct living nominees who are at least 30 years old who have an outstanding sports-related accomplishment. Deceased nominees need not meet the criterion. In order to be on the ballot, each nominee must have ‘roots in Warren.’

When did the Warren Sports Hall of Fame begin?

What do you expect for

Well with the Hall of Fame not having an induction class in 10 years, I expect the nominees to be very strong. Think about it. The newly eligible people would have been only 20 years old when the HOF had its last class. We have 10 years of no induction classes, so I am expecting not only a wide age range of nominees but a solid amount of quality and high-caliber nominees that the board will look at.

How will people even be aware that the HOF is

We have various platforms in which to broadcast information to the public. We have the Times Observer, the radio, and we even created a Facebook page. The Facebook page allowed me to instantly share the page with all of my Facebook friends. I was very excited to wake up the day after the page was created to see over 100 notifications on my phone!

Who is on the new Board of Directors?

The board of directors is fantastic. It includes myself, Jeff Bartsch (former director, HOF induction class of 2003), Andy Close, Jen Madril (HOF induction class of ), Bruce Williams, Dan Pellegrino, Tim Juliano, Buster Godden (HOF class of 2006), Jon Sitler, Tom Santo, and Corky Fry. There is a great span of diversity amongst us including our ages and our respective sports knowledge. What we all share in common is a love for sports, as well as sports history. I am really excited about our board members, and I know we will have a lot of fun with this.

Why did you want to start up the HOF after 10 years?

Back in high school when Jeff Bartsch was my tennis coach, he would mention the Hall of Fame. It has always intrigued me – that Warren County as a whole not only has/had fantastic athletes and coaches, but a rich history of sports. For example, who would have thought that back in the day that there was a semi-professional football team in Warren that played against the Green Bay Packers and Chicago Bears? Or even that Babe Ruth has played baseball on the old Russell Field? It’s things like these that make you not only appreciate sports history

Jeff Bartsch (right), previous director of the Warren County Sports Hall of Fame, passes the baton to new director Nate Sandberg. Bartsch was Sandberg’s tennis coach at Warren Area High School. After a 10-year hiatus, the HOF is re-booting under the direction of Sandberg.

How will you handle the HOF with the Coronavirus?

We will do what we can for now. It’s impossible to set up any sort of timeline for when things will happen. We are trying to, for now, get the ball rolling on this. Our goal, for now, is to let the public be aware that after a 10-year hiatus, the Warren County Sports Hall of Fame is back, and that we are very excited about it, and we hope the Warren County community is as well.