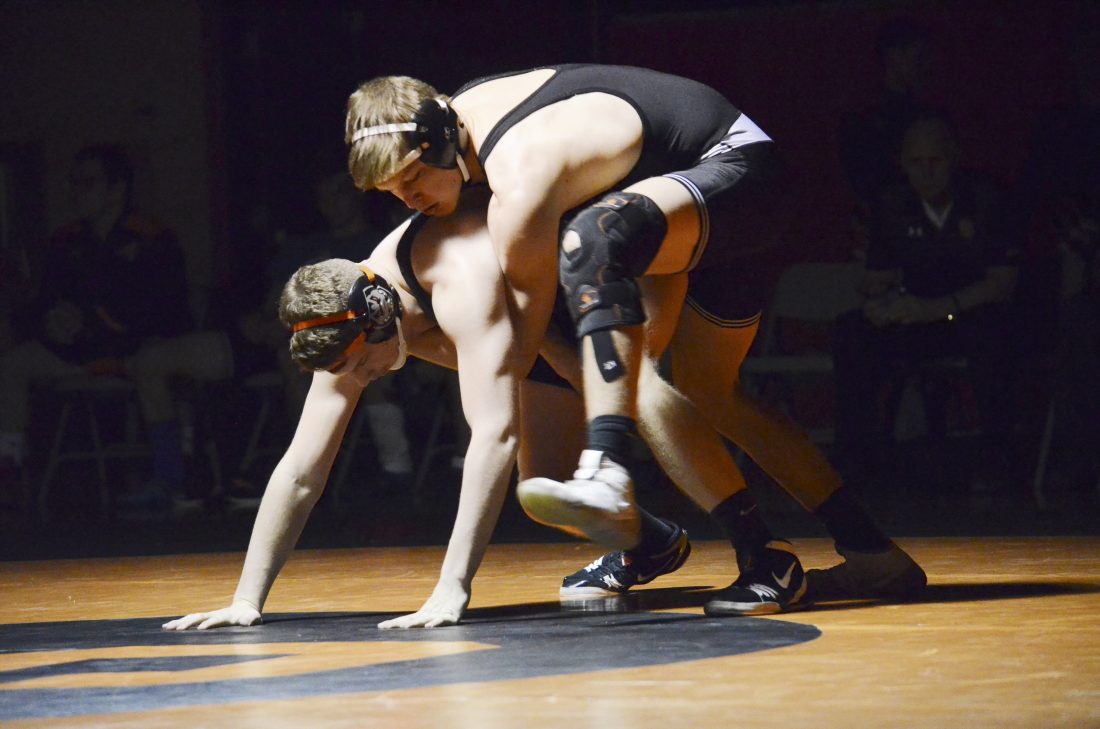 Ethan Finch and the Sheffield Wolverines embark on the District 9 championships.

A year ago, Sheffield’s Ethan Finch caught a lot of District 9 by surprise when he took home both the 170-pound D-9 title and the tournament’s Most Outstanding Wrestler award.

As the 4-seed, Finch knocked off the top seed in the semifinals and the No. 2 seed in the finals to take home the title. He’ll have everyone’s attention this year as he enters the 182-pound bracket as the top seed.

Six other Wolverines will enter as top-8 seeds and Sheffield will have 11 total wrestlers competing for a chance at a D9 title and a trip to the Northwest AA Regional Tournament.

The top four wrestlers in each weight class will advance to regionals.

Here’s a breakdown of each weight class.

Brown opens the tournament with a quarterfinal match against the No. 2 seed, Chase Weimer (17-4) of Port Allegany. Weimer earned a second period pinfall victory when the two met during a dual match last month.

Barnes has a quarterfinal match with Kane’s Isaak Johnson (17-10), the 5-seed. The winner will face Reinsel in the semifinals. Barnes picked up a 3-2 decision over Johnson during their dual meet match last month.

Gossert draws Kunselman in the first round, with the winner to take on Curwensville’s Caleb Stiles (8-12) in the quarterfinals.

Smead draws a bye into the quarterfinals where he awaits the winner of the first round match between Glasl and Coudersport’s Dalton Miller (8-18). Smead pinned Miller during their dual meet match in January. Glasl and Smead did not meet this season.

Marfink has a first round bye and will meet the winner between Wiant and Ridgway’s Armandt Rosario (7-16). Marfink was pinned by Wiant, but had an 11-7 decision over Rosario this year.

Mead gets a bye into the quarterfinals and will meet the winner of Wickett and Cameron County’s Luiz Patricio (7-12). Mead has not faced Wickett this season, but does hold a pinfall victory over Patricio.

Davidson has a first round match with Clarion’s Cutter Boggess (16-8) the 4-seed. Boggess picked up a first period pin when the two met earlier this month.

Peszlen takes on Clarion’s Donavan Edmonds (19-9), the No. 6 seed, in the first round with the winner to meet Johnsonburg’s Isaac Zimmerman (25-9), the 3-seed, in the quarterfinals. Edmonds holds a pinfall win over Peszlen this season.

Finch begins his D9 title defense with a first round match against Cameron County’s Connor Nolan (5-12). The winner moves on to face Coudersport’s Dylan Hajzus (12-17) in the quarterfinals.

Anderson meets the 3-seed, Port Allegany’s Justin Young (16-4) in the quarterfinals. The winner will take on the No. 2 seed, Cale Ayers (23-1) of Coudersport in the semifinals. Young and Anderson did not meet this season.

Campbell squares off with Ridgway’s Jacob Kunselman (21-7) in the first round with the winner to advance to a quarterfinal date with Brockway’s Gavin Thompson (20-10), the 3-seed. Kunselman holds a pinfall victory over Campbell this season.