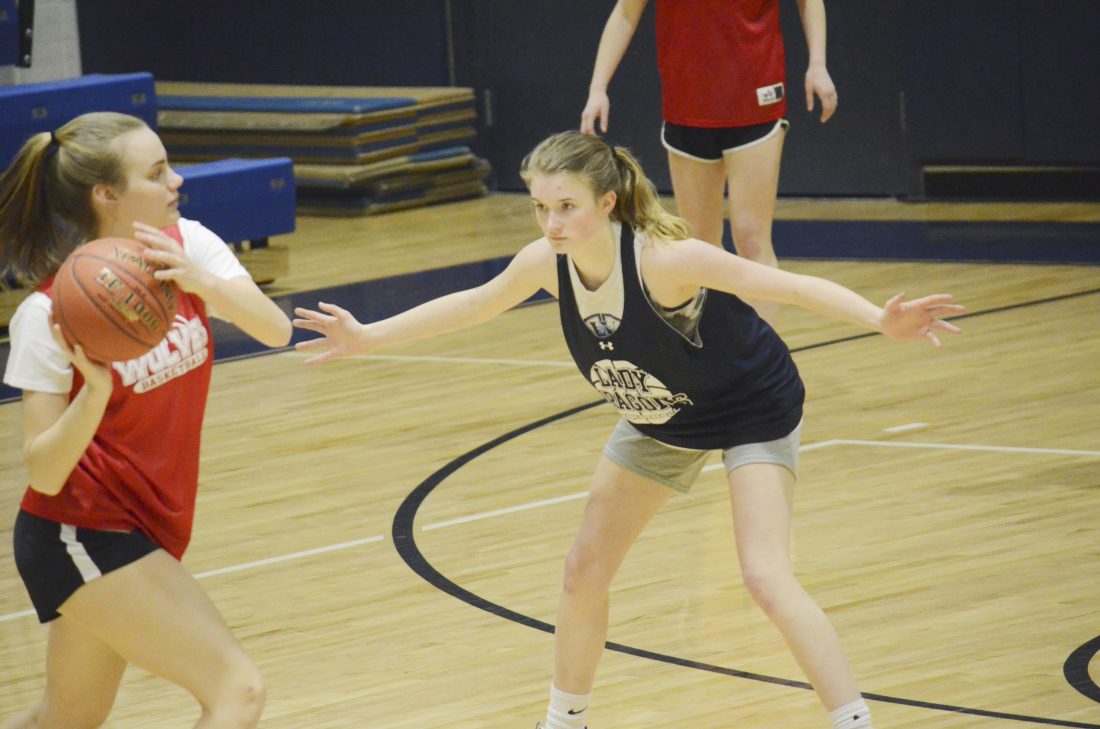 Times Observer photo by Andy Close Warren’s Gracie Ruhlman defends during a scrimmage against Kane on Tuesday, with Mercyhurst Prep also in attendance. The Lady Dragons begin their District 10 title defense today when they play Meadville in the Class 5A quarterfinals at the Hagerty Family Events Center (2:30 p.m.).

After nearly two weeks between games, the Warren Lady Dragons are set to begin their District 10 title defense.

After a 15-7 regular season, Warren will square off with Meadville in the Class 5A quarterfinals today at the Hagerty Family Events Center (2:30 p.m.)

“It’s been a while since we’ve had a play-in game. We’ve gotten used to it,” said Warren coach Lisa LaVan. “People complain all the time about it, and listen, I’d rather play sooner, but I’m not going to complain too much. Sometimes it’s good to have a little bit of a break and rest some bodies.”

Their opponent, Meadville, was the only team in the quarterfinals to have to play a play-in game, and they easily disposed of Franklin.

“A lot of people are saying ‘Oh you’ll be fine, you beat them by 20 the last time,'” said Warren sophomore Emma Ruhlman. “They have some good basketball players and are very athletic. The first time we played them we kind of let them stay around in the first half and took it to them in the second half. We just need to take it to them right from the start. This is the playoffs, you win or go home.”

They were key cogs in the run to the D-10 title last season, and have taken on even greater roles in Year 2.

“We ask a lot of them,” LaVan stated. “Emma, we ask her night in, night out to be a scorer and ask her to do that a lot outside of her comfort zone in the post. She’s a guard by trade. But when you’re 5-10, not much of a choice.

“Riley we ask to do the same thing and also to be a point guard and control the tempo of the game. Right there, that’s asking a lot of two kids. Not only to do what they do and do well, but I’m asking them to do more. I’m really proud of them. They love basketball. They spend their entire life forming into it and they’ll continue to do so. They have a lot of respect from there teammates for how hard they work and the amount of time they put into it.”

Taylor Childress, Riley’s older sister, is the lone senior on the team and a 3-year starter. As much as anyone, she exemplifies the toughness of this program that has become a staple.

“This is a group that works hard every single day they’re in the gym,” LaVan said. “They give me everything. That’s what’s made our program what it is. Taylor is a great example of that. She’s 100 pounds soaking wet and plays like she’s 250.”

Then there’s junior forward Teagan Paris, who has taken a big step forward this season.

“You can tell Teagan bales hay,” LaVan said “She’s a big, strong kid. She’s come around. The biggest thing with her is staying out of foul trouble. We’re a better team when she’s on the court.”

And then there’s a large freshman class, many of whom had to step into bigger roles perhaps sooner than their coach would have liked.

That being said, Gracie Ruhlman, Carly Beers, Ella Ordiway and Gracie Gatto have helped lead a group that has grown by leaps and bounds throughout the season.

“They got thrust into it real fast,” LaVan said. “They’ve really come along. Gracie and Carly both have done some great things. The class as a whole, Ella Ordiway, Gracie Gatto have really grown. They’re a fun group. They work hard and put in the time.”

“They’re athletic and they play very hard,” noted LaVan. “They start four seniors who know that it could be their last game. That part scares me. A very senior-laden team is always ready come playoff time. It’s going to be a battle. I know it’s a 1 vs. 4, but we don’t look at it that way. That region (Region 5) has been tough all year and Meadville is a good team.”

A win over Meadville started a run to their D-10 last season.

“I think that it was pretty wide open,” LaVan said of the 5A playoff field. “Slippery Rock is dangerous. Grove City is dangerous. Harbor Creek got us at the end of the year and they’re dangerous. And I still say the dark horses are Meadville and Hickory.”

And while they take it one game a time, the thought of returning back to that stage is something that’s in the back of their minds.

“It always is,” Ruhlman said. “At the beginning of the season, we had a talk with Riley and Taylor and Teagan and the returners. We talked with the freshmen and just said, that feeling we got winning a District 10 championship last year is something that you just can’t even describe. That’s in the back of our minds.

“It’s been a long season with a lot of tough games, a lot of tough practices. But one of the things that keeps us going is knowing we want to be holding that trophy again.”