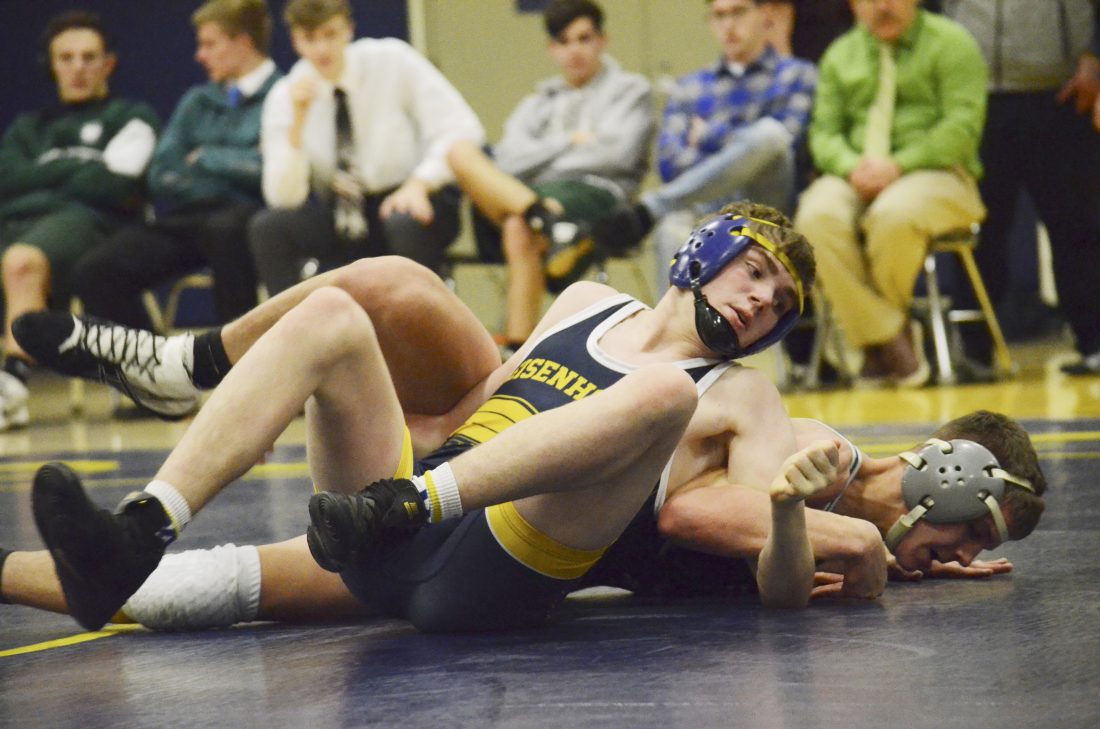 Gannon Jaquay and nine of his Eisenhower teammates are at Sharon for the District 10 Class 2A wrestling championships.

Tonight, they look to take the next step as the District 10 AA Tournament gets underway at Sharon High School.

Ten Eisenhower Knights and three Youngsville Eagles will gun for a district title, or top eight finish, to advance to regionals next weekend.

Eisenhower senior Logan Jaquay is the highest seeded county wrestler (No. 2 at 120 pounds) and comes in with a 32-0 record on the year. He has a chance, with three more victories this weekend, to tie DJ Fehlman’s Warren County record 135 career wins.

Fellow Knight Cael Black is the only other county grappler with a top four seed (No. 4 at 220 pounds). Gannon Jaquay is the 5-seed at 138, and Youngsville’s Jake DeSimone is No. 6 at 285.

DeSimone is looking to get back to regionals, as are Logan and Gannon Jaquay, Black and Josh Bortz (145).

Joining DeSimone from Youngsville are Collin Clough (138) and Sawyer Lawson (170).

Wrestling begins in Sharon at 5 p.m.

Here’s a look at each weight class

Rivera draws fellow freshman Kyle Lantz of Conneaut (21-8) in the first round. Rivera finished fourth in Section 1, while Lantz took fifth at Section 2. The two have not faced each other this season.

Jaquay’s quest for a second straight D-10 title begins with a first round bye. He’ll face the winner between Seneca’s Logan Platz (17-13) and Jamestown’s Chase McLaughlin (32-2). Jaquay decked Platz during the Tool City Tournament, he hasn’t faced McLaughlin since last year’s Regional Tournament. The two have met twice with McLaughlin winning 9-7 in the D-10 semis in 2018 and Jaquay picking up a 7-2 win in the Regional quarterfinals.

Williams has a first round bout with Reynolds junior Liam Foore (11-8). Williams and Foore, who finished fifth and fourth in their respective section tournaments, have never met on the mat.

Bortz takes on Sharon’s Nick Dignall (17-13) in the first round with the winner to face Chess in the quarterfinals. Bortz has faced neither Dignall nor Chess.

Hummel faces Titusville’s Jared Rogers (24-8) in the first round. The two have not met.

Lawson meets Greenville’s Cole Karpinski (30-4) in the first round. The winner will move on to the quarterfinals and a date with Laird.

Aiken will face Commodore Perry’s Domanic Leonard (21-10) in the first round with the winner to meet Corry’s Matt Petrilla (32-6), the 2-seed, in quarterfinals.

Black will meet Sharon’s Andrew Price (19-10) in the first round. This will be the first time the two square off.

Gourley takes on Greenville’s Brayden Difrischia (24-9) in the first round. On the other end of the bracket, DeSimone gets a first round match with Conneaut’s Isaiah Gilchrist (7-4).