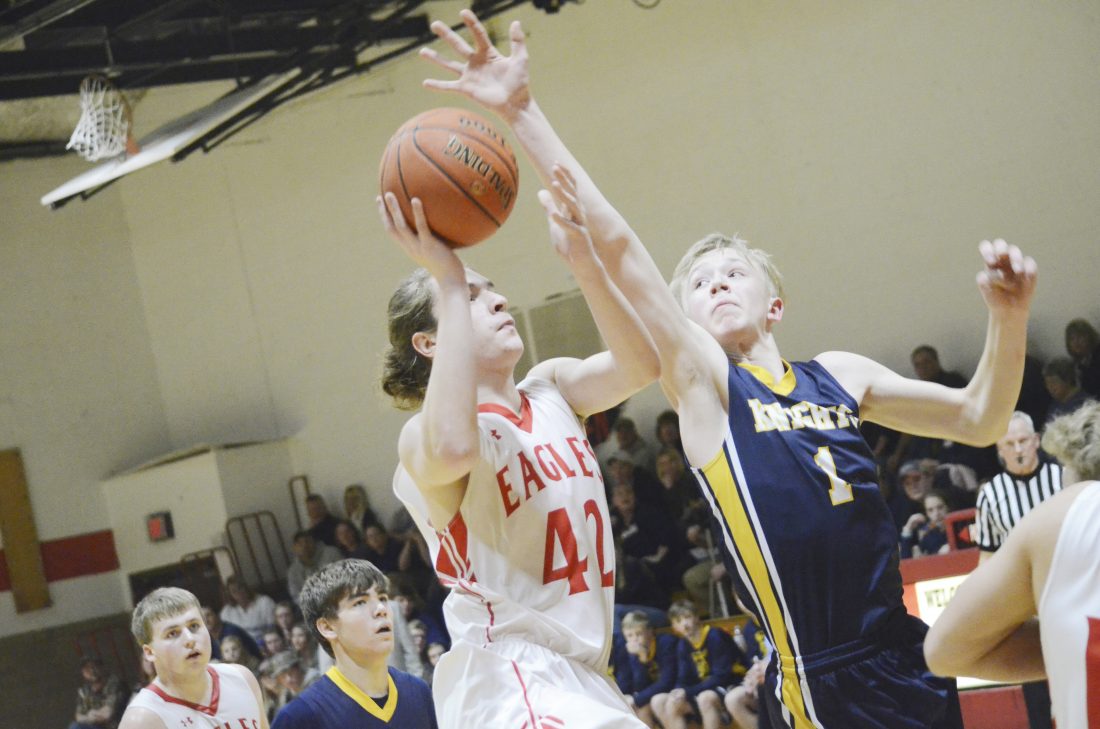 Youngsville’s Owen Procter has his shot challenged by Eisenhower’s Curt Darling during the second half of their game Tuesday, February, 11, 2020 at Youngsville High School. Procter and the Eagles game away with a 66-50 victory in the Backyard Brawl.

Two years ago, a 4-win Youngsville team took a playoff-bound Eisenhower squad to the brink on their home floor in its regular-season finale.

Flash forward to Tuesday night and many of those same Eagles who were either freshmen or sophomores at the time, were on the floor as they took care of business against the Knights, 66-50, polishing off win No. 17 – the most by the program in a quarter-century.

Hendrickson and fellow senior Owen Procter were honored before the game and Hendrickson was presented a ball commemorating his 1,000 career points, a milestone which he achieved last week in a road win over Union City.

“The guys were excited and really enjoyed the senior night,” DeLoof said. “It was really well done. Credit to the boosters on that.” 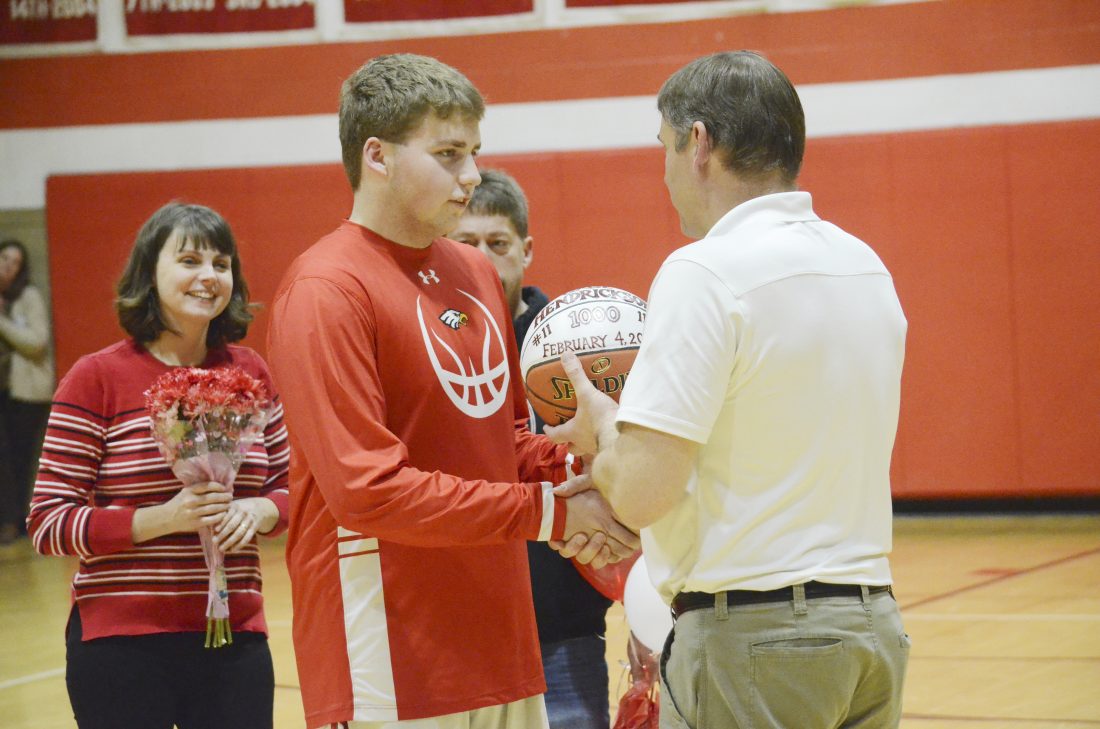 Youngsville’s Gage Hendrickson is presented with a ball honoring his 1,000-point milestone by assistant coach Dave Sherman before Tuesday’s game against Eisenhower.

Much like the Eagles did two years ago, the 6-win Knights came into this rivalry game ready to go.

They were hot from the outside to start, jumping out to a 14-10 lead after the first quarter. In all, they connected on 12 shots from distance.

“We started slow, ended slow, but did what it took to win,” noted DeLoof. “Credit to Eisenhower, they made shots, but with that being said, I don’t think we got out on their shooters the way we wanted to or the way we need to going forward.”

The Eagles began to find their offensive rhythm, as junior guard Joe Mack connected on back-to-back triples of his own, giving the Eagles (17-5) a 24-17 lead midway through the second quarter.

“I was just feeling it,” he said. “It’s a lot of fun (playing in front of big crowds). You get to see the town come out and support you and it feels good.” 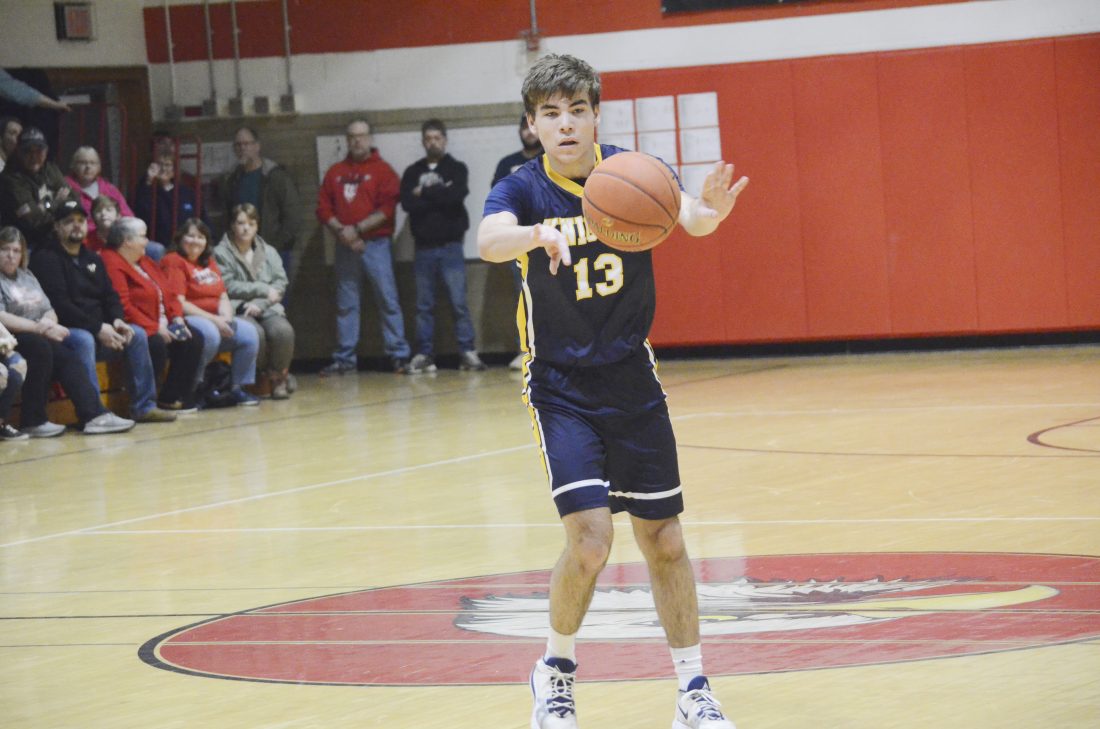 Eisenhower came storming back, as Curt Darling and Drew Williams knocked down 3’s to cut the margin back to 1, 26-26.

The Eagles responded with a 7-0 run to close the half on 3’s from Hendrickson and Brady Olewine.

The barrage continued to start the third quarter, as Williams hit a 3 and Luke Smelko had a putback to trim the margin to five, but the Eagles proceeded to go on a 16-5 run to blow the game open.

Olewine and Mack both made 3’s during the run and Procter connected on a jump shot.

The margin swelled to 20 in the fourth quarter, but the Knights, who played just five players for the entire 32 minutes, never quit, and got it back down to 10 before the Eagles put them away. 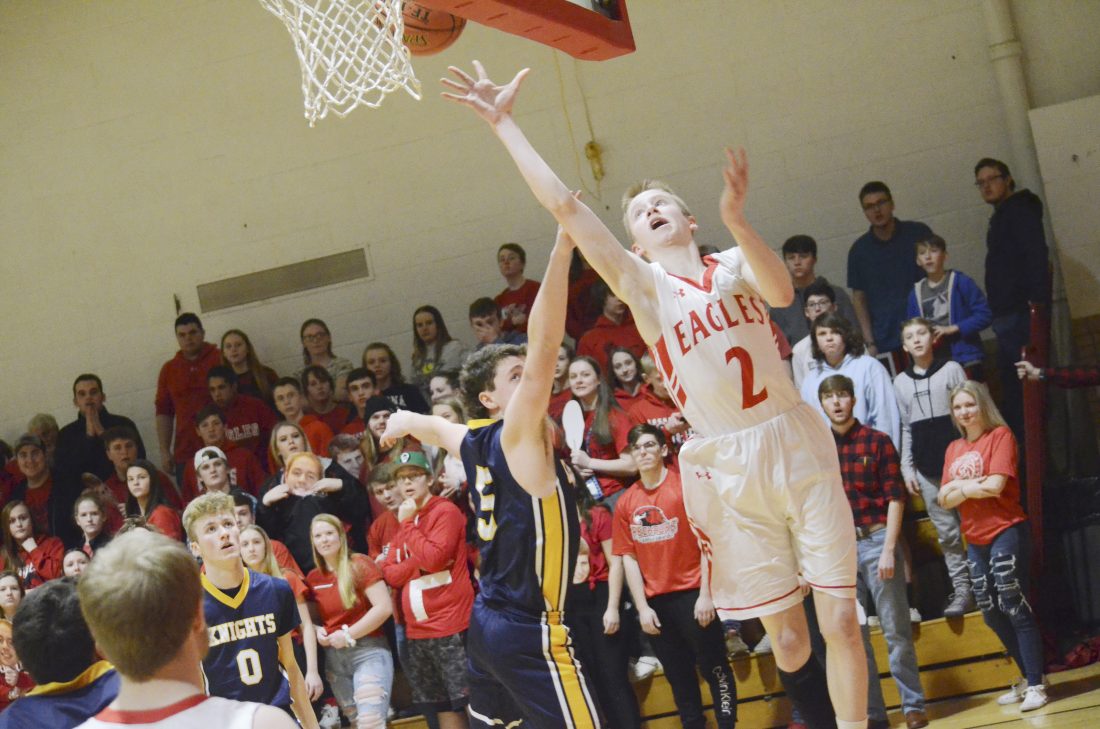 Hendrickson led three Youngsville players in double figures with 17 points, while Mack had 16 and Olewine 15.

“I thought we started slow but were able to adjust,” DeLoof added.

Youngsville also won the JV game, 56-37. Dominic Dell had 17 points, Xavier Mowrey 14 and Koby Hendrickson 11 for the Eagles, while Kael Hunt had 17 to pace the Knights.

Looking ahead, the District 10 playoff brackets are slated to be released Wednesday morning, and it is expected that the Eagles will host Mercer on Friday in the Class 2A first round at 7 p.m.

“There’s been a lot of firsts this year,” DeLoof said. “But we can’t take it for granted. We need to be ready to play and take care of the first practice, the first playoff game as it comes. That’s how we’ve done things all year. One practice at a time, one game at a time.”

The Elkers (16-6) outscored the Wolverines 28-10 in the second quarter to take control.