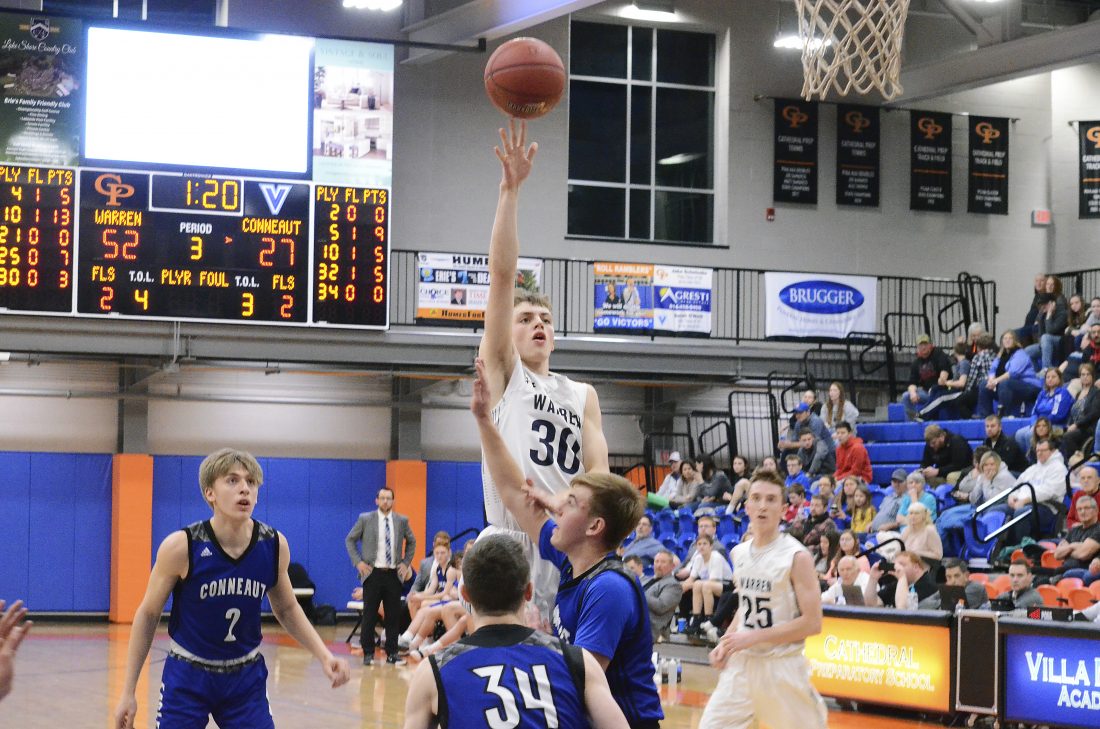 Warren's Payton Barnes (30) puts up a shot over Conneaut's Eli Boyce (10) and Zachary Walker (34) during the third quarter of their District 10 Class 4A quarterfinal game at the Hagerty Family Events Center, Thursday, Feb. 20, 2020. The Dragons topped the Eagles, 68-42, and advanced to a semifinal round matchup with Hickory Tuesday at a time and location to be determined.

It’s hard to be more impressive than the Warren Dragons were in their 68-42 drubbing of Conneaut in the District 10 quarterfinals last week.

The task in the semifinals gets exponentially more difficult, however.

The Dragons (15-8) will square off with the Hickory Hornets (19-4) at 7:30 p.m. tonight at Oil City High School, with the winner to face either Harbor Creek or Slippery Rock and the loser left to fight for the remaining spot in the Class 4A state playoff field.

Hickory comes in the No. 3 ranked Class 4A team in the state. Their resume is an impressive one.

The Hornets beat Grove City for the District 10 title a year ago and advanced to the PIAA semifinals before being knocked out by eventual state champion Imhotep Charter. Of their four losses this season, none have come to District 10 opponents.

“We know what’s in front of us,” Warren coach Jeff Berdine said following the win over Conneaut. “We think we can play with anybody. This team is used to showing up and playing.”

They are led by the duo of Donald Whitehead and forward Peyton Mele.

Whitehead, a 5-11 all-state senior guard, is the engine for a Hornets attack that has averaged 69 points per game this season. He checks in at 20.4 points per game and can do it all, whether that’s hitting from the outside or creating his own shot.

“We’ve seen some good guards this year, but I don’t think we’ve seen anything like him in terms of his ability to create shots,” Berdine said.

Mele, a 6-2 junior and son of head coach Chris Mele, just surpassed the 1,000-point mark in the Hornets’ 70-53 quarterfinal win over Titusville. Whitehead finished with 27 against the Rockets, with no other Hornet scoring more than five points.

“He’s as good of a shooter as we’ve seen,” Berdine noted. “You put those two together … we have to make sure we get a hand in their face and try and limit their production.”

Hickory did welcome back 6-7 senior Isaiah Jarzab last week. Jarzab, a Mercyhurst University commit, missed the entire season with an injury. He wasn’t much of a factor against Titusville, but his mere presence is a boost.

“I expect to see him a little more with a few more practices under his belt,” Berdine said.

The Hornets’ quarterfinal story was a little different than the Dragons. They faced an early deficit against Titusville and trailed at the half, only to go on a 17-0 third-quarter run to assume control of the game. Of Titusville’s five third-quarter points, all of them came from the free-throw line.

The Hornets will press, and press often.

“That will be the key for us. We have to keep them out of an extended run,” Berdine said. “When they press us, we have to get buckets. We can’t not get shots.”

A strong start will once again be crucial for the Dragons. Forwards Tom Bablak (11.3 ppg.) and Ben Berdine (15.0 ppg.), Warren’s top two scorers this season, led the way against Conneaut with 15 and 14 points, respectively.

Truthfully, however, it was a balanced attack. Payton Barnes (10.3 ppg.) does a little bit of everything for the Dragons, and did so again in the quarterfinal win despite just scoring five points. Guards Mitch Grosch and Ryan Arnold are excellent on-ball defenders, and the task of defending Whitehead will go to them, as well as Ryan Rafalski and Tyler Gustafson.

Senior forward Drew Swanson has become an x-factor for the Dragons, and he’ll be counted on, along with Berdine and Bablak, to contend with a big Hickory frontcourt.

They know the task ahead of them is a tall one, but they aren’t backing away from it. In fact, they are embracing it.

“We know we’re the underdog,” said Bablak after the win over Conneaut. “They’re one of the best teams in the state. To potentially knock them off and come out with a win …” 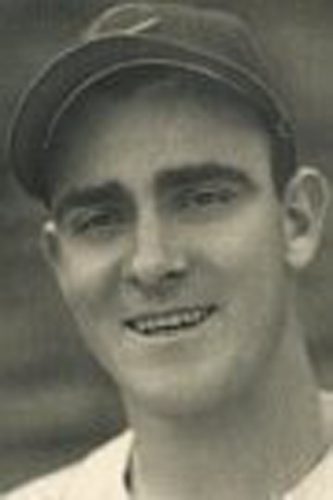 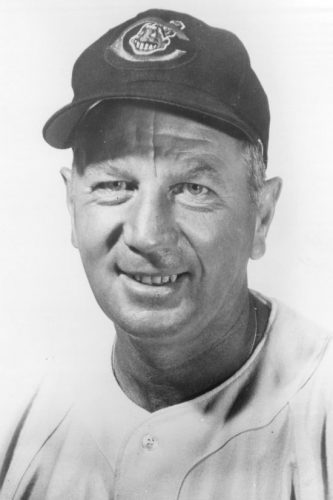 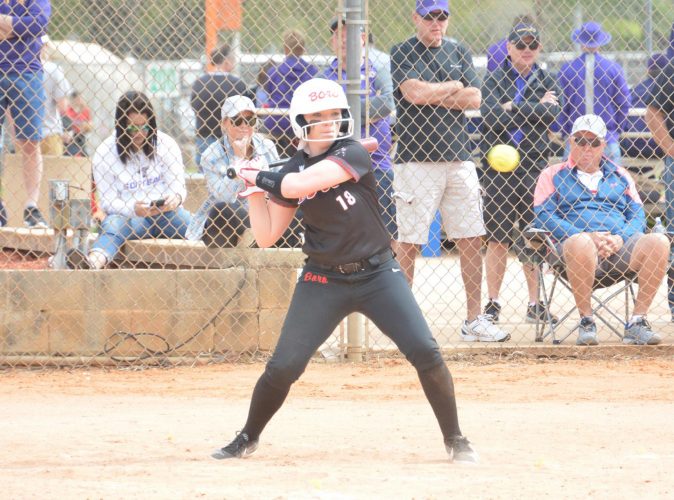