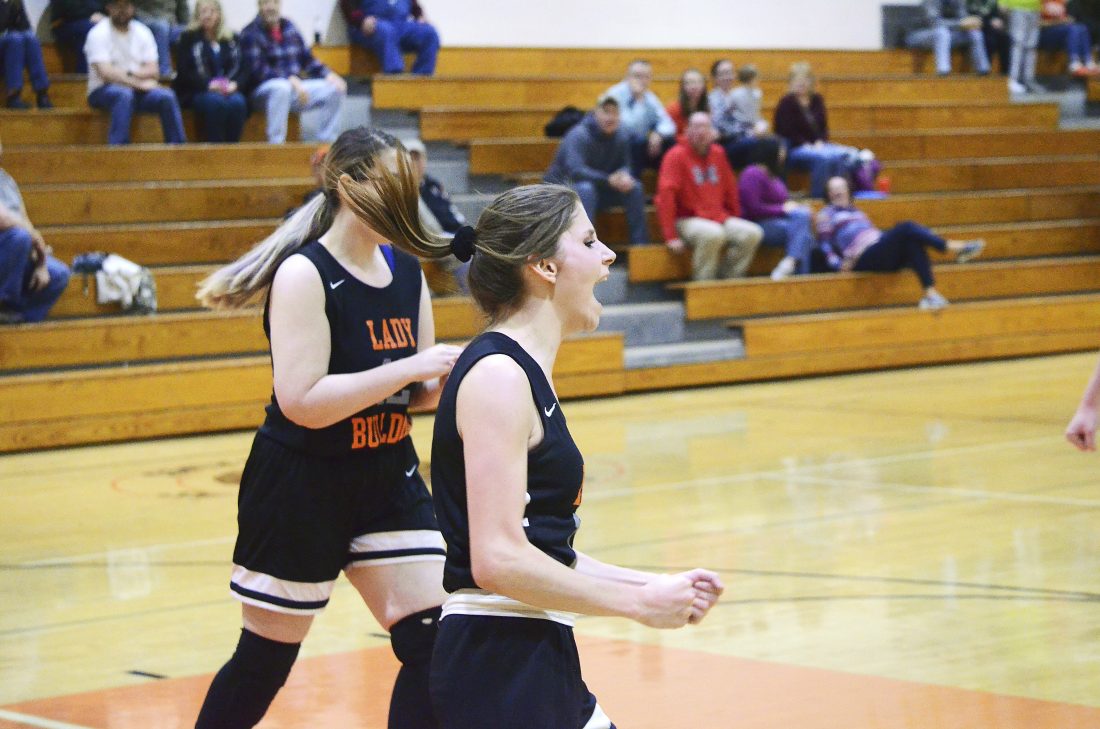 Times Observer photo by Brian Hagberg Tidioute senior Nakiesha Krouse celebrates after putting in a layup with a chance for a 3-point play late in the fourth quarter of a game against Sheffield at Sheffield High School, Wednesday, Feb. 5, 2020. Krouse finished with 17 points and seven steals, and went 4-4 from the free throw line in the final 13 seconds to send the Bulldogs to a 41-36 win over the Wolverines.

Though she didn’t shoot particularly well from the field in the second half, Tidioute’s Nakiesha Krouse wanted the ball in her hands knowing Sheffield was going to foul in the waning seconds of Wednesday’s game at the Ralph J. Santo Gymnasium.

She got it and went 4-4 from the free throw line in the final 13 seconds to propel the Bulldogs to a 41-36 win over the Wolverines.

“Foul shots win games,” TCCS coach Christy Valentine said. “We knew we wanted her on the line to end it. We played smart at the end of the game.”

Tidioute (5-14) looked poised to put the game away midway through the third quarter. The Bulldogs stretched their 3-point halftime advantage to a 22-14 lead after Kelsey Nuttall’s 3-pointer just 1:24 into the half. The teams traded buckets over the next four minutes until Angelina Sabella’s field goal put Tidioute up 28-21 with 2:07 to play in the frame. 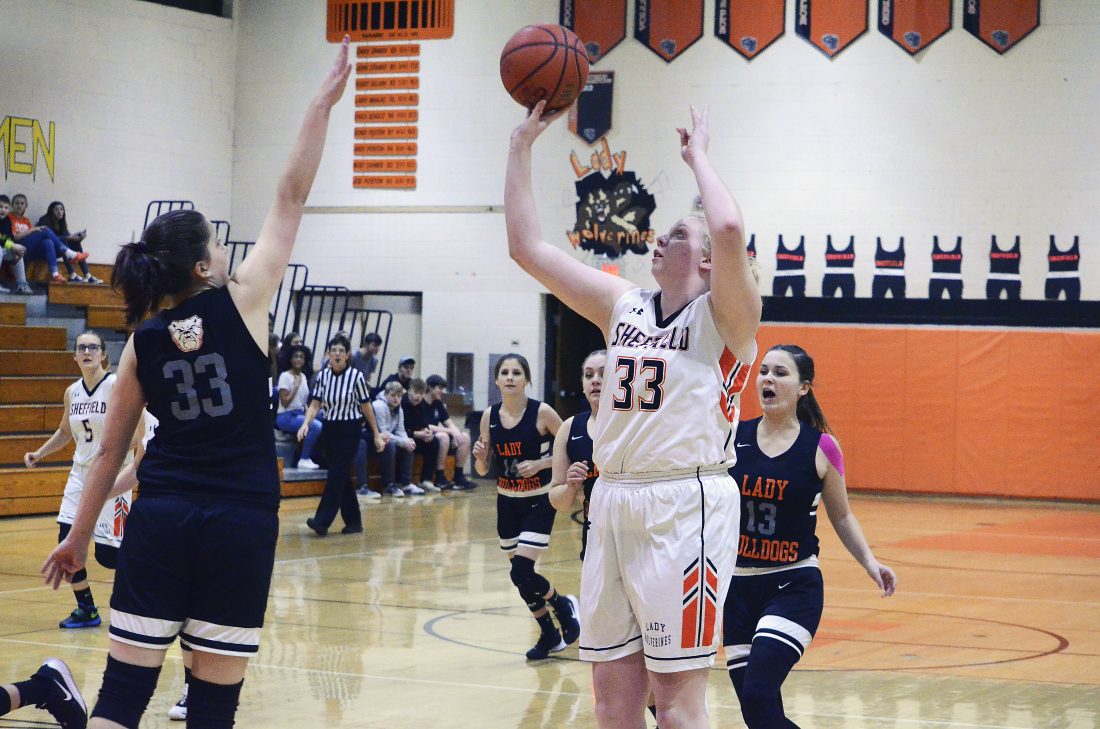 Times Observer photo by Brian Hagberg Sheffield’s Ashley Frederick (right) puts up a shot over the outstretched arm of Tidioute’s Lexis Drukenbrod (left) during the first quarter of their game at Sheffield High School, Wednesday, Feb. 5, 2020. Frederick finished with a double-double, 10 points and 23 rebounds, but Drukenbrod and the Bulldogs came away with the 41-36 victory.

Suddenly, the Bulldogs went ice cold from the field while the Wolverines (2-17) started heating up.

Alyssa Dunham made a free throw, then completed a 3-point play to cut the lead to three with 49 seconds left in the quarter. Ashley Frederick put back an offensive rebound to make it 28-27 heading to the fourth.

“We switched to a 4-1 and did a good job coming out on the shooters,” Sheffield coach Tony Richards said.

Dunham hit a short jumper 30 seconds into the fourth quarter to give the Wolverines their first lead since being up 4-2 with 2:50 to go in the first quarter. It was the first of six lead changes over the final eight minutes.

“It was nice to play a team where the game could go either way,” Valentine said. “In the end, it came down to who wanted it more.” 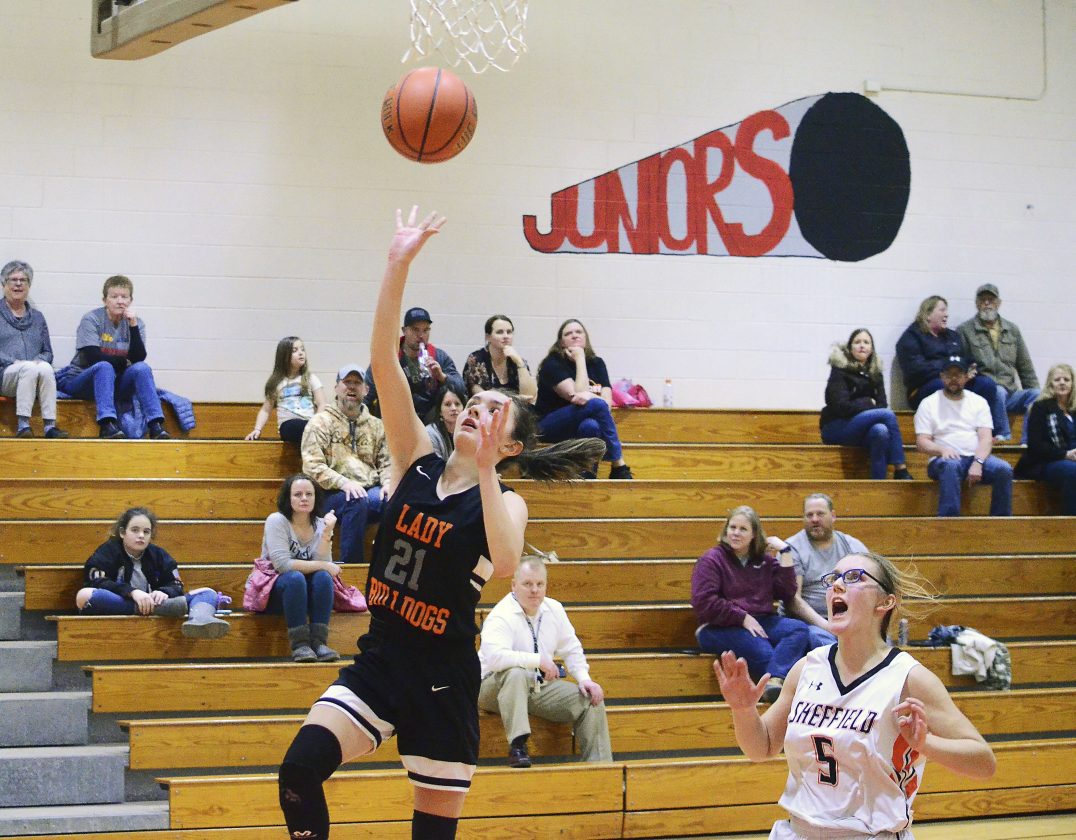 Times Observer photo by Brian Hagberg Tidioute’s Angelina Sabella (21) puts in a layup in front of Sheffield’s Lily Lauffenberger (5) during the fourth quarter of their game at Sheffield High School, Wednesday, Feb. 5, 2020. Sabella finished just shy of a triple-double with 12 points, eight rebounds and eight steals, as the Bulldogs topped the Wolverines, 41-36.

Sabella put in a layup with 5:07 to go to retake the lead, but Marissa Grubbs knocked down a pair of free throws just 30 seconds later to put Sheffield back on top. Sabella answered a minute later, but Frederick needed just 15 seconds to swing the momentum back to the Wolverines.

Krouse was fouled with the Bulldogs trailing, 34-33, and just under two minutes to go. She knocked down both free throws to give Tidioute the lead for good. Her steal and transition layup with 1:32 left made it 37-34. Dunham got Sheffield back to within one with 1:12 to play. Then the game turned into a free throw shooting contest.

The teams went a combined 0-7 from the line over the 59 seconds of play.

“It’s not often we have people chanting ‘over-rated’ at us,” Valentine said.

Dunham had a game-high 18 points. Frederick had a double-double with 10 points and 23 rebounds.

“She was big on the boards,” Richards said.

Sheffield, minus two key players Wednesday, is hopeful to be at full strength when the Wolverines travel to Curwensville Friday.

“Take nothing away from Tidioute,” Richards said. “We’re not making excuses. Not having Lexi Goldthewaite was a big loss on defense.”

The Bulldogs are back in action tonight when they host Iroquois for Senior Night.