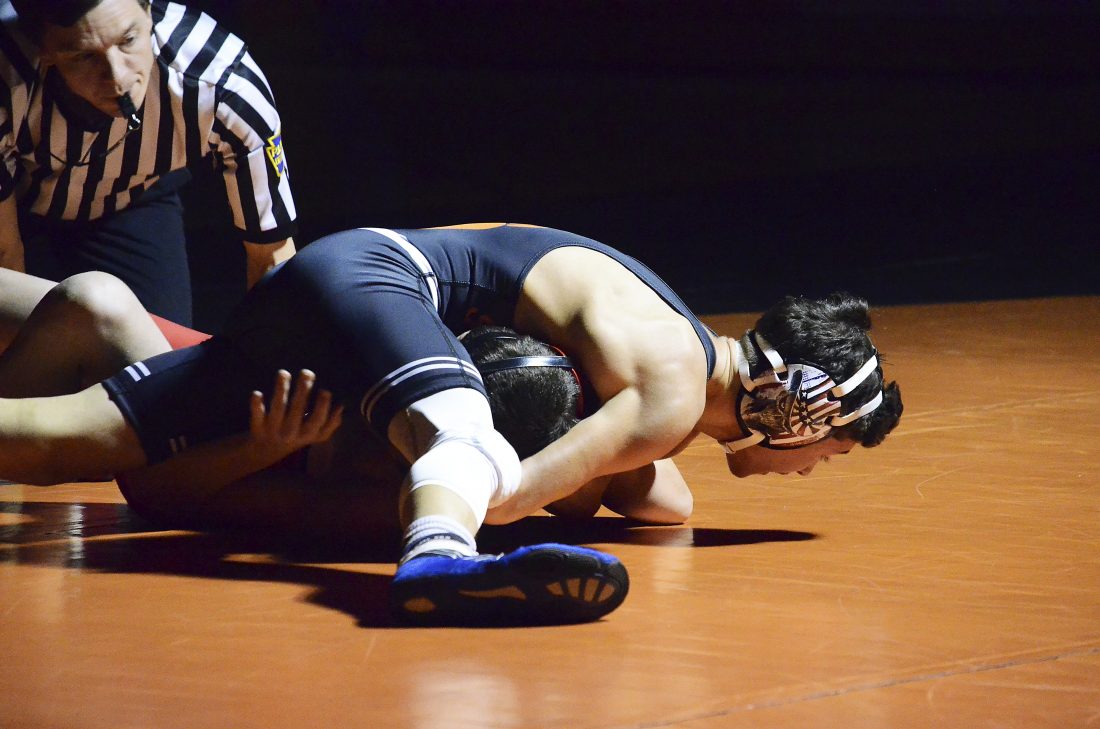 Times Observer photo by Brian Hagberg Sheffield’s AJ Barnes locks down Bradford’s Quinn Lasher for a pinning combination during the first period of their 113-pound match at Sheffield High School, Tuesday, Jan. 21, 2020. Barnes’ pin was one of three straight to open the match for the Wolverines, and they picked up six total pinfalls, on their way to a 54-30 win over the Owls.

Sheffield picked up six pins and three forfeits on its way to a 54-30 win over Bradford Tuesday.

The Wolverines began the match with three straight pinfall wins and rolled off another three straight near the end of the match to secure the team victory. Every contested match was decided via pinfall.

“We preach bonus points,” Sheffield coach Jack Rice said. “They were getting 6s, so we had to get more 6s to win. This was a real big win for us.”

Collin Brown got things started for Sheffield with a comeback win over Devan Poe at 106. Trailing 9-3 in the third, Brown got a reversal and nearfall to close the gap to 9-8, then cinched Poe’s arms to pick up the pin.

“He fell behind 6-0 and fought his way back,” Rice said. “Then he ended up pinning the kid and that was a huge fall to start things off.” 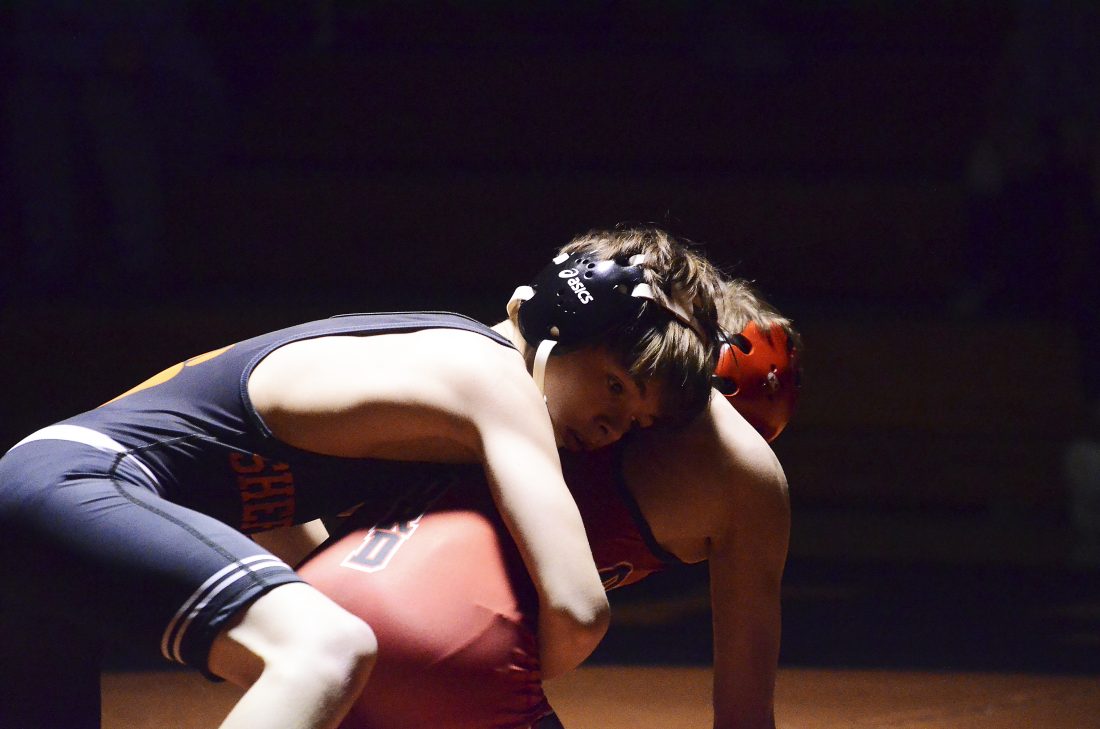 Times Observer photo by Brian Hagberg Sheffield’s Collin Brown listens for the whistle on a restart during his 106-pound match against Bradford’s Devan Poe at Sheffield High School, Tuesday, Jan. 21, 2020. Brown picked up a pin as the Wolverines topped the Owls, 54-30.

AJ Barnes made quick work of Quinn Lasher at 113 and Marco Avalos decked Jacob Lucco midway through the second period at 120 to put Sheffield on top, 18-0.

“A lot of guys stepped up,” Rice said. “This was a collective effort as a team, but my lightweights started off nice for us. Barnes and Avalos got two quick pins and that really set things in motion for us tonight.”

Lucas Laktash got the Owls on the board with a first period pin of Chris Gossert at 126. The teams then traded forfeits. Caden Smead won for Sheffield at 132, while Brett Thompson did likewise for Bradford at 138 to cut Sheffield’s lead to 24-12.

Drake Hayden closed the gap even more with a late first period pin over Cooper Traister. The official’s hand hit the mat with just one second remaining in the period and the Owls were within six, 24-18.

Two more forfeits, to Kevin Marfink at 152 and Landon Mead at 160, gave the Wolverines some breathing room.

For the second time in the match, a Bradford wrestler secured the pin with one second left in the first period. This time, it was Derek Sunafrank getting the fall over Todd Peszlen at 170.

“Inexperience cost them the match there,” Rice said. “They just don’t have that mat sense yet.”

The next three wrestlers, all bumped up a weight class, secured the dual match victory.

Jake Davidson decked Michael Bow midway through the second period at 182. Ethan Finch picked up a 39 second win over Dawson Smith at 195 and Casey Anderson needed just over a minute to notch his first career victory, a pinfall over Andrew Kranz at 220.

“We were trying to fill some spots to get the win,” Rice said. “Traister bumped up and we filled the forfeits. We bumped Davidson and he came out with a huge pin. Anderson got his first varsity win tonight. There were a lot of good things. I was very pleased. We had a lot of high energy.”

The Wolverines will hope to carry that energy into Grove City over the weekend for the annual Fred Bell Tournament. Wrestling begins at noon Friday.