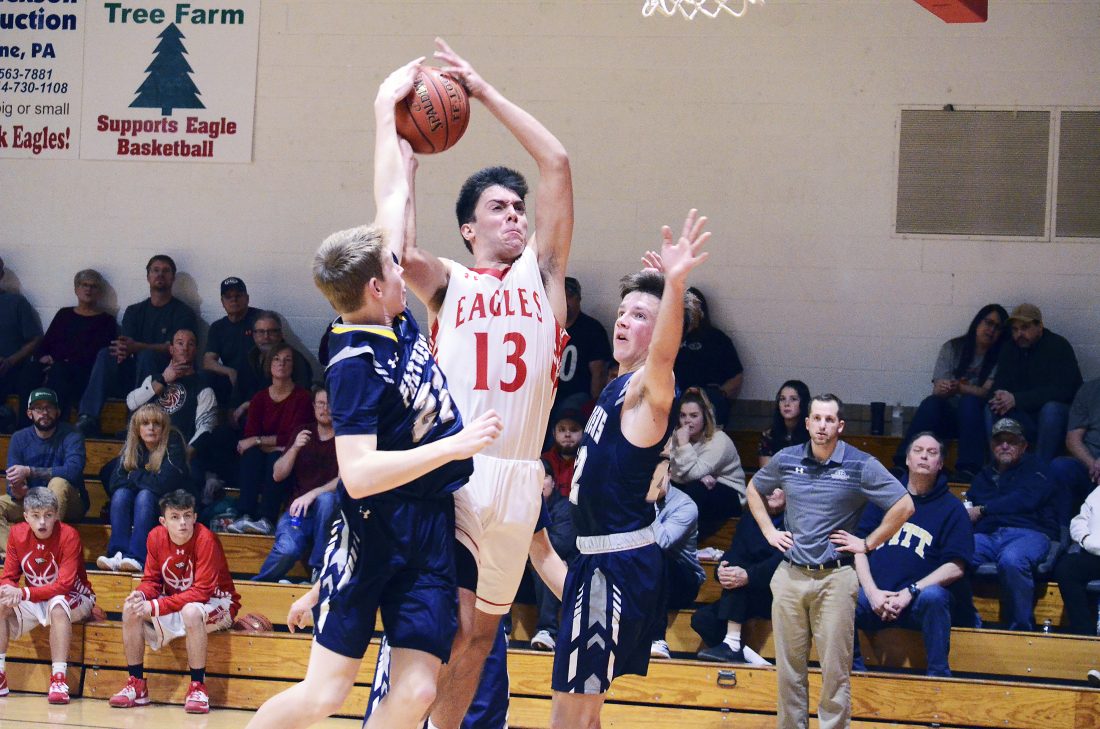 Youngsville’s Timber Bower (13) muscles his way in for a layup over Saegertown’s Henry Shaffer (21) and Max Fuller (22) during the third quarter of their Region 3 game at Youngsville High School, Tuesday, Jan. 14, 2020. Bower finished with a career-high 22 points to help lead the Eagles to a 60-47 win over the Panthers.

A 13-0 third-quarter run gave Youngsville the cushion it needed to stave off a feisty Saegertown team and come away with a 60-47 Region 3 win Tuesday.

Timber Bower accounted for six of the Eagles’ 13 points in the run with strong drives to the hoop on three straight possessions. The win, Youngsville’s eighth straight, gave the Eagles 11 on the season, tying the mark from last year’s playoff team.

Saegertown (5-6 overall, 1-4 Region 3) trimmed a 9-point halftime deficit down to three, 30-27, less than two minutes into the third. Gage Hendrickson started Youngsville’s (11-3, 4-1) run with a layup and Austin Peterson followed with a reverse layup a minute later. With just over two minutes left in the period, Bower went to work. He set up in the corner, where he had already knocked down a 3-pointer, and drove the lane as the defender came out to guard against the long-range shot. Three possessions, three layups and a little flex had the Eagles back in control.

“I think we had been settling for the threes a little before that (sequence),” DeLoof said. “Timber understood we needed some paint points. He’s feeling comfortable on the offensive end of the floor.” 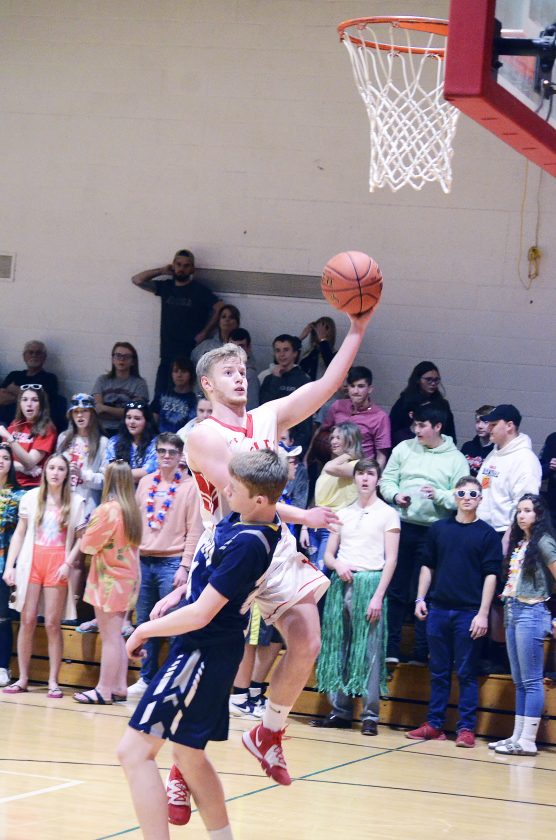 Youngsville’s Joe Mack (5) drives past Saegertown’s Henry Shaffer (21) for a basket during the second quarter of their Region 3 game at Youngsville High School, Tuesday, Jan. 14, 2020. Mack and the Eagles topped the Panthers, 60-47.

Hendrickson completed a 3-point play with eight seconds to play, but Saegertown’s Zach Yoder hit a three at the buzzer to end the run.

Hendrickson knocked down a 3-pointer and Bower drained a pair of free throws to push the Eagles’ lead to 19, 54-35, midway through the fourth quarter. The Panthers clawed their way back in it, thanks in large part to second-chance

Warren’s Tyler Gustafson pulls up for a jumper late in the third quarter of Tuesday’s Region 6 battle against Fort LeBoeuf. Gustafson drained the shot, part of a 13-1 Warren run that helped them to the 55-48 victory.

Youngsville’s Joe Mack (5) drives past Saegertown’s Henry Shaffer (21) for a basket during the second quarter of their Region 3 game at Youngsville High School, Tuesday, Jan. 14, 2020. Mack and the Eagles topped the Panthers, 60-47.

Youngsville’s Timber Bower (13) muscles his way in for a layup over Saegertown’s Henry Shaffer (21) and Max Fuller (22) during the third quarter of their Region 3 game at Youngsville High School, Tuesday, Jan. 14, 2020. Bower finished with a career-high 22 points to help lead the Eagles to a 60-47 win over the Panthers.

Sheffield’s Danah Campbell puts Port Allegany’s Hunter Tanner on his back during their 285-pound match on Tuesday at Sheffield High School.

The Flannel Panel cheers on the Dragons.

opportunities that led to three 3-pointers and a field goal. Youngsville was able to hit just enough free throws down the stretch to hold Saegertown at bay and secure the win.

“We were awful on the glass tonight,” DeLoof said. “It was just a lack of focus, a lack of toughness. To get to where we want to go, we have to be better closing down the stretch.”

The teams battled back-and-forth to start the game. Bower completed a 3-point play to give Youngsville an early advantage, but Saegertown got the next four points to take the lead, 8-7. Hendrickson hit a 3-pointer and went 1-2 from the line to make it 11-8. Following a Panthers field goal, Hendrickson hit a pair of free throws to push the lead to 13-10 with 34 seconds left in the first. Bower drained his first three of the game with two seconds to go to give the Eagles a 16-10 lead after one.

Bower picked up right where he left off, opening the second quarter with a 3-pointer to extend the lead to nine. The first four minutes of the frame belonged to the Eagles as they pushed the advantage to 25-16. The Panthers answered back and trimmed the deficit to 25-21 with 33 seconds left in the half.

“Credit to them, they competed for 32 minutes,” DeLoof said. “They’re a young team. Basically, they’re where we were 18 months ago.”

Peterson hit a layup with 19 seconds to go the Eagles got the ball to Bower for a deep three just before the buzzer to take a 30-21 lead into the locker room.

“We had the advantage physically,” DeLoof said. “But we need to be much better on the glass. We weren’t taking that aggressive first step.”

“Our goal was to keep (Fuller) uner 13 points,” DeLoof said.

Bower finished with a game- and career-high 22 points. Hendrickson added 20 in the win.

Youngsville travels to rival Eisenhower on Friday for the latest installment of the Backyard Brawl.

Lance Welker had a game-high 19 points to lead the Blue Devils, while Trent Wheeler and Nathan Held scored eight each.

Jared Martone led the way for the Knights with 13 points. Drew Williams had eight and Wyatt Lookenhouse seven.

The visiting Wolverines raced out to a 22-2 lead and never looked back en route to a 66-22 win over the Bulldogs. Tyler Hepinger, Tony Richards and Jake Vinopal all reached double figures scoring with 19, 11 and 15 points, respectively.

Vinopal also pulled down eight rebounds in the win, while Connor Johnson had five assists. 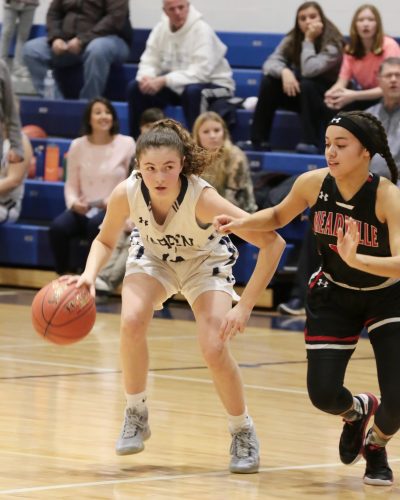 Warren and General McLane traded body blows for 32 minutes on Friday, a style of play that has defined an ... 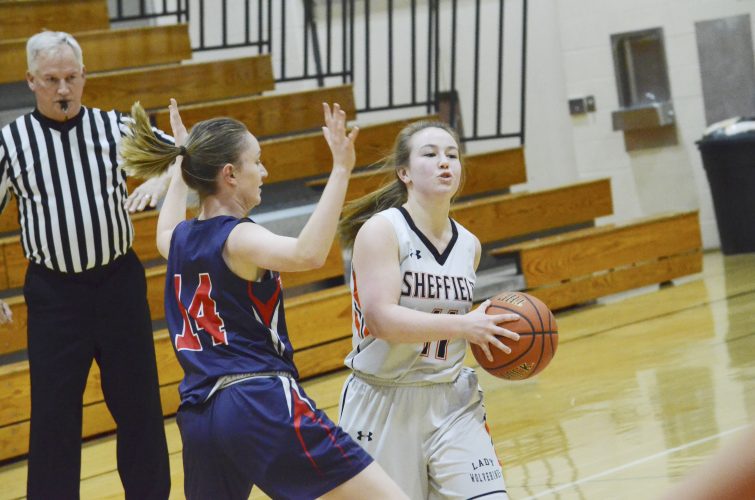 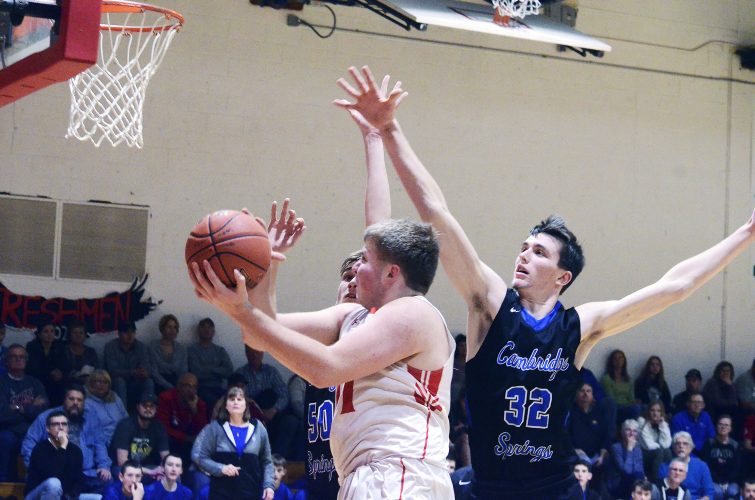 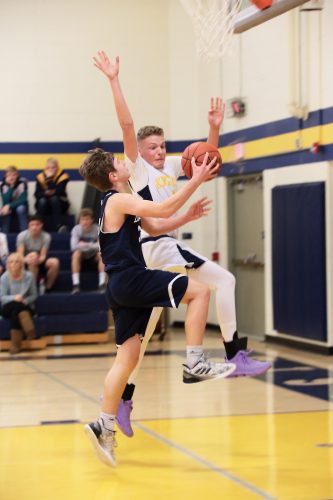