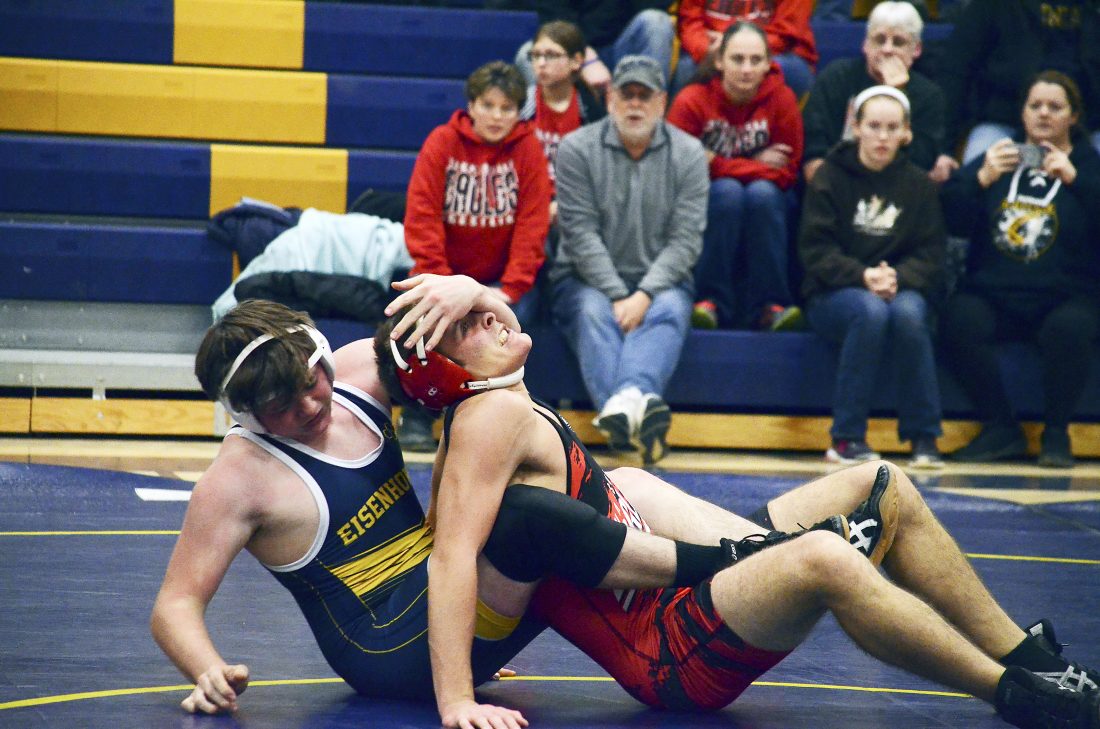 Eisenhower’s Steven Reilly tries to pull Youngsville’s Damon Reese down to the mat during their 170-pound match at Eisenhower High School, Wednesday, Dec. 11, 2019. Reilly came away with a 10-5 decision over his former teammate and the Knights took down the Eagles, 75-6.

With two weight classes left to wrestle in Wednesday’s tilt between Youngsville and Eisenhower, the only question about the outcome was whether the hosts would win every contested match via pinfall.

The Knights won all eight contested bouts, seven by fall, en route to a 75-6 win over the Eagles at the John M. Niese gymnasium. Eisenhower picked up five more wins via forfeit. Jake DeSimone got the Eagles’ only win via forfeit at 285.

“I thought we were aggressive,” Eisenhower coach Kris Black said. “I saw some positives, but we’ve got a lot to work on too. Seeing someone in a different color singlet gives you a different look (from practice) and allows you to see your strengths and weaknesses.”

In a dual that didn’t see a lot in the way of drama, only three matches went beyond the first period, two contests stood out.

Youngsville’s Collin Clough and Eisenhower’s Alex Hummel nearly went the distance in their bout at 138 pounds. Clough had a big takedown late in the first period, but Hummel got the point because the move was ruled a slam. That was the only point scored through the first two minutes. 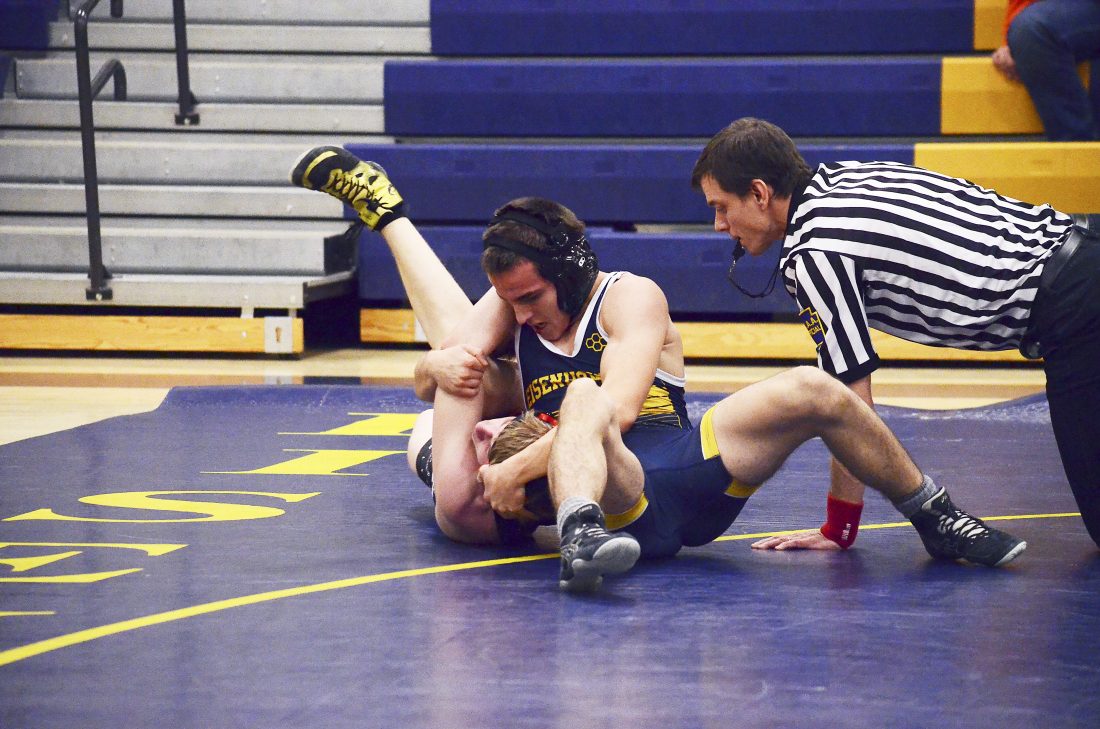 Eisenhower’s Alex Hummel turns Youngsville’s Collin Clough for a near fall during their 138-pound match at Eisenhower High School, Wednesday, Dec. 11, 2019. Hummel eventually came away with a third period pin and the Knights topped the Eagles, 75-6.

Hummel escaped to start the second, but Clough came back with a takedown to hold a 4-2 lead going into the third. Clough gave up a point early in the third and shot in for a takedown. Hummel was able to reverse the shot and got Clough down for a near fall. The wreslters moved out of bounds, and on the restart, Hummel cinched in a cradle for the pinfall victory.

“Alex was our Hertel & Brown Wrestler of the Match tonight,” Black said. “He doesn’t panic. He’s a competitor and likes to compete. He can be a little funky to wrestle against.”

Early in the 170-pound match, it appeared Youngsville would pick up its second victory of the night. Damon Reese had former Eagle Steven Reilly caught in a cradle during the first period. Reilly was able to fight his way out of it and pick up a takedown before the period ended. Reese led 5-4 after the first, but Reilly scored a takedown and nearfall in the second to take an 8-5 lead. Reilly grabbed another takedown in the third to come away with the only decision of the match, 10-5.

“He came to us from Youngsville,” Black said. “This was a nice win for him. He’s been working hard.”

The match started at 195 where Tristen Wilcox decked Joe Lindstrom in 1:43 to put Eisenhower up 6-0. Cael Black needed just 25 seconds to put down Elijah Cottrell at 220. DeSimone picked up the forfeit win, then Anthony Rivera, Kamden Ferand and Ethan Nizzi got forfeit victories at 106, 113 and 120, respectively for the Knights.

Logan Jaquay pinned Logan McDonald in 1:07 at 126 and Easton Headman followed with a forfeit win at 132 before Clough and Hummel took the mat. Gannon Jaquay got the final forfeit win of the night at 145 and Josh Bortz decked Cadan McCura in 1:00 at 152.

Benji Bauer was able to get Michael Crane on his back in the second period at 160 just before Reese and Reilly had their tilt at 170. Jeremyiah Aiken closed out the win in 1:02 over Sawyer Lawson at 182.

“The guys haven’t competed yet this year and they were tired of seeing each other in the practice room,” Black said. “I thought our conditioning was OK. We’re getting there. Now we know what we need to work on.”

Eisenhower’s Steven Reilly tries to pull Youngsville’s Damon Reese down to the mat during their 170-pound match at Eisenhower High School, Wednesday, Dec. 11, 2019. Reilly came away with a 10-5 decision over his former teammate and the Knights took down the Eagles, 75-6.

Eisenhower’s Alex Hummel turns Youngsville’s Collin Clough for a near fall during their 138-pound match at Eisenhower High School, Wednesday, Dec. 11, 2019. Hummel eventually came away with a third period pin and the Knights topped the Eagles, 75-6.

Youngsville’s Brady Olewine puts up a jumper during the first half of Wednesday’s home opener for the Eagles against Oil City. The Eagles came out on the short end of a 50-25 score. They will look to bounce back on Friday when they host Sheffield.