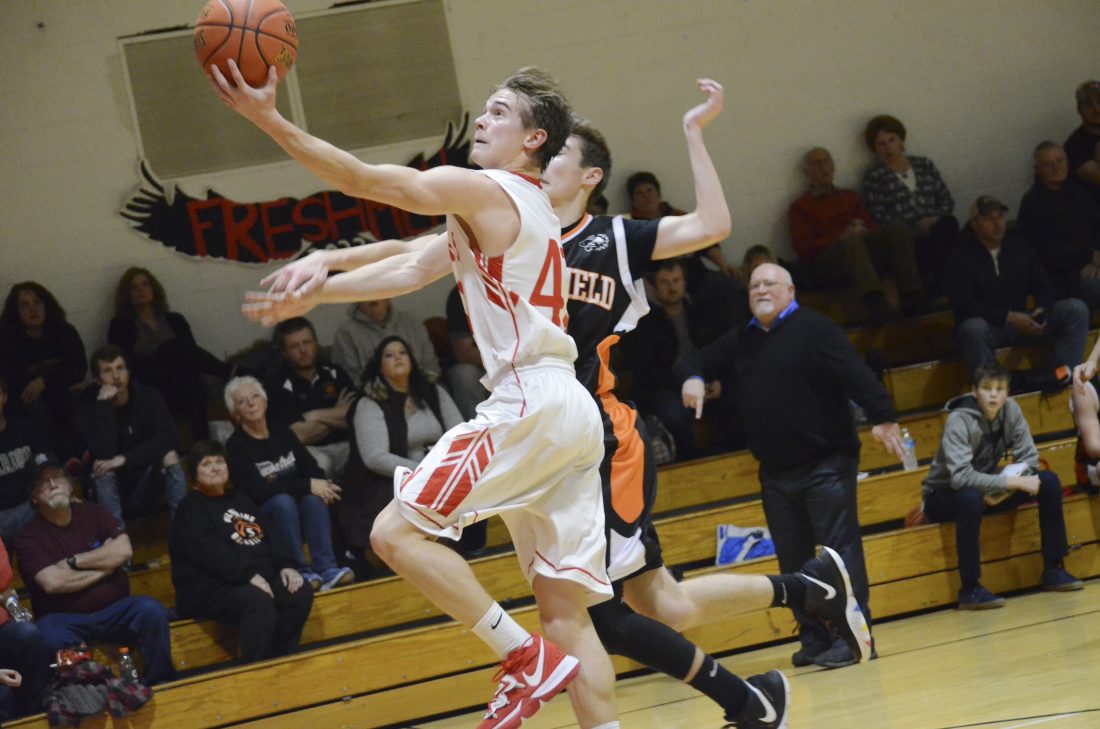 Youngsville’s Brady Olewine soars in for two of his 16 points during the Eagles 67-51 win over Sheffield, Friday, December 13, 2019 at Youngsville High School.

In the blink of an eye, Friday’s county battle between Youngsville and Sheffield turned from a close game to a blowout.

Leading by 10 at halftime, Gage Hendrickson scored nine points in less than two minutes and the Eagles outscored the Wolverines 25-4 in the third quarter en route to a 67-51 on their home court.

“We talk about surges in games,” said Youngsville coach Jesse DeLoof. “We’re up 10 and I said to the guys at halftime, ‘do we extend it, or do they cut it to 2 and it’s a dog fight?’ To our guys’ credit, they put the game away.”

Hendrickson scored 21 points and pulled down 12 rebounds. He hit a 3 on the Eagles opening possession of the second half, followed by an old-school 3-point play.

Joe Mack got a steal on the next possession and the Eagles worked the ball around to Hendrickson for another long ball and all of a sudden a 30-20 halftime score was 39-20 in mere moments. 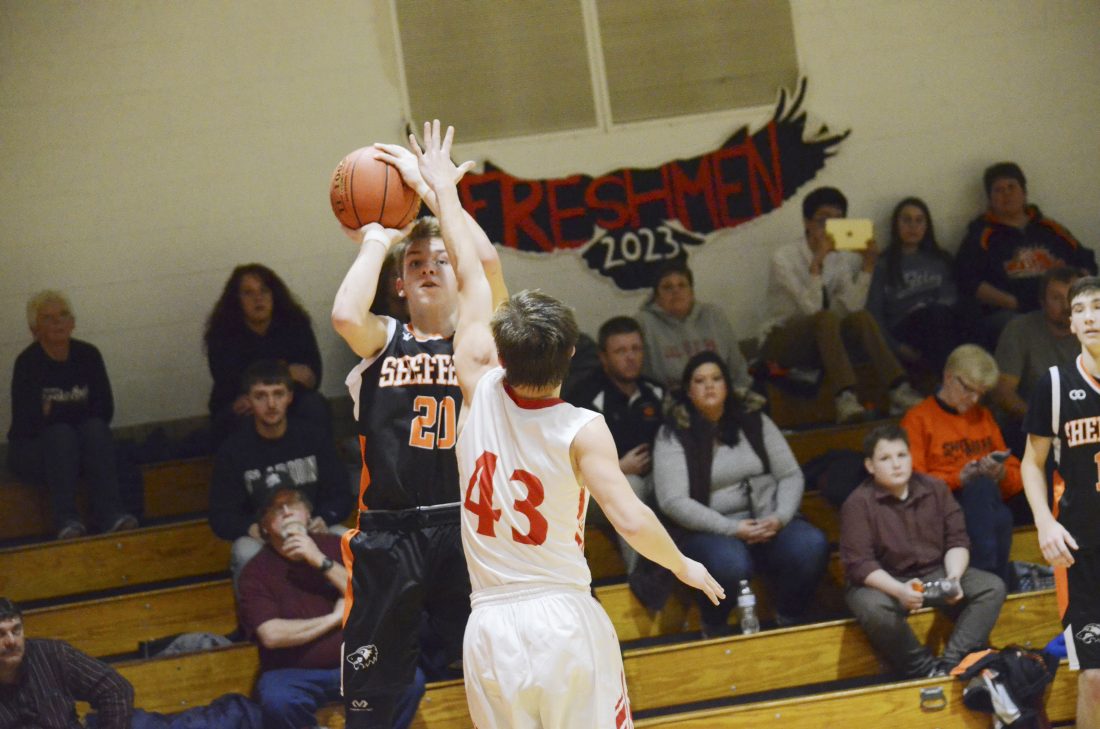 Sheffield's Jake Vinopal puts up a jumper during the second half of Friday's game.

The Eagles (2-2) continued to build the margin and led by as many as 33 after a Brady Olewine jumper late in the third quarter.

“I thought we played with a lot of energy, but it wasn’t always focused energy,” DeLoof added. “We played hard and were focused at times, but not for 32 minutes.”

Sheffield (0-3) kept the game close in the first half, thanks to a balanced scoring effort.

Mitch McNeal’s 3-point play early in the second quarter made it 18-11 but was followed by a quick surge by the Eagles, capped by a Mack 3-point play that made it 23-10.

Sheffield’s Tony Richards had an offensive putback right before the half to get it back to 10. 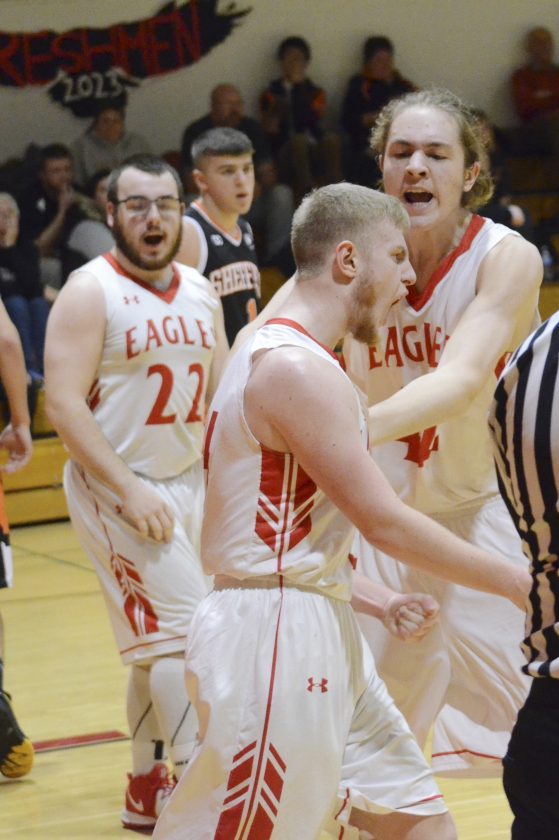 “The guys really like these county games,” DeLoof said. “We have a lot of respect for Sheffield and we root for them in all of their other games.”

Sheffield’s Jake Davidson tries to lock down Oswayo Valley’s Michael Hewitt during the third period of their 170-pound match at Sheffield High School, Friday, Dec. 13, 2019. Davidson came away with a pinfall victory and the Wolverines rolled to a 54-8 win over the Green Wave.

Sheffield’s AJ Barnes locks up with Oswayo Valley’s Jake Rhinehart during their 113-pound match at Sheffield High School, Friday, Dec. 13, 2019. Barnes’ second period pin was one of four pinfalls for the Wolverines in their 54-8 win over the Green Wave.

Youngsville’s Brady Olewine soars in for two of his 16 points during the Eagles 67-51 win over Sheffield, Friday, December 13, 2019 at Youngsville High School.

Sheffield’s Jake Vinopal puts up a jumper during the second half of Friday’s game.

To Sheffield’s credit, they didn’t quit despite the big margin.

Tyler Hepinger, who was making his season debut, simply went off in the fourth quarter.

The sharp-shooting junior scored 21 of his game-high 27 points in the final eight minutes as Sheffield got the margin as low as 16, which ended up being the final.

It’s rare for a high school player to have a quarter like that scoring the ball, and Hepinger’s ability to hit 3’s and create his own shot bodes well going forward for the Wolverines as they look ahead to AML play.

For Youngsville, they were pleased with the win, but they know they can play a lot better as they look to take the next step as a program.

“I’d be lying if I told them that was good enough for 32 minutes,” DeLoof said. “We’re always happy with a win, but we have to get better.”

The Eagles will get that chance on Tuesday when they open up Region 3 play, hosting Cochranton.

DUKE CENTER, Pa. – In a game that didn’t end until nearly 11 p.m., Eisenhower picked up a thrilling 49-48 OT win over Otto-Eldred in overtime at the Randy Stebbins Memorial Tournament on Friday night.

Details will be published in Monday’s edition of the Times Observer.