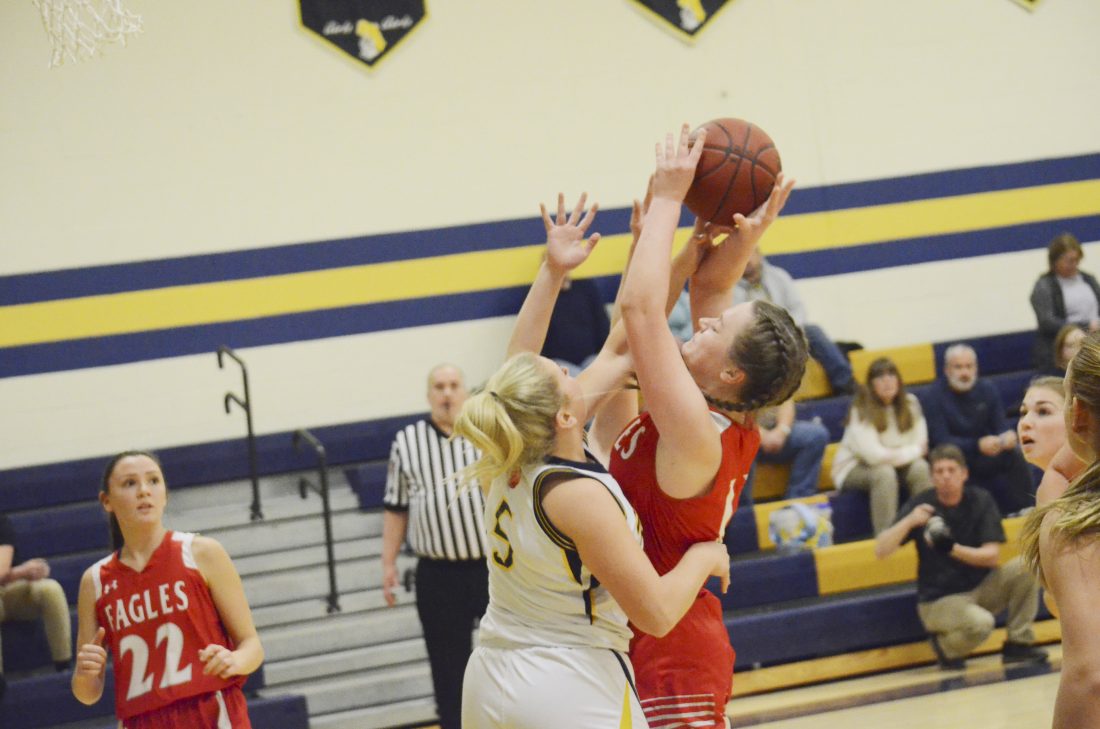 Youngsville’s Chloe Senz goes up for a shot as she is fouled by Eisenhower’s Lilee Renninger during the first quarter of Thursday’s Backyard Brawl. Senz played a strong first half and Renninger was great in the second half as the Lady Eagles earned a hard-fought 41-39 win.

Thursday’s Backyard Brawl, girls basketball edition between Youngsville and Eisenhower was exactly the stuff rivalries are made of.

The Lady Knights had multiple chances to tie the game in the final 20 seconds, but Youngsville held them off for a thrilling 41-39 on Thursday at Eisenhower.

“That was pretty intense,” said Youngsville coach Vicky Montecalvo. “The girls showed a lot of heart and how much they wanted to win.”

Montecalvo’s Lady Eagles never trailed in the game, but never pulled away either.

They led by as many as 10, 20-10 in the first half, but Eisenhower cut that margin to five by halftime. 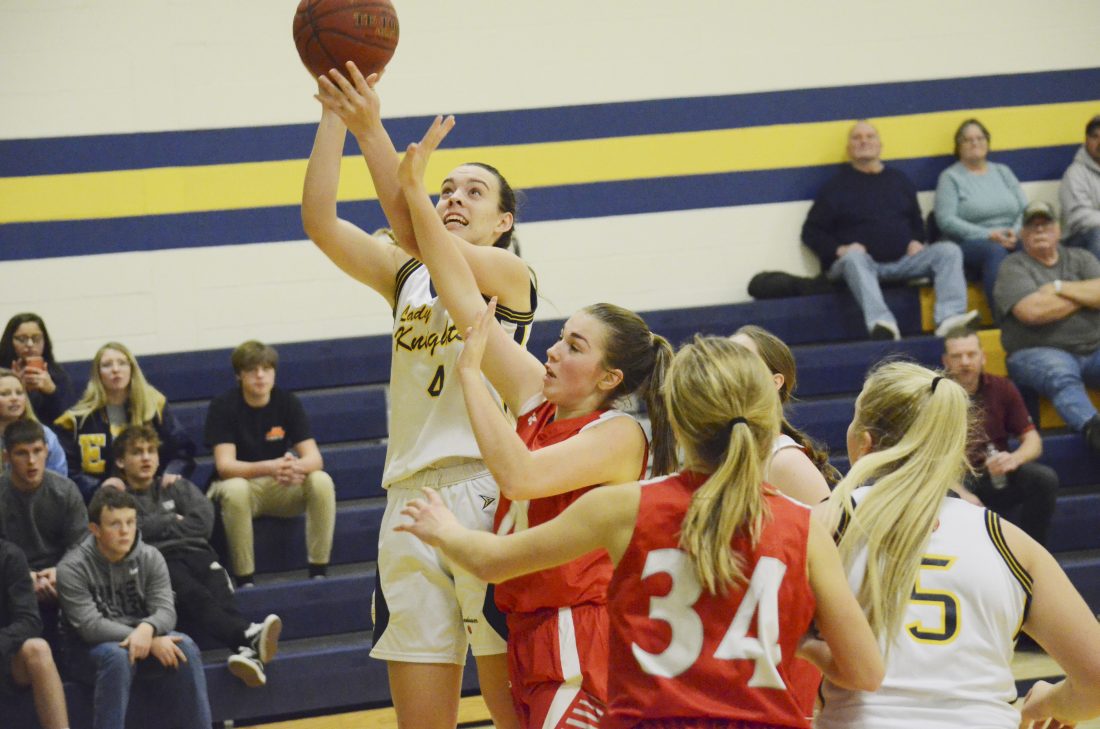 Eisenhower’s Emiley Wheeler is defended by Youngsville’s Mallory Sherrard as she goes up for two of her team-high 14 points.

For EHS coach Mike Logue, that first quarter was all the difference.

“That’s why it’s a rivalry,” he said. “The difference was the first quarter. They came out ready to play and we were a little sluggish.”

Despite that, Eisenhower had their chances late.

Down 41-39, Lilee Renninger, who played a strong second half after getting into foul trouble, got an offensive rebound and was fouled, sending her to the line for a 1-and-1. She missed the front end, but another offensive rebound gave Eisenhower another crack at it.

Logue called time out, and freshman Bella Marino got an open corner jumper out of it, but the ball bounced off the back of the rim and Youngsville collected the rebound and nearly ran out the clock, with Sadie Hoffman getting fouled with 0.7 seconds left. 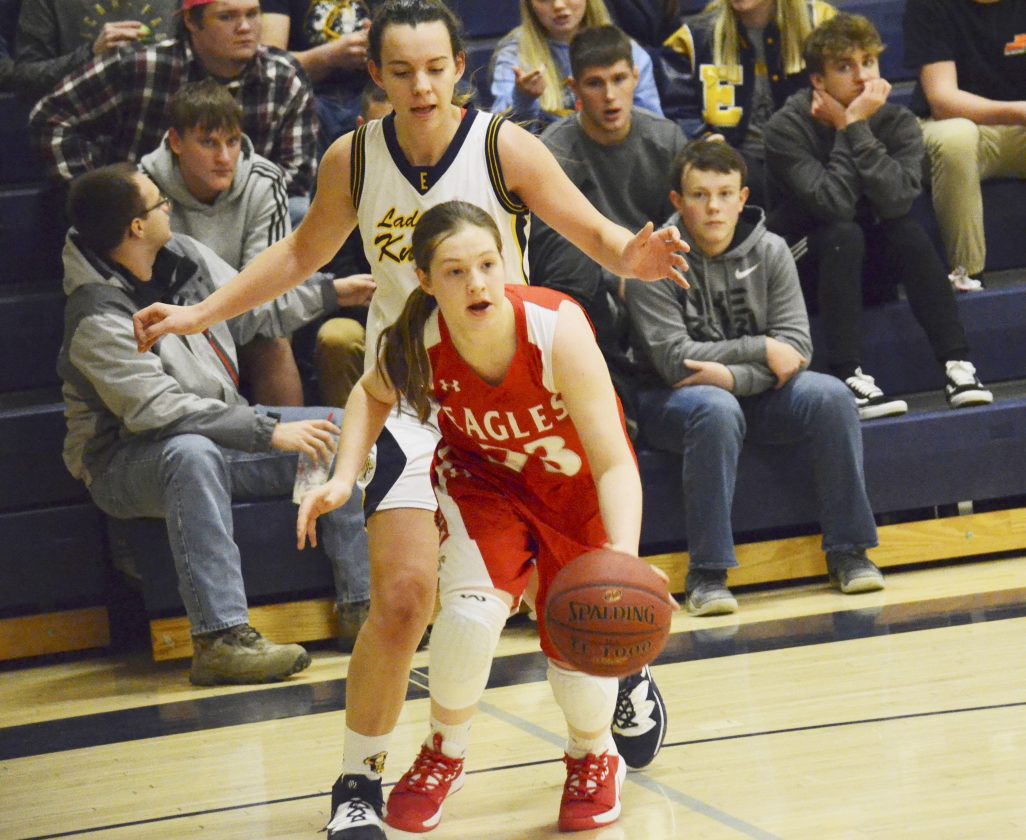 “We had a few errors down the stretch, but the girls came through,” Montecalvo said. After pausing for a moment she added:

Eisenhower’s Lilee Renninger goes up for two of her eight points.

Eisenhower’s Emiley Wheeler is defended by Youngsville’s Mallory Sherrard as she goes up for two of her team-high 14 points.

Youngsville’s Chloe Senz goes up for a shot as she is fouled by Eisenhower’s Lilee Renninger during the first quarter of Thursday’s Backyard Brawl. Senz played a strong first half and Renninger was great in the second half as the Lady Eagles earned a hard-fought 41-39 win.

Warren’s Emma Ruhlman (15) puts up a jump shot over McDowell defenders during the first half of their game at Warren Area High School, Thursday, Dec. 12, 2019. Ruhlman led the Dragons with 14 points, six rebounds and four steals, but the Trojans came away with a 44-32 win.

Warren’s Teagan Paris (23) battles McDowell’s Jordyn Hetz (12) for a rebound during the second half of their game at Warren Area High School, Thursday, Dec. 12, 2019. The Trojans came out on top of a defensive battle with a 44-32 win over the Dragons.

“wow that was good.”

Speaking of good, that’s exactly what Chloe Senz was in the first half for the Lady Eagles (3-1).

Senz scored six of her 10 points during a 10-4 run to start the second quarter that gave YHS its 10-point cushion. She also pulled down a team-high eight rebounds, seven of which were the offensive variety.

“I didn’t realize she only had one year of experience playing,” Montecalvo, who also serves as the head volleyball coach and came through in a pinch to fill the basketball coaching vacancy shortly before winter practices started, said. “She’s a natural. She’s tough and holds her ground inside.”

Delaney Chase buried a jumper for Eisenhower (0-3) and Emiley Wheeler converted a 3-point play late in the second quarter to cut it to 22-17 at halftime. 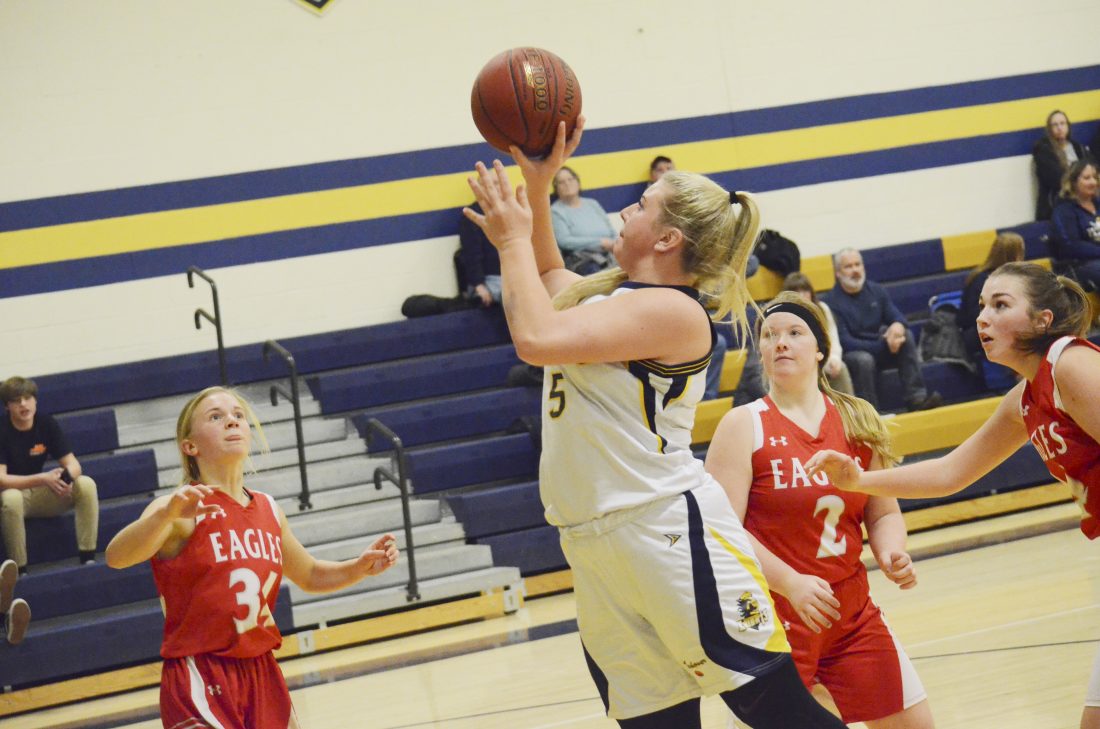 Eisenhower's Lilee Renninger goes up for two of her eight points.

“A lot of our offense goes through Emiley,” Logue said. “We really feed off of her. Emiley also understands that it’s not always open scoring, but getting it to an open teammate when defenses focus on her. We had a nice high-low tonight that gets Delaney open for a shot.”

The lead got as big as nine again in the third quarter, thanks in large part to the play of Kamryn Weissinger. The junior scored six of her eight points in the third, all on jump shots.

Eisenhower took the momentum going into the fourth, however.

Wheeler got fouled with five seconds left and made the first but missed the second. After a mad scramble, Renninger got control and hit a layup as she was fouled just before the horn. She missed the free throw, but the lead was once again down to 3, 33-30.

Hoffman hit a big shot to open the fourth quarter, putting Youngsville up five, and the lead got to eight after another Hoffman jumper.

Eisenhower clawed back to get a chance in the final moments, as Chase hit a jumper with 2:05 to play to make it a 4-point game, and her layup with 1:01 left on the clock made it 41-39.

“When you play, you learn from every game,” Logue said. “This game is a great learning experience for us.”

Wheeler finished with 14 points and 12 rebounds to lead Eisenhower, while Chase had 11 points and Renninger eight.

Hoffman had 15 points to pace a Youngsville team that, for obvious reasons, was fired up after the final whistle.

“Sadie said it, this is the game that a lot of them really look forward to,” Montecalvo said. “Sometimes in games like these it comes down to heart and emotion more than skill.”

CAMBRIDGE SPRINGS, Pa. – Region 2 contender Cambridge Springs jumped out to a 20-2 lead after the first quarter en route to a 56-16 win over Tidioute.

“You can’t expect to compete with Cambridge Springs if you can’t keep up with them,” said Tidioute coach Christy Valentine. “Fast breaks beat us and not staying on our toes defensively. We continue to be cold at the hoop.” 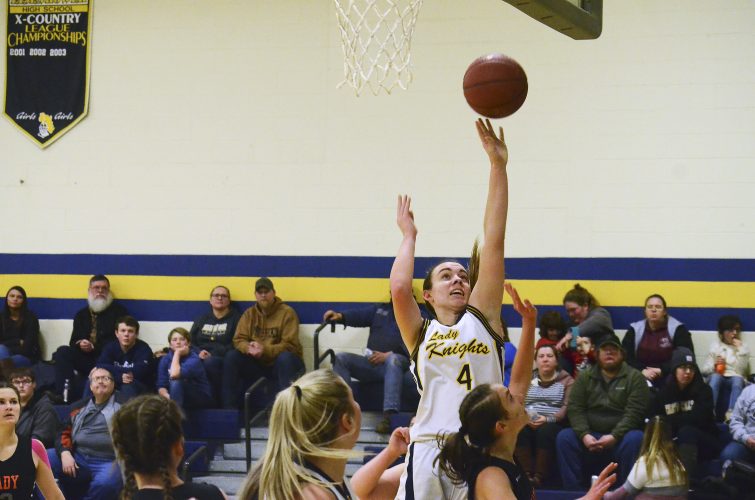 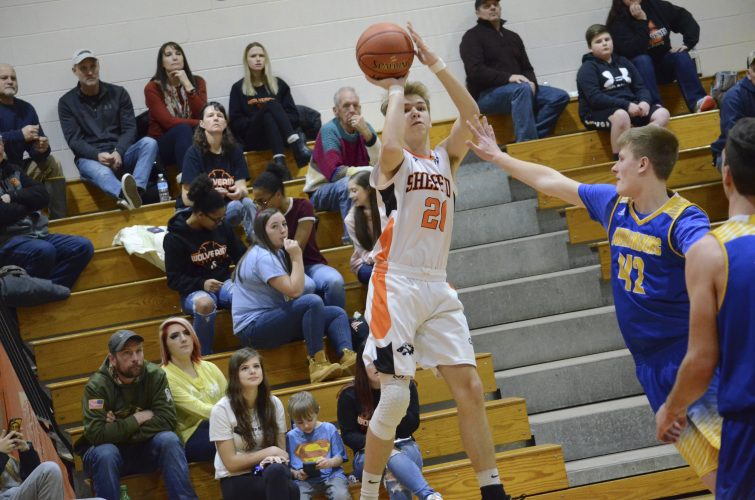