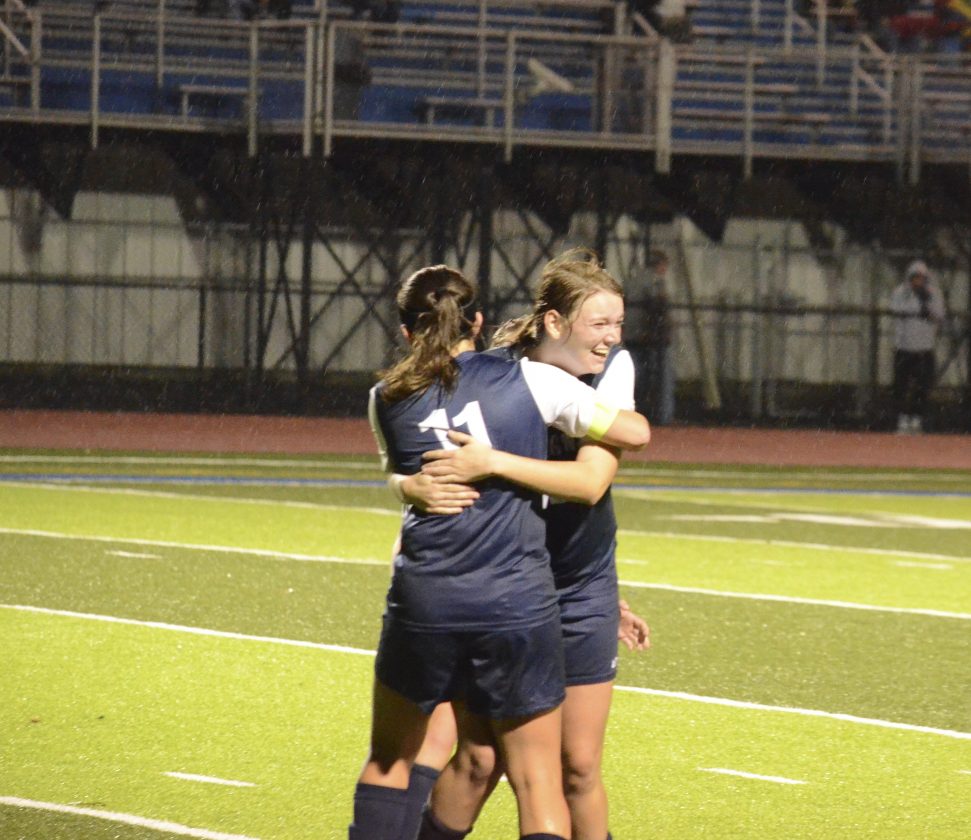 The last four years have been building to this.

For the eight seniors on the Warren girls soccer team, it’s been a journey filled with hard work, adversity and heartbreak. But also rewards, milestones and, finally, the pure joy that came with bringing home the program’s first District 10 title last week.

Appropriately, three seniors accounted for all three goals in the Dragons’ 3-2, overtime win over Meadville Wednesday. MJ Fadale, playing in her first game in almost a month due to injury, got things started with a header just seven minutes in. Mikaala Deppen cashed in when she corralled a loose ball in front midway through the second half. Two minutes into overtime, Fadale drew a foul and Sawyer Mohney put the ball in the top corner on the free kick to clinch the title.

Now, the Dragons (14-4-1) face a new journey, the PIAA state playoffs. There will be no easing their way in either. Warren’s first round opponent is strikingly similar in a lot of ways, but also presents a formidable challenge.

“It’s going to be one tough match out of the shoot,” Bickling said.

Warren opens the state playoffs tonight against the WPIAL champion, Mars, at North Allegheny High School in Wexford. The Fightin’ Planets (18-0-1) rolled through both the regular season and the WPIAL playoffs en route to claiming the sixth championship in program history. Mars had reached the WPIAL final the previous two seasons, but came up short. The Fightin’ Planets scored four first-half goals in a 4-0 win over Plum in this year’s final to claim the title.

Dominant throughout the season, Mars has ratcheted up the intensity lately. Over their last eight games the Fightin’ Planets have outscored their opponents, 43-0.

“We know it’s going to be a tough game,” Fadale said.

Both of Hamlett’s goals in the title match came as she put her speed to use and got behind the defense. In addition to the speed, the Dragons will have to be wary of the Planets on set pieces.

“We do pretty well on set pieces,” Mars coach Blair Gerlach told the Tribune-Review after the win Saturday. “We have some very good athletes. We always call it the ‘boys syndrome.’ We have a couple girls who can judge a ball in the air, which is usually a weakness in girls soccer. But I feel like we’ve been dangerous on set pieces.”

Through a season plagued by injury, one thing the Dragons have been able to lean on is the defense.

Led by seniors Aubrianna Navaroli and Emily Egger and sophomore Lennon Dailey, the back line has kept most teams from getting many quality chances. Even when teams were able to break through, keeper Alyssa Andersen has been up to the challenge. To date, she has allowed more than two goals just twice this season (both losses to McDowell) and has 10 shutouts.

“Alyssa is going to clean everything up that comes in from distance,” Bickling said earlier this season. “She makes good decisions. The only time you’re going to beat her is when it’s 1-v-1.”

The Dragons know advancing past the Planets will be no easy task, nothing this season, really, has come easy for them. Still, finally breaking through and getting that first D-10 title has them brimming with confidence for the state tournament.

“Outside of McDowell, we’ve played with everybody,” Bickling said. “We think we can compete with anyone.”

More than just compete, those seniors want to keep winning.

“We know we have capable players,” Mohney said. “We could surprise some people.”

Kickoff at North Allegheny is set for 6 p.m.