Fought to the end 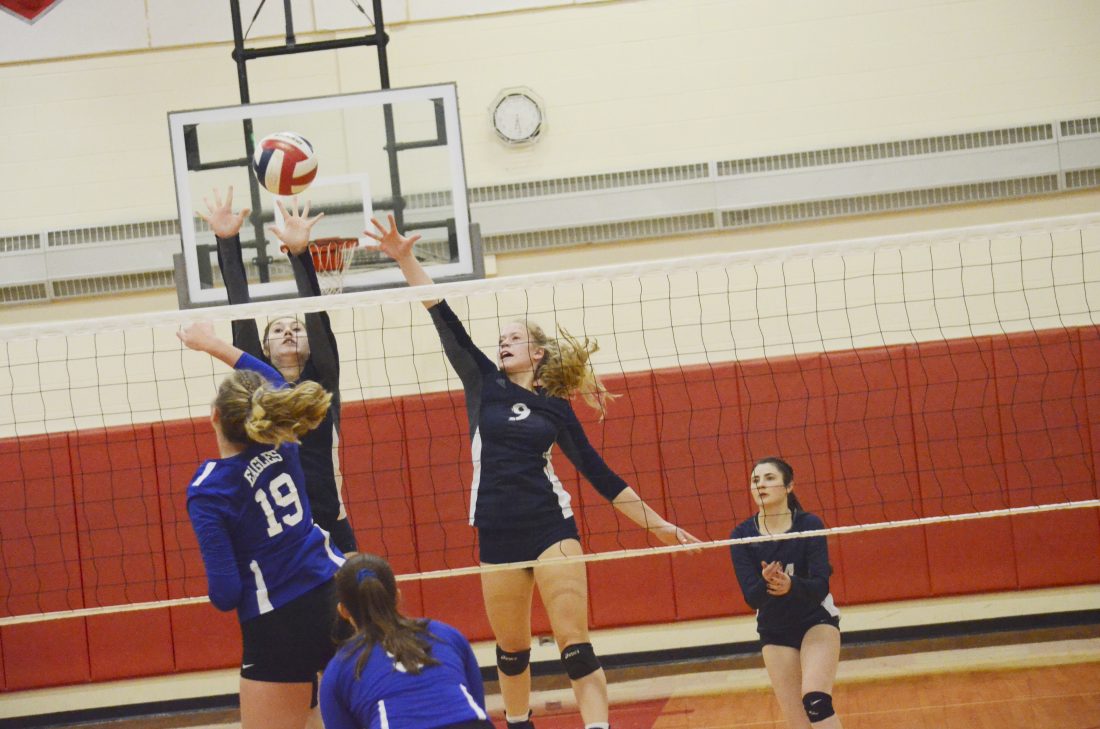 Times Observer photo by Andy Close Warren’s Jordan Sitler (7) and Hannah Shattuck (9) go up for a block attempt on Conneaut’s Taylor Kersnick, as Dragon Grace Wortman (14) looks on during their District 10 Class 3A semifinal match, Thursday, October 31, 2019 at General McLane High School. Shattuck had a team-high 8 kills and Sitler 6, but it wasn’t enough, as Conneaut advanced with a 3-0 (19-25, 17-25, 19-25) victory.

EDINBORO, Pa. – Up until the final point of Warren’s 3-0 (19-25, 17-25, 19-25) loss to Conneaut in the District 10 Class 3A volleyball semifinals, Lex Nyquist and Grace Wortman, the Dragons’ two seniors, could be seen encouraging their teammates, still fighting for every last point.

And, as coach Mike Dolan put it, this group of Dragons, led by those two seniors, is never out of it.

“They were encouraging everyone to keep the fight going,” Dolan said of Wortman and Nyquist. “Until the final point landed, I believed we had a chance. That’s because of them and how they keep everyone playing well.”

For Conneaut, meanwhile, this was a measure of revenge. Warren beat the Eagles 3-1 in the D-10 finals a year ago on their way to the state final.

Try as they might, the Dragons couldn’t quite contain junior outside hitter Cassidy Snider, who came up with a number of thunderous kills on the night.

The Eagles’ other big hitter, Taylor Kersnick, was also on, but really, this was a different Conneaut team than the one that stumbled at the end of the regular season.

“They were on,” Dolan said simply. “They have an elite player in Cassidy (Snider). We knew she was going to get some on us, but we needed to slow her down more than we did. They also played good defense on us. We couldn’t put the ball away quite as efficiently as we have been. Those things added up to that result.”

Game one was back-and-forth, with neither team leading by more than three until Conneaut went up 20-15.

Jordan Sitler, Grace Wortman and Hannah Shattuck all had multiple kills, and an ace from Meredith Morrison cut the five-point deficit to two, 20-18.

That was short-lived, however, as Snider put down a kill and Kersnick had an ace to close out the set.

Warren took its first and only lead of the match early in Game 2, jumping out to a 2-0 advantage after a Sitler kill. That didn’t last long, however. Conneaut’s offense went back to work, overwhelming the Dragons at times and building a double-digit lead, 21-10.

Kills from Shattuck and Halee Mineweaser got it within 22-14, but Warren got no closer.

Unfortunately for the Dragons, Game 3 didn’t go much better.

Conneaut raced to an 8-3 advantage, and Wortman got Warren back to within three, 12-9, after a kill.

The Eagles responded with a 9-3 run, however, thanks to Snider and Kersnick.

Trailing by seven, the Dragons won a long rally to get back within five, 20-15, but, as they did all match, Conneaut had an answer.

So, while the Eagles move on to face Meadville (a 3-1 winner over Harbor Creek) in the D-10 final, Warren will sit back and reflect on a season that saw them accomplish so much after losing a large chunk of last season’s state runner-up team to graduation.

“This season has had quite a few arcs,” Dolan said. “I don’t think anyone thought we were going to do very much this year, losing what we did. But I think everyone who saw us play thought we were a high-level team. I’ll take these guys over anyone. We’d play them (Conneaut) again if we could.”

Nyquist and Wortman did a lot of winning in their four years, but more than that, they did a whole lot of leading, especially this season.

Dolan sees that carrying over to the returning players.

“I think we can keep it going,” he said. “Everyone learning from Lex and Grace, how to lead, keep people motivated. I like the way we look for the future. We have high-level attackers back, as well as good defense. I’m encouraged.”