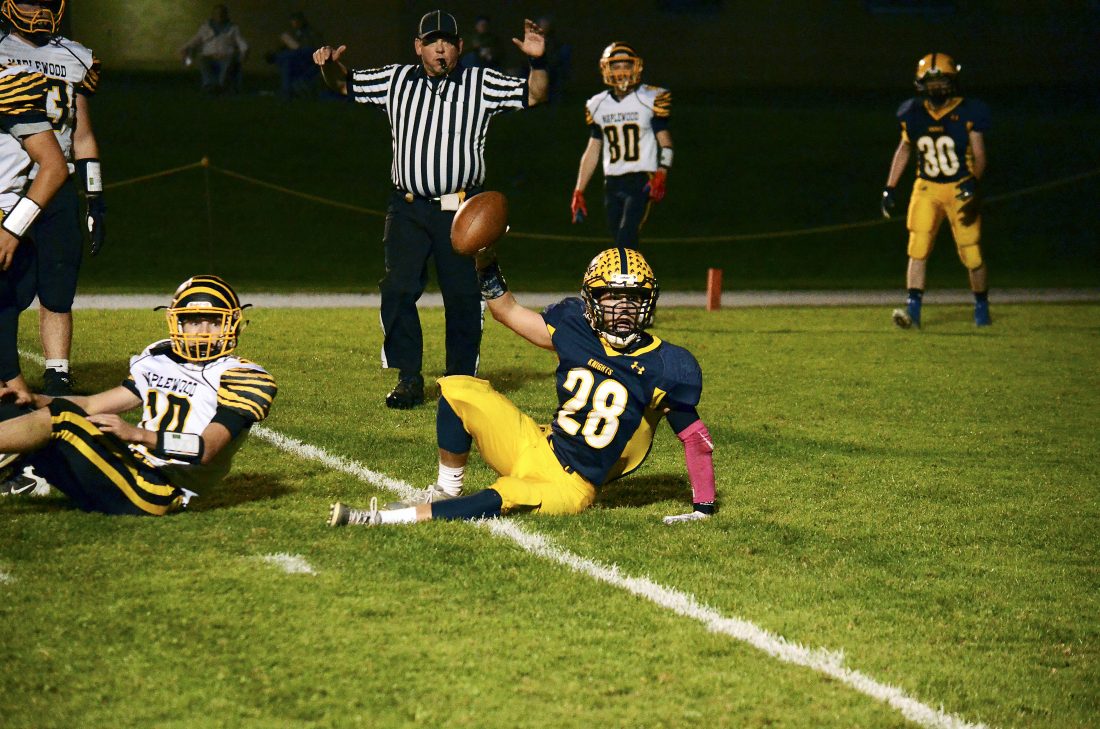 Eisenhower’s Dillon Benson (28) holds up the ball after securing a touchdown catch during the second quarter of a game against Maplewood at Eisenhower High School, Friday, Oct. 11, 2019. Benson had another solid game with seven catches for 90 yards, but the Tigers topped the Knights, 52-21.

The Tigers ran for 279 yards, threw for 203 more and held the Knights to just 183 total yards. Maplewood clinched at least a share of the Region 2 title with the win as well.

“They’re a phenomenal team,” Eisenhower coach Jim Penley said. “They’re more explosive. But I was pleased by the effort. The kids didn’t quit at all. They scrapped and clawed with this team.”

Donor scored the first of his five TDs on the Tigers (8-0 overall, 4-0 Region 2) opening possession. He capped a six-play drive with a 13-yard scamper to put Maplewood ahead 6-0.

Quarterback JD McFadden followed a 44-yard pass to brother Jesse with a 6-yard keeper for his first touchdown of the night. Donor ran in the conversion to make it 14-0 midway through the first quarter.

On first down from the Eisenhower 18, JD McFadden ran a pitch play to Donor. Donor fumbled the pitch, picked it up, reversed field and beat the Knights defense to the corner for his second score of the game and a 20-0 lead after the first quarter.

Donor wasn’t so lucky on the next possession.

He caught a tipped pass, but fumbled as he was going to the ground. Eisenhower’s Caleb Robinault jumped on it to give the Knights (2-6, 2-2) first down inside Tigers territory.

Owen Trumbull connected with Zane Alexander for 38 yards to set up a first-and-goal, and two plays later hit Dillon Benson for a 3-yard scoring strike to cut the lead to 20-7.

The Tigers wasted little time responding. Donor’s 37-yard run, plus a facemask penalty, moved Maplewood into the redzone and Donor punched it in from five yards out on the third play of the drive for a 28-7 advantage.

Maplewood tacked on another score just before the half ended when JD McFadden hit a wide open Jesse McFadden in the back of the endzone with just 21 seconds left.

The conversion failed and the Tigers took a 34-7 lead into the lockerroom.

“We’ve got to be more solid in the run game,” Penley said.

The Knights tried an onside kick to start the second half, but Kelis Joliet caught it, bobbled it, escaped a tackle and took it down the sideline to the Eisenhower 17. Donor ran it in two plays later for a 40-7 lead.

Eisenhower answered with a seven-play scoring drive highlighted by a 32-yard pass play from Trumbull to Benson that gave the Knights first-and-goal from the 10. Alexander looked to be bottled up at the 5, but managed to keep his balance and roll through the pile. He regained his footing and waltzed into the endzone.

With time winding down in the third quarter, Maplewood took over at its own 24. JD McFadden dropped back to pass and was immediately pressured. The Tigers had set up a screen play, however, and JD McFadden dumped it off to Donor who had plenty of blockers in front. He outsprinted the defense down the middle of the field for his final score of the night and a 46-14 advantage.

“We play sound, but then give up a big play,” Penley said. “The big plays are killing us.”

Jason McFadden got in on the scoring action with a 55-yard run early in the fourth quarter and Trumbull closed it out with a 3-yard run with just under four minutes to go.

Donor finished with 154 rushing yards, 91 receiving yards and the five scores. JD McFadden was 10-17 for 203 yards and two passing touchdowns and added another 25 yards and a score on the ground. Jesse McFadden had five receptions for 99 yards and a touchdown.

Trumbull was efficient again, going 11-16 for 142 yards and a touchdown. Benson continued his breakout season with seven catches for 90 yards and a score. Alexander had 35 rushing yards and 43 receiving yards.

Maplewood can lock up the outright Region 2 title with a win at Saegertown next week.

Eisenhower closes out its home schedule by welcoming Cochranton to the Pasture of Pain.