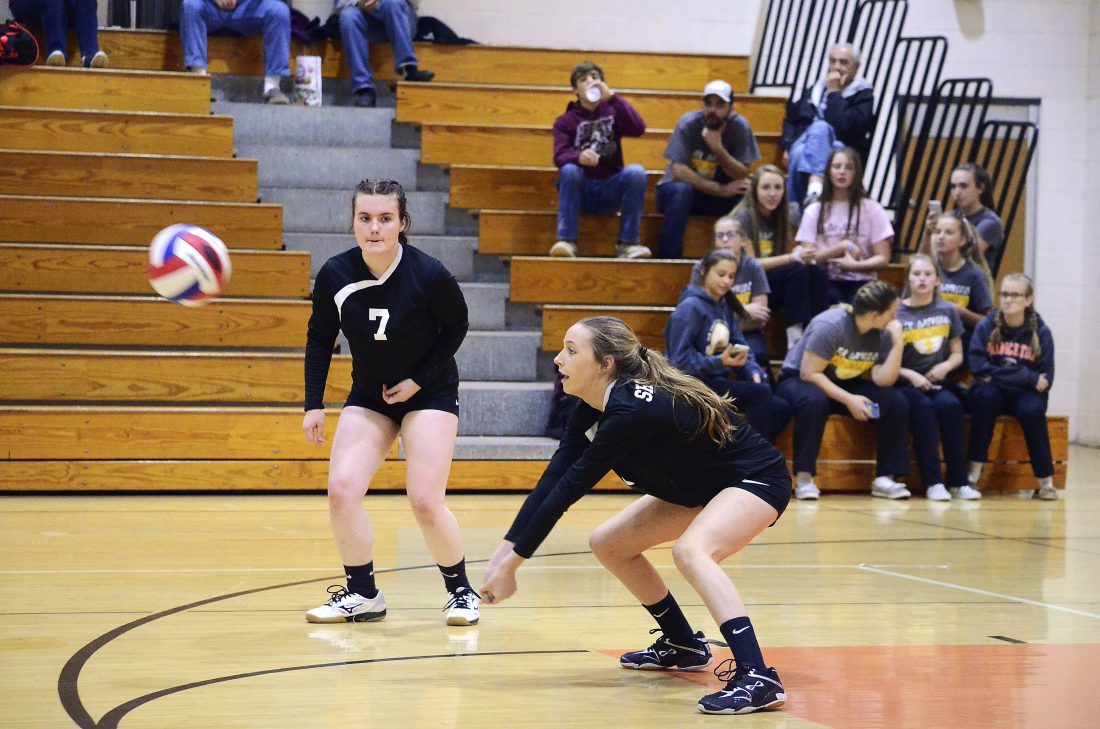 Sheffield’s Caidence Anderson passes to a teammate during the second set of a match against Elk County Catholic at Sheffield High School, Thursday, Oct. 17, 2019. The Lady Crusaders remained undefeated on the year with a 25-12, 25-17 and 25-17 sweep of the Wolverines.

When you have a beast, it’s best to keep it well fed.

That’s exactly what Elk County Catholic did with its phenomenal outside hitter, Taylor Newton, Thursday at Sheffield. The Lady Crusaders turned to the senior whenever they needed a boost and she delivered with 27 kills in a sweep of the Wolverines.

“The girls did a good job,” Sheffield coach Melissa Lemay said. “We cheated over to (Newton) but we were still late. We had eight block errors, which means we weren’t getting set before she went up.”

Newton wasted little time getting the unbeaten Crusaders out to an early lead. She had three kills in the first five points of the match and ECC jumped out to a 10-3 lead in the first. Megan Johnson and Emily Leichtenberger found the floor on back-to-back points to trim the deficit to 12-6, but that was as close as the Wolverines would get in the set. Newton finished with eight kills in the set and ECC won it 25-12.

Sheffield led through most of the early part of the second set. Lynzie Grubbs put down a kill and Marissa Grubbs had a big dig on Newton to put the Wolverines on top, 3-1. Ana McCracken’s kill made it 4-1. Unsurprisingly, ECC turned to its bread and butter on the next point and Newton rattled off three straight kills to tie it at 4-4. A Tori Childress kill gave Sheffield the 6-4 advantage, but Newton responded with another trio of kills to give the Crusaders a 7-6 lead. She had another set of three straight to put ECC ahead 18-11. Julia Aikens put down a pair of kills to get ECC to set point at 24-14. Sheffield tried to battle back and scored three straight to keep the set alive, but Madyson Dellaquila ended it with a kill for the 25-17 win.

“We knew we weren’t going to out power them,” Lemay said. “We did a better job finding the floor in the second set.”

The Crusaders jumped out to a 4-0 lead to start the second, but the Wolverines battled back to tie it at 5-5. Five times ECC went up one, and five times Sheffield tied it but was unable to grab the lead. The Crusaders were able to keep the Wolverines at bay long enough to start to pull away late. Sheffield got within two at 18-16, but ECC answered with a 6-0 run to get to match point. Leichtenberger put down a kill to extend the match, but a service error ended it.

“This was our third match this week,” Lemay said. “Thankfully, they were all at home, but it’s tiring.”

In addition to Newton’s strong match, Aikens finished with 11 kills and setter Ellie Fledderman had 31 assists.

Megan Johnson had a strong all-around match for the Wolverines. She finished with 12 digs and 15 assists, all without committing an error.

“In a match like this, you look for little wins,” Lemay said. “Fifty-three digs to only 23 dig errors, that’s a win for us.”

Marissa Grubbs had 17 digs, while Leichtenberger had eight digs and five kills. Lexi Goldthwaite had four kills and Lynzie Grubbs had three digs and three blocks.

Sheffield wraps up the regular season on the road next week with matches at Brockway Monday and at Tidioute Tuesday.