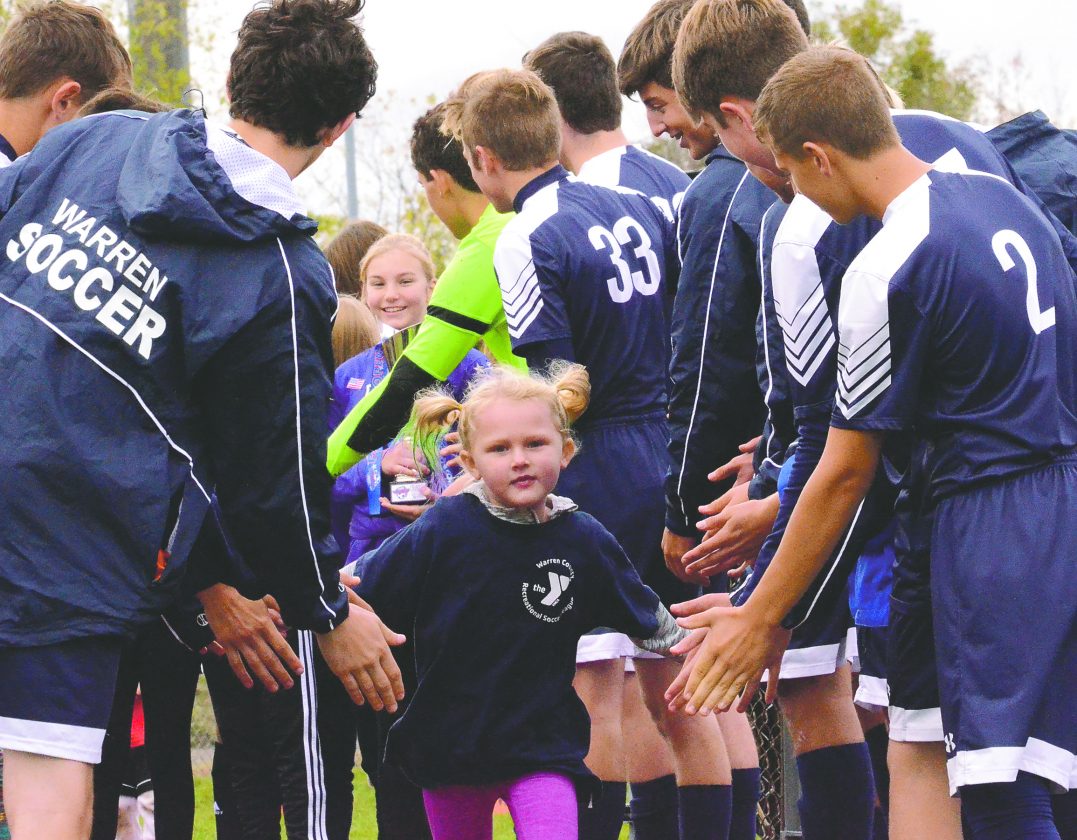 “We dominated the match and had plenty of scoring opportunities,” said Warren coach Denny Flatt.

The match also celebrated Youth Soccer Day. All youth players in attendance who are currently on an organized team received a gift from the boys Warren Soccer Boosters and were introduced and ran onto the field at halftime.

“The future of Warren High School is based on younger players and their continued interest in soccer participation,” coach Flatt said. “An example of this is the Kinzua Queens. They are a U13 girls’ traveling team that has already earned many accolades. They will be representing Warren at the President’s Cup in Pittsburgh on November 9. They wore their medals and carried their trophies proudly onto the field. We wish them the best of luck.”

The Dragons scored quickly in the second half, as Parks Ordiway found the net at 45:38 with Flatt providing the assist.

Blum scored at 51:18 with an assist from Lindell. The scoring concluded at the 75:00 when Tyler Gustafson’s throw in found Lindell who served it to Anderson for the score.

“We were able to get all of our players onto the field, which serves to give them varsity experience and rest some ‘dinged up’ players,” noted coach Flatt. “The backline had another solid match and shut down any opponents making it past midfield. Tyler Gustafson, our defensive ‘quarterback’ has had a great season. Due to injuries, three different players have been on his line, and he along with freshman Jack Darling, have adjusted and made it work.”

John Page’s play at his defensive midfield position has been a difference-maker all season. Saturday was no different, he finished with 17 tackles and 15 steals.

“Midfielder Wesley Kiehl played a pivotal role in our transition game,” said coach Flatt. “His ability to receive the ball and make good decisions impacts the majority of our attacks.

“Besides having a good season, the players have quietly been cheering on Caleb Lindell who is closing in on the all-time single-season goal scoring record set by Troy Burns in 2009. Troy’s record is 47 and Caleb currently has 41 with two regular-season games remaining. Everyone knows he is getting close, but nobody wants to speak of it. I compare it to no one talking about a no-hitter late in a baseball game. Sports superstition has definitely affected the players and coaches.

“We have two matches remaining. Our emphasis is the playoff preparation. Our last home match of the season is Monday against Meadville at 5 p.m., and it would be great to have a nice crowd on hand.”

The Warren girls rolled to victory in the first game of the soccer doubleheader. No other details were available at press time.

Seneca knocked off Eisenhower in non-region action. No other details were available at press time.