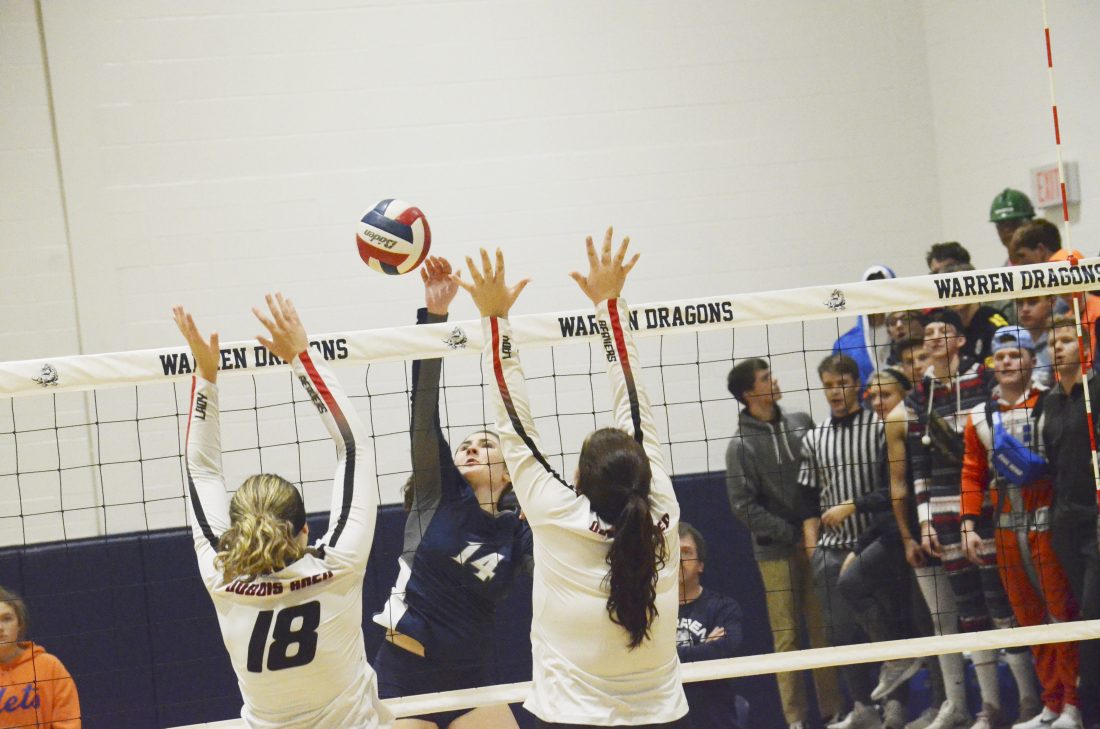 Warren senior Grace Wortman goes up for one of her team-high 16 kills in a thrilling win over previously unbeaten DuBois on Thursday. Wortman and fellow senior Lex Nyquist went off in style in their final home contest.

The way the Warren Dragons are playing right now, there isn’t anyone that wants a piece of the defending District 10 champions in the playoffs.

“None of them looked shaken,” said Warren coach Mike Dolan about the slow start. “The season we had last year helps with that. From that point, once we got back in the game, we were good.”

They were indeed, all the way to the point of a 27-25 win in the third set that ended courtesy of senior setter Lex Nyquist, who along with Grace Wortman, were playing their final home game. Instead of setting it to one of her hitters, Nyquist tipped the ball over the net for the final point, a fitting end to be sure.

“I don’t think I’ve ever seen a better player live in high school, especially as a setter,” Dolan said. “She gives us an opportunity on every point. Those phenomenal digs that she makes, whether it’s hitting up a ball that someone that can hit, no matter where it’s at. I can’t say enough about her and what she means to us.” 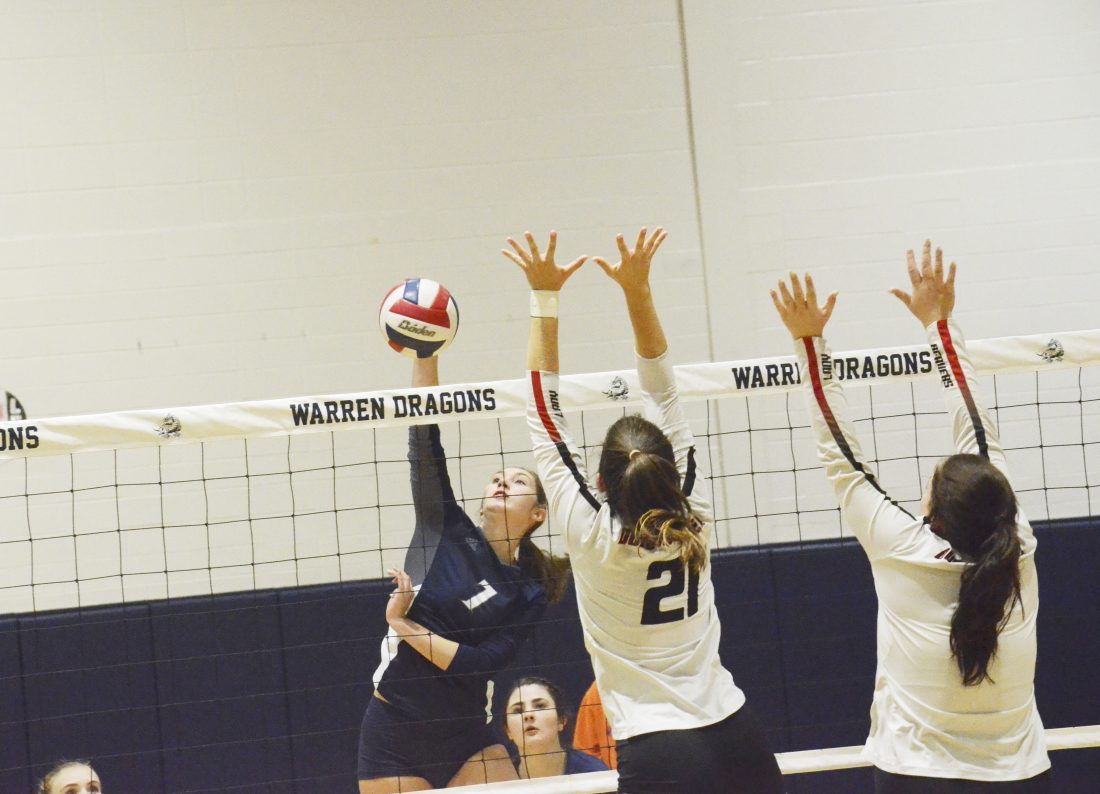 Warren’s Jordan Sitler goes up for one of her 15 kills in a thrilling win over previously unbeaten DuBois on Thursday.

It was Nyquist and the attack led by Wortman, Jordan Sitler and Olivia English that got the Dragons (10-6) back in it in Game 1.

A kill by Sitler got them within 15-10 after the slow start, and they pulled to within two, 19-17, after a Wortman attack. DuBois took the next three points and looked as if they might withstand the rally, but it wasn’t to be.

English came up with a kill, followed by a big block and Hannah Shattuck tied it 23-all with a kill of her own. The two teams took turns trading points until, tied at 25-all, Sitler put it away with a pair of attacks.

“We’ve just been gaining confidence as the season goes on,” she said.

She looked a lot like another former Dragon middle who she played with, Lydia Latimer, who is now starring for Division I Cleveland State as a freshman.

“Sue (assistant coach Sue Baldensperger) told me my freshman year that I looked just like Lydia when she was in 8th grade,” she said. “It made me strive to be like her and I just used that to get better.”

Game two was all Warren.

They started out with a 9-0 run of their own, but they didn’t let DuBois come back.

Twice the Beavers (15-1) got within six, but each time Warren had an answer.

But they all knew that DuBois, which six sets all season coming in, would give them their best shot in the third.

“I knew that third game was going to be tougher,” Dolan said. “There were some real nice points at the end of it.”

It was the seniors, Wortman and Nyquist, that closed it out, a brilliant final chapter in their home careers.

“I attribute a lot of it (strong play in second half of the season), to the leadership that we have,” Dolan said. “They are such good friends with each other, but practices are really intense and they really get after each other. It’s just a will to win.”

“It was fun an I know it made them (Wortman and Nyquist) feel good,” Sitler said.

The Dragons now turn their attention to a District 10 title defense, which begins against Hickory on Wednesday (Cochranton H.S., 5 p.m.).

“They are a solid program,” Dolan said.

Warren’s Jordan Sitler goes up for one of her 15 kills in a thrilling win over previously unbeaten DuBois on Thursday.

Sheffield’s Caidence Anderson passes to a teammate during the second set of a match against Elk County Catholic at Sheffield High School, Thursday, Oct. 17, 2019. The Lady Crusaders remained undefeated on the year with a 25-12, 25-17 and 25-17 sweep of the Wolverines.

Warren senior Grace Wortman goes up for one of her team-high 16 kills in a thrilling win over previously unbeaten DuBois on Thursday. Wortman and fellow senior Lex Nyquist went off in style in their final home contest.