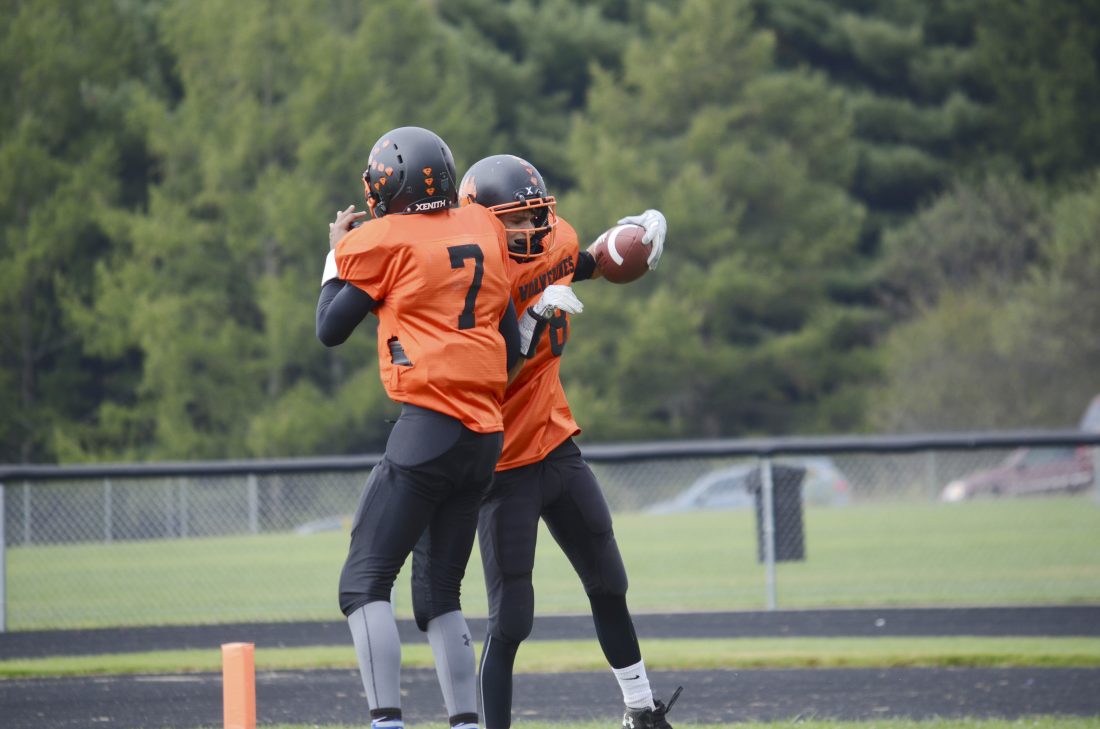 For the first time in 23 games, the Sheffield Wolverines broke down in a postgame victory huddle, letting out a wave of emotion that only victory can bring out.

The entire team then went over to senior Walker Kyler who was gulping down water, exhausted on an 80-plus degree day from having to play nearly every snap at a multitude of positions in a 31-20 win over Cameron County on Wolverine Mountain that snapped their 23-game losing streak dating back to 2016.

“It means so much,” said Sheffield coach Chris Korbar. “You see this kid right here (points to Walker Kyler). He’s done so much. He played every position that he could today. Quarterback, running back, tackle, receiver, guard, linebacker, corner. Those are the types of kids we have at Sheffield right now. These kids have all the heart in the world. They’re a little tired, but that’s what it’s all about right there.”

Not only did they win, but they were also convincing in doing so.

Caden Smead and Aujamier Slappy-Washington had monster days, and it all started right from the opening kick. 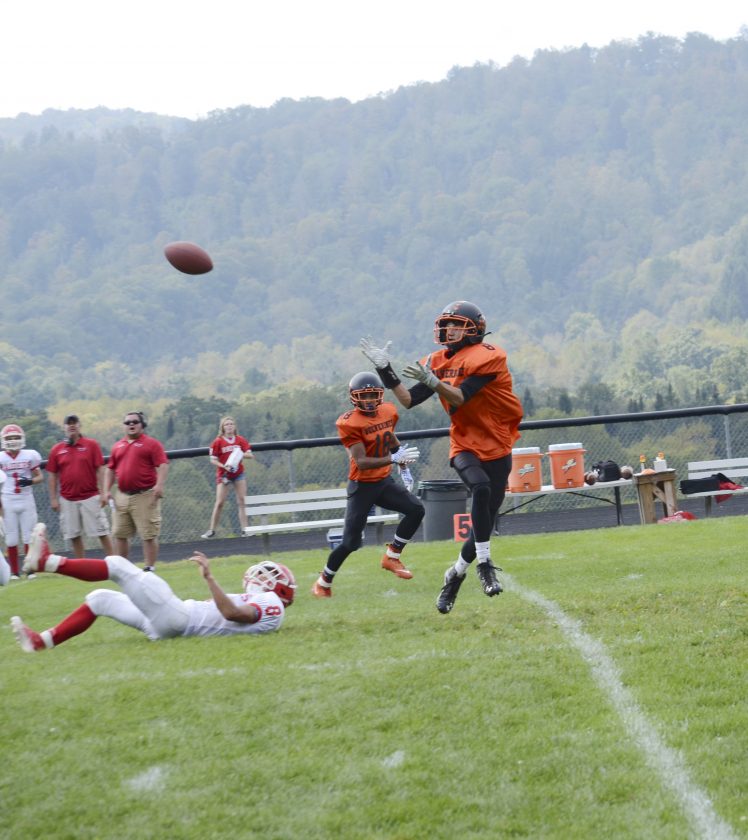 Sheffield wide receiver Caden Smead gets set to haul in a long touchdown reception during the first quarter of Saturday’s game against Cameron County.

The do-it-all Kyler executed a successful onside kick that the Wolverines (1-4) recovered, and they wasted no time showing off their high-powered passing game.

Slappy-Washington got plenty of time to throw and went up top to Smead, who did the rest. The result was a 6-0 lead just 12 seconds into the contest.

It was the beginning of something special for both. Smead had an even 200 yards receiving with a pair of scores and his fourth-quarter ‘Pick Six’ sealed the victory.

Slappy-Washington, meanwhile, threw for 348 yards and three touchdowns, ran for another score and also intercepted a pass on defense.

Cameron County drove inside the Sheffield 20 on their initial possession, but Jihad Bennett pounced on a Red Raider (0-4) fumble at the 17 to thwart the scoring attempt. 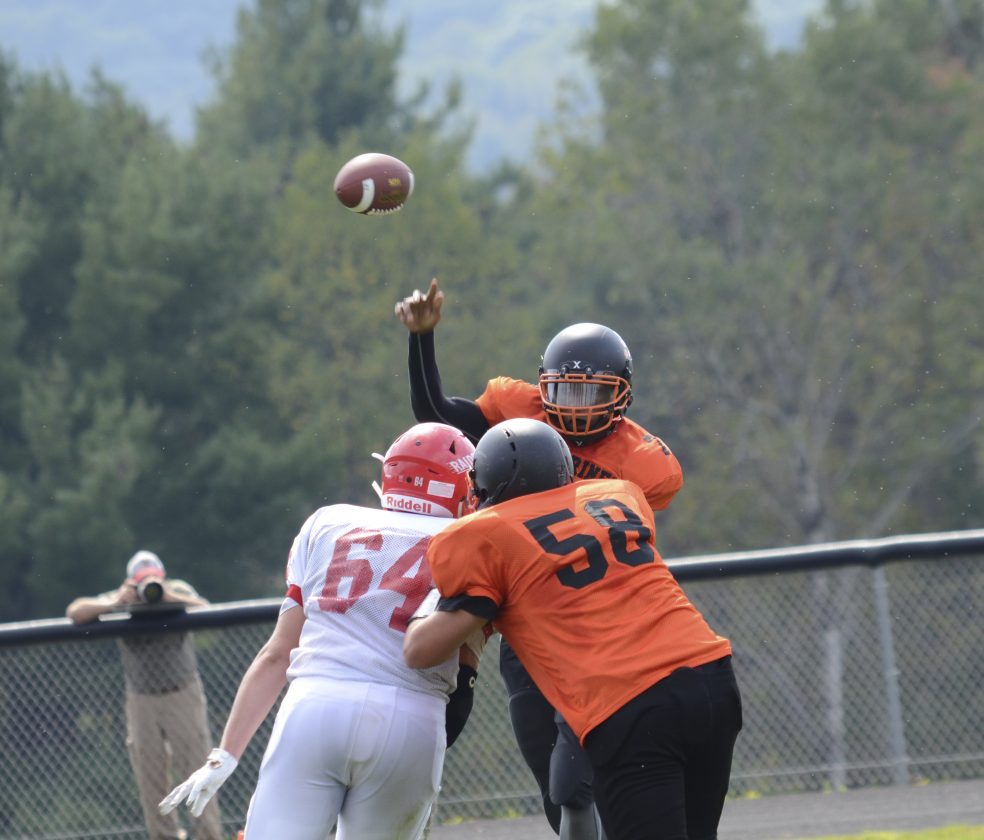 Sheffield quarterback Aujamier Slappy-Washington gets set to throw a pass during the first half of Saturday’s game against Cameron County on Wolverine Mountain as Jake Davidson (58) blocks. Slappy-Washington had a big day in the victory, throwing for 348 yards and three touchdowns, rushing for another score and intercepting a pass on defense. Davidson had a fumble recovery

The Slappy-Washington to Smead connection struck again on the third play of the drive. This 67-yarder looked a lot like their first score and gave Sheffield a 12-0 lead midway through the first quarter.

Red Raider running back Dylan Baney, who went over 100 yards on the ground for the game, struck quick for his squad, giving them their only score until the fourth quarter on a 38-yard run that cut the deficit in half.

No matter, as the Wolverines responded by scoring for the third time in 17 offensive snaps. It was Slappy-Washington again showing off his big arms, this time connecting with Mirahn Price for a 51-yard score.

Korbar decided to go to more of an air attack in 2019, and this was the best it looked all season.

“That’s exactly what it should like every game,” Korbar said. “We’ve been close a couple of times. Today they put it together and did what they needed to do. I teach resiliency and perseverance and excellence of execution, and they executed in the first half.” 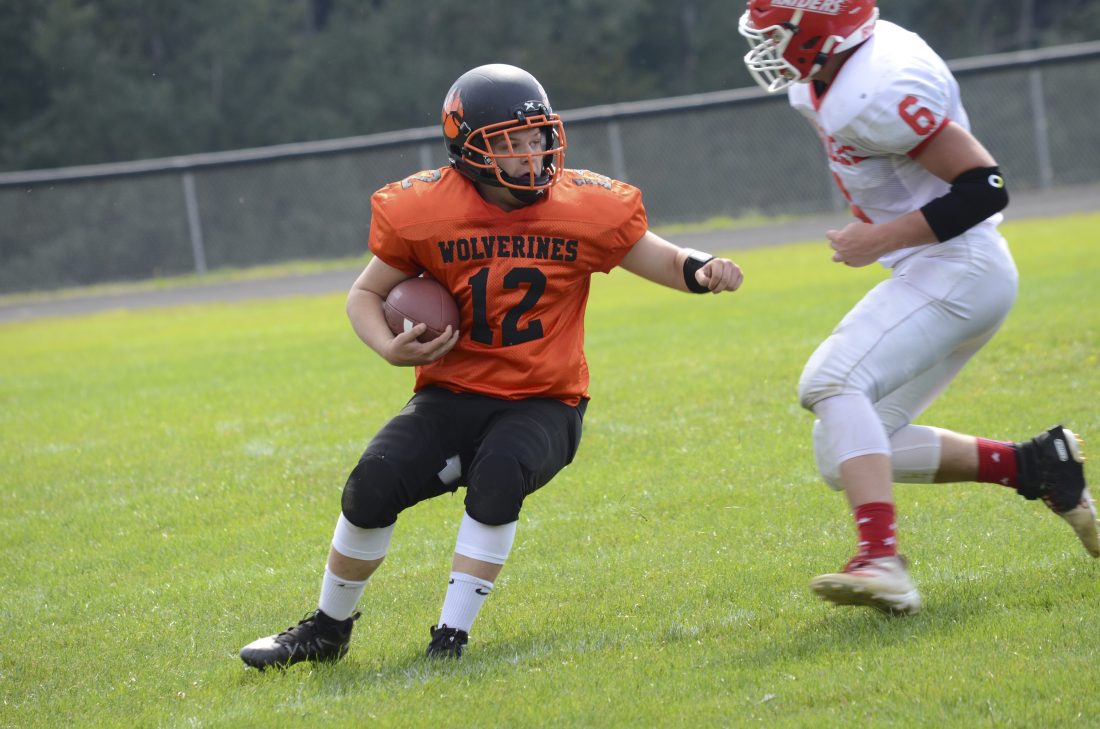 Cameron County answered by driving deep into Sheffield territory for the second time in the half, but the Wolverine defense held firm, stopping them on a fourth down from the 8-yard line.

The quick-strike offense of the Wolverines went back to work, as a 52-yard pass from Slappy-Washington to Smead led to the quarterback calling his own number for a 26-yard rushing touchdown that gave Sheffield a 24-6 lead going into halftime.

Fatigue got to both teams in the second half on an unseasonably warm late September day.

The Wolverine defense was strong, as Jake Davidson had a fumble recovery and they held Cameron County to -1 yards of net offense in the third quarter.

Smead took matters into his own hands in the fourth quarter by stepping in front of an Ebon Jackson pass and racing 70 yards for a score. 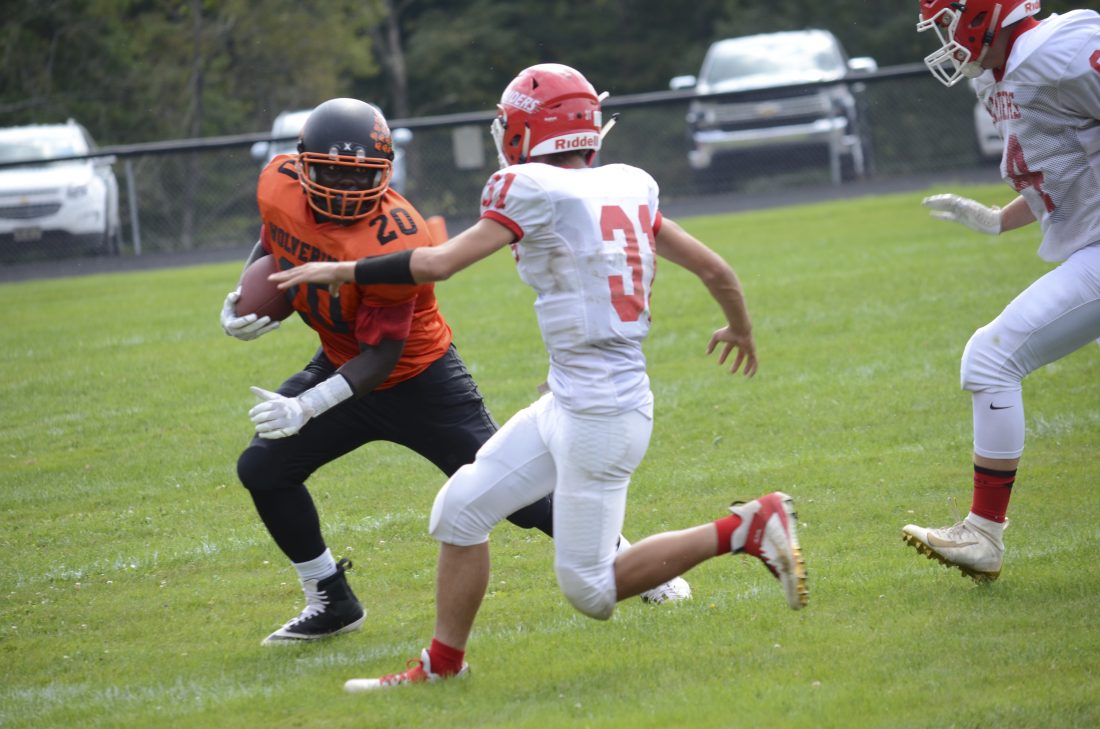 “This feels awesome,” Korbar, who was given a postgame ‘Gatorade Shower’ by his players, said. “Definitely a stepping stone that we needed to accomplish. This is something that can bring these guys together and get us moving forward on the right track.”

For the seniors, led by the likes of Smead, Kyler, Jakob Vinopal, Kevin Marfink and others, this was a long time coming. For the entire team, it was a moment to let out all the emotion and celebrate.

But, as Korbar pointed out, this is just the beginning.

“It’s Win No. 1,” he said. “It’s the start of something as far as I’m concerned. This is something that needed to happen. No more of that 23 junk anymore. We’re win No. 1 going forward.”

Sheffield quarterback Aujamier Slappy-Washington gets set to throw a pass during the first half of Saturday’s game against Cameron County on Wolverine Mountain as Jake Davidson (58) blocks. Slappy-Washington had a big day in the victory, throwing for 348 yards and three touchdowns, rushing for another score and intercepting a pass on defense. Davidson had a fumble recovery

Sheffield wide receiver Caden Smead gets set to haul in a long touchdown reception during the first quarter of Saturday’s game against Cameron County.