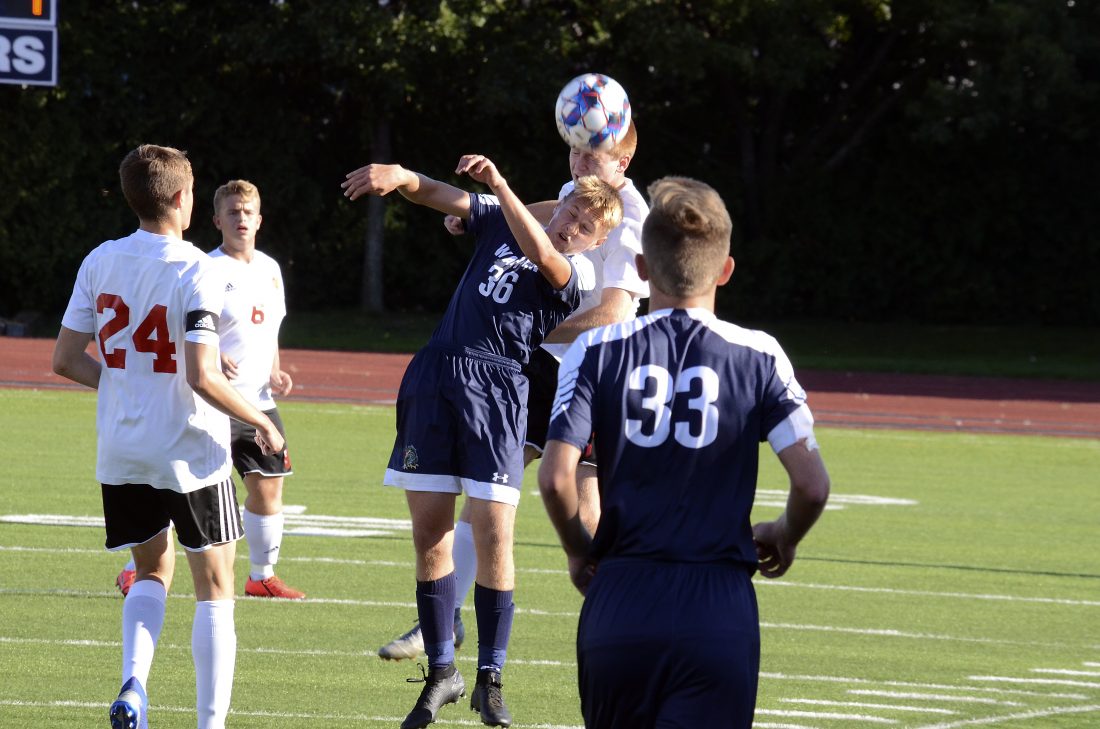 Times Observer photo by Brian Hagberg Warren’s Zane Anderson (36) battles a Bradford player for possession during the first half of their match at War Memorial Field, Wednesday, Sept. 18, 2019. The Owls came away with a 4-1 Region 5 win over the Dragons.

Isaiah Pingie scored a pair of first half goals to lead Bradford to a 4-1 win over Warren at War Memorial Field Wednesday.

” It was a typical high sprited game between Bradford and Warren,” Dragons coach Denny Flatt said. “We came out a little flat in first half and a couple mistakes cost us.”

A Warren squad that more closely resembles a M*A*S*H* unit than a soccer team at the moment, had to scratch keeper Ian Darling just before kickoff after he reaggrivated a nagging injury during warm-ups.

“The injury bug has bit us hard,” Flatt said. 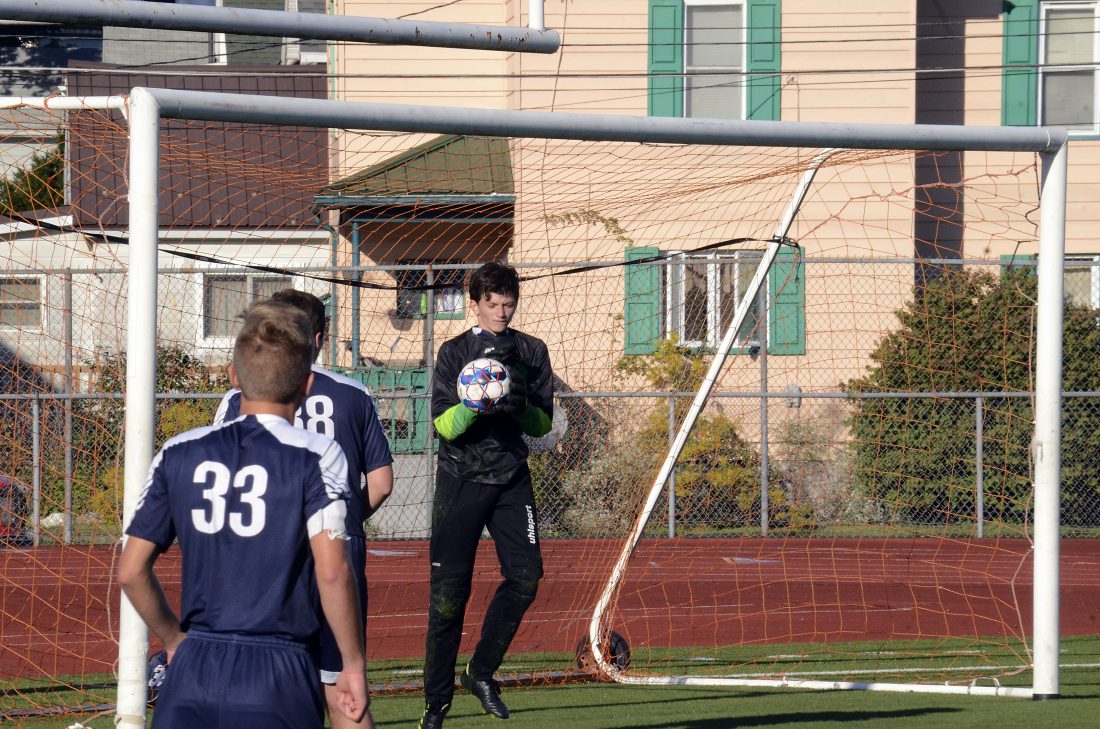 Times Observer photo by Brian Hagberg Warren keeper Alex Ferry makes a save during the first half of a match against Bradford at War Memorial Field, Wednesday, Sept. 18, 2019. Ferry was a late add to the starting lineup and came up with some big saves, but the Dragons fell to the Owls, 4-1.

Alex Ferry stepped in and was tested early.

The Owls (7-1 overall, 3-0 Region 5) forced a Dragons (3-3, 1-2) turnover in the Warren offensive zone. Bradford quickly moved the ball ahead and Pingie got past the defense down the right side. He fired just as Ferry came out to challenge and tucked it in the far corner for a 1-0 lead just 2:20 into the match.

Warren nearly got the equalizer at the 12:24 mark. John Page got possession and sent a crossing pass to Ryon Flatt. Flatt tried to go top shelf, but the ball sailed just over the crossbar and out.

Three minutes later, Pingie picked up his second of the half. On a nearly identical play, Bradford got the ball deep in its own end and sent a long pass down the right side. The ball stayed just over the head of the Dragons defenders and went right to Pingie who fired a rocket into the net.

“They were playing off our touches and we have to improve that,” Flatt said.

With just under 10 minutes to go in the half, Bradford and a chance to extend the lead. Alex Marrone got a rising shot off from just outside the box. Ferry was able to get his hands on it to push the ball high and keep it a 2-goal game.

Warren was able to cut the deficit in half with 5:30 to play. JT Blum won a battle for the ball on the left side deep in Bradford territory. Once he got possession, he sent a pass to Lindell who carried the ball to the middle and fired top shelf and in.

The Owls had a corner kick that was blocked. The rebound came right to Tate’s foot who had a wide open net to shoot in and gave Bradford a 3-1 lead.

“We made it 2-1 and had the momentum going our way and gave up a dumb goal,” Flatt said. “That was a goal that never should have happened.”

Lindell nearly created a second Warren goal with just under two minutes to go in the half. He fought through a number of Bradford defenders to get free down the middle. He sent a pass to Flatt who got a shot away, but Zachary Williams was there to make the stop and keep it 3-1 at the half.

Ferry came up with a trio of 10-bell saves in the first 20 minutes of the second half to keep the Dragons in striking distance.

“Give credit to Alex Ferry,” Flatt said. “He got the nod at the last minute and responded well. He had a solid game.”

The Dragons had a great chance with just over 15 minutes to play. Lindell got free behind the defense but the pass was just a step in front of him and Williams covered up before Lindell could get his foot on the ball.

Warren thought it would get a penalty kick when it appeared a Bradford player had a handball in the box. The whistle did not blow, however, and the Owls quickly turned the ball back upfield. McGee got the ball just off the right goal post and sent a shot to the far side for the final tally.

“I liked our intensity in the second half better than the first half,” Flatt said. “But we’ve got to put the two halves together.”

Between this game and Monday’s loss at Slippery Rock, Flatt said the Dragons have to work on getting off to better starts.

“These last two losses don’t sit well with us,” he said. “We’ve had two bad halves the last two games. We came out flat in both. We have to come ready to play. The first 40 minutes is just as important as the last 40 minutes.”

Holden Creal scored the goal while Ferry and Will Nebinski combinded for the shutout.