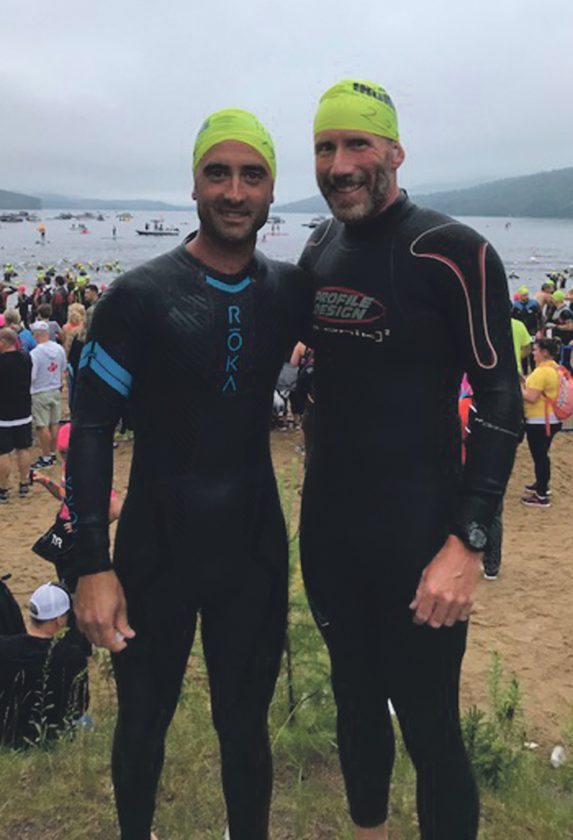 Photo Submitted to Times Observer From left Sam Sivak and Dr. Jim Roberts getting ready to compete in the Mount Tremblant Ironman Triathlon in Quebec, Canada.

This was the first Ironman finish for both Sam Sivak and Dr. Jim Roberts.

Ironman Triathlons are organized by the World Triathlon Corporation (WTC), and consists of a 2.4-mile swim, a 112-mile bike, and then a marathon.

Each event has cut-off times in order to advance to the next event. 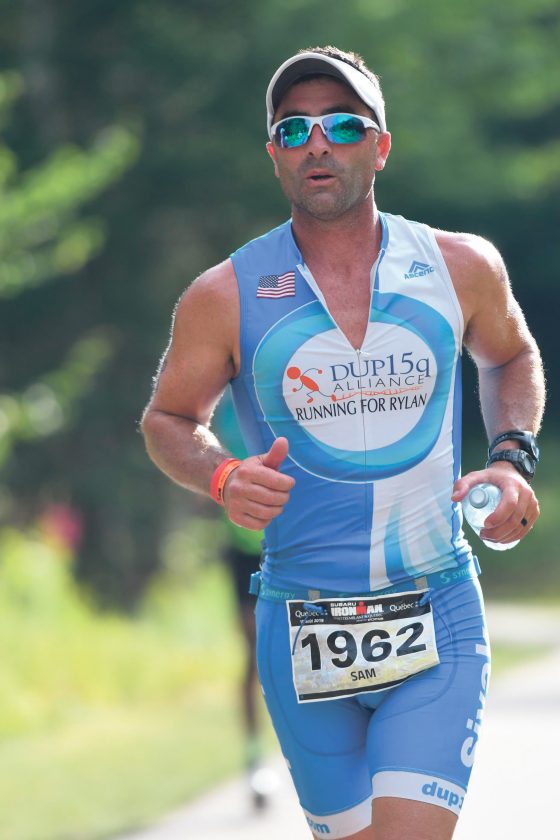 Roberts has attempted an Ironman in the past, but did not complete the race.

“I’m not the best swimmer, so I spent a lot of time working on that. I attempted an Ironman before, but did not make the bike time cutoff… so I needed to work harder on the bike this time too,” said Roberts.

Sivak said, “I just threw it out there as a joke to my running friends. Then Jim Roberts surprised me and took me up on it. Before I had time to think it over, he’d signed up, I’d bought a tri bike, and then the research and training began.”

Sivak also said he competed on behalf of Running for Rylan, a nonprofit which he co-founded. The nonprofit is working on a program to provide financial assistance to families effected by Dup15q syndrome for safety equipment that is not covered by insurance.

Both Sivak and Roberts have competed in their share of phsyical challenges.

“One of my goals is to challenge myself to events I deem too difficult for me to do,” said Sivak.

In 2012, Sivak competed in a Tough Mudder finishing in the top half percent in the world, and, in 2015, in the Solo Kinzua Country Tango finishing fourth, and 2017 in the Boston Marathon.

Roberts completed the Maui Oceanfront Marathon in January in 2019, completing his goal of 50 marathons in all 50 states.

He has completed 59 marathons overall including running the original marathon course in Athens, Greece.

Despite all the physical challenges the pair has accomplished, training for the Ironman was challenge enough.

“Having Jim was invaluable in keeping training on track and fun, as well as his experience of having been involved in triathlons before,” said Sivak.

“Sam and I did quite a bit of training together including long swims and long bike rides, and of course running. We also competed in a half-Ironman about six weeks prior to the Ironman at Tupper Lake, N.Y.,” said Roberts.

Sivak wanted to thank his wife and five teenagers for their support.

“I train before the kids wake up in the morning and then in the evening around all the sports that they are involved in,” said Sivak. “It certainly helps that (my wife) is a marathon runner and that all the kids are involved in sports of their own and understand the importance of training. The most important part of being successful in the Ironman for me is that I now get to spend more time with the family and support them in their goals.”

“I finished in the top half of the field at the Ironman in Mount Tremblant this year, beating my… goal,” said Sivak.

“Finishing an Ironman, after previously not finishing, was very important,” said Roberts. “More important than my time, really. You are allotted 17 hours to finish and there are cutoffs along the way. So as long as I finished under 17, I was going to be very pleased.”

“I can safely say I couldn’t have achieved these goals without our amazing athletic friends and acquaintances here in Warren,” said Sivak. “Warren has a large number of talented athletes of all ages and we all get a thrill out of competing to push each other, cheering each other on and celebrating each others successes.”