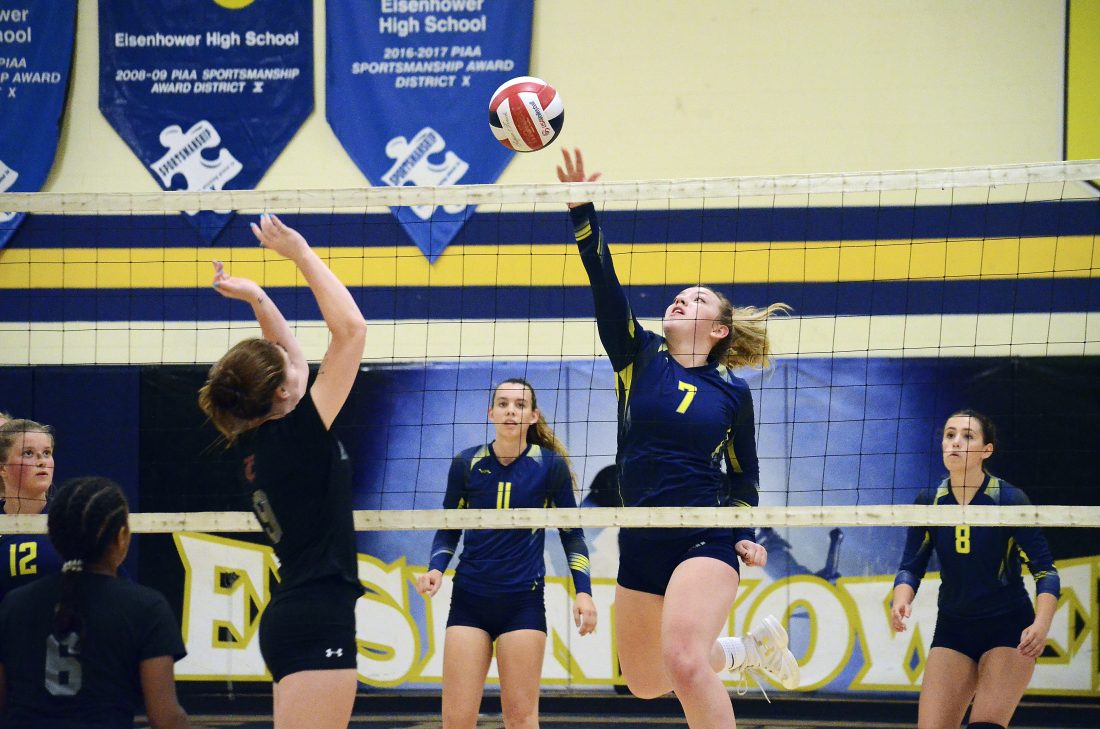 Eisenhower’s Currie Hultman (7) puts down a kill in front of Tidioute’s Jenna Hunt (9) during the first set of their match at Eisenhower High School, Thursday, Sept. 12, 2019. Hultman had 13 kills in the match to lead the Knights to a sweep of the Bulldogs.

Outside of an 8-0 run in the second set, Thursday’s clash between Warren County rivals Tidioute and Eisenhower was about as even as it could be.

The Knights came away with a 3-0 sweep over the visiting Bulldogs, but TCCS made Eisenhower earn every point.

“They’re a scrappy team,” Eisenhower coach Scott Olson said. “They let us make mistakes and we weren’t as aggressive as I want us to be.”

Hultman served the Knights to the first three points of Set 2, but the Bulldogs came back to tie it at 4. Nakiesha Krouse got a big block on Emiley Wheeler to give TCCS a 5-4 lead. Back-and-forth the set went as the teams tied at 6-6, 7-7 and 8-8. 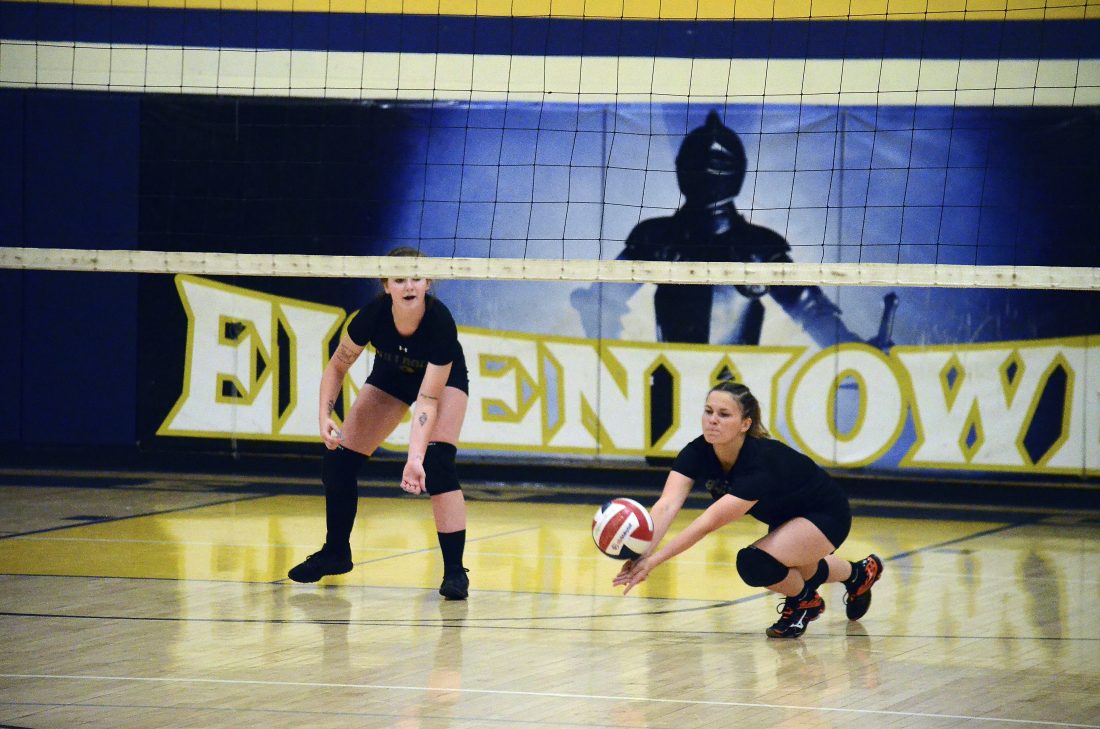 Tidioute Charter’s Shelby Proctor (right) lunges to receive a serve while teammate Jenna Hunt (left) looks on during the second set of their match against Eisenhower at Eisenhower High School.

“We need to find more consistency,” Olson said. “We’re erratic because we’re young. The underclassmen just haven’t caught up to the speed they need to play all the time.”

Eisenhower looked as though it would carry the momentum from the big second set win through to the third. The Knights again went up early, but the Bulldogs wouldn’t stay down and tied the set at 5-5. TCCS jumped on top, 10-6, but Eisenhower came back to tie it at 13. The Knights retook the lead at 17-16, but the Bulldogs scored the next two to go back on top, 18-17. The teams again traded points to 21-21. TCCS scored the next three and was poised to send the match to a fourth set. The Knights got a side out and Hultman served four straight to put the match away with a 26-24 win.

“I had no worries because we’ve got a good service rotation between Currie, Rayna (Hultman) and Emiley,” Olson said.

“Currie is a standout offensively and defensively,” Olson said. “Emiley came up big and Rayna went after seven or eight balls and made some ridiculous saves.”

Lilly Smyth and Bridget Gourley each had three aces in the win.

Destiny Nelson had 11 aces and four assists, Logan Grove had four kills and three aces and Phoebe Tower had five digs and four aces in the win.

Eisenhower will compete at the Iroquois Tournament Saturday.

It’s often said things happen in threes, and that was certainly true in Youngsville Thursday.

The Eagles got a 3-0 win over Erie First Christian. They also got three firsts on the year. The first win of the season, the first Region 3 win of the year and new head coach Vicky Montecalvo’s first varsity dual match win.

“We needed this win under our belts,” Montecalvo said. “The girls worked really hard for it.”

“(The set) was back-and-forth due to our mental mistakes,” Montecalvo said.

Youngsville cleaned up those mistakes in the second and rolled to a 25-15 win.

“I told the girls to just erase the first game,” Montecalvo said. “We did much better.”

The Eagles made multiple substitutions in the third set and came away with a 25-22 win to complete the sweep.

“This was a team effort win,” Montecalvo said.

Victoria Bull led the attack with three kills and Mallory Sherrard had a pair of kills in the win. Kamryn Weissinger had four aces and Amber Evans had eight aces. Evans also filled in at setter as Jena Wilson is still out with injury.

“Amber stepped in a did a great job,” Montecalvo said. “She’d much rather be hitting, but she is our most seasoned setter. It’s just a bit of an adjustment period because the hitters have been used to Jena.”

The Eagles will compete in the Brockway Tournament Saturday.

“When we beat St. Marys the first game the other night, they were so pumped. They played like they knew they could beat them the rest of the night,” said Sheffield coach Melissa Lemay. “When we lose the first set, we don’t always play like that.”

Normal libero Marissa Grubbs had to step in and play outside hitter, and she led the Wolverines with 4 kills and 9 digs. Megan Johnson had 11 assists at setter.

“Give Kane credit, they are always well-prepared,” Lemay added. “They can hurt you with their starters or bench.”

Sheffield is at the Brockway Tournament on Saturday.