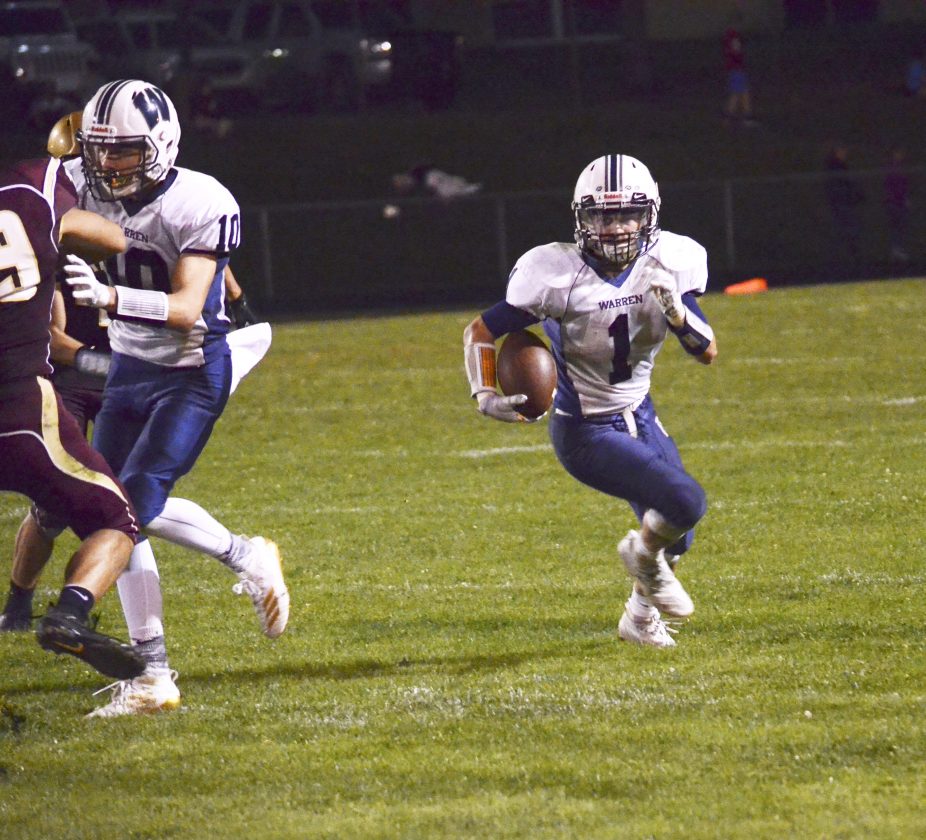 Warren's Ryan Arnold (1) gets a block from Alex Anderson (10) as he hits the open field. Arnold scored three more touchdowns in the Dragons' win. Arnold, Anderson and the Dragons take on Meadville tonight in a Region 7 showdown at War Memorial Field.

You can throw out the records when Warren and Meadville get together, but in the case of their meeting tonight at War Memorial Field, the records carry a lot of weight.

This is the beginning of a critical 3-game stretch for the Dragons that will determine their fate within the region.

“It’s going to be a good ball game,” said Warren coach Mark Morelli. “The physicality level is going to be the key to the game in my opinion. We have to be able to match them, toe-to-toe. If they slug us we have to slug them back. We have to approach this game like it’s Ali-Frazier.”

The Bulldogs are going on what they call ‘Meadville Vengeance Tour 2019.’

They crossed another box by getting revenge on the Bison, and the Dragons are hoping to prevent them from doing the same to them, following their miracle win at Bender Field last season.

To do so, they will have to stop a strong Meadville rushing attack, which is led by their much-improved offensive line.

“The offensive line we’re going to face might be the best offensive line we’ve seen all year,” Morelli said. “They’re not overly big, not as big as some of the teams they’ve played, but they’re very sound fundamentally and they’re technicians upfront. That’s going to be an interesting battle in the trenches.”

“Their fullback is one of the better backs in District 10,” Morelli. “They mix it up. They’re balanced with who they give the ball to running back-wise. The fullback is the guy that gets the tough yards between the tackles.”

On the other side, Meadville will be tasked with stopping a Warren offense that can strike in a variety of ways.

Like Meadville, the Dragons boast a smaller offensive line, but one that is extremely athletic.

They are tasked with opening holes for a rejuvenated running game, led by Ethan Benedict’s 130-yard performance against North East.

Micah Passmore is a true dual-threat quarterback, passing for 541 yards (6 touchdowns, 4 interceptions) and rushing for 298 yards and 7 TDs. Jamo Douvlos (121 yards) is the fullback and a guy the Dragons rely on to get tough yards on the inside.

Ryan Arnold and Alex Anderson are true weapons on the perimeter. Arnold has scored a touchdown five different way through four games and has 202 receiving yards. Anderson leads the team with 224 receiving yards, 95 of which came on a school-record connection with Passmore in the win over DuBois.

“Last week we got the running game going on the outside,” Morelli noted. “We need to be more consistent between the tackles. We’re looking to take advantage of our speed and skill set.”

Both teams have similar defensive stats, with the Dragons allowing 25.8 ppg. and the Bulldogs 23.8.

Special teams have been a strength for the Dragons, with Sawyer Mohney automatic on extra points and Arnold a threat to go the distance every time he touches the ball in the return game.

“We’re going to continue to do what we’ve been doing on special teams,” Morelli said. “Coach (Ken) Hinton and Coach (Shawn) Wilson have been in charge of our special teams. They do a great job with personnel, strategy and different things we can do to help our special teams.”

The fun gets underway from War Memorial Field at 7 p.m.

“You have to earn respect, and we have another opportunity to do that,” Morelli said.